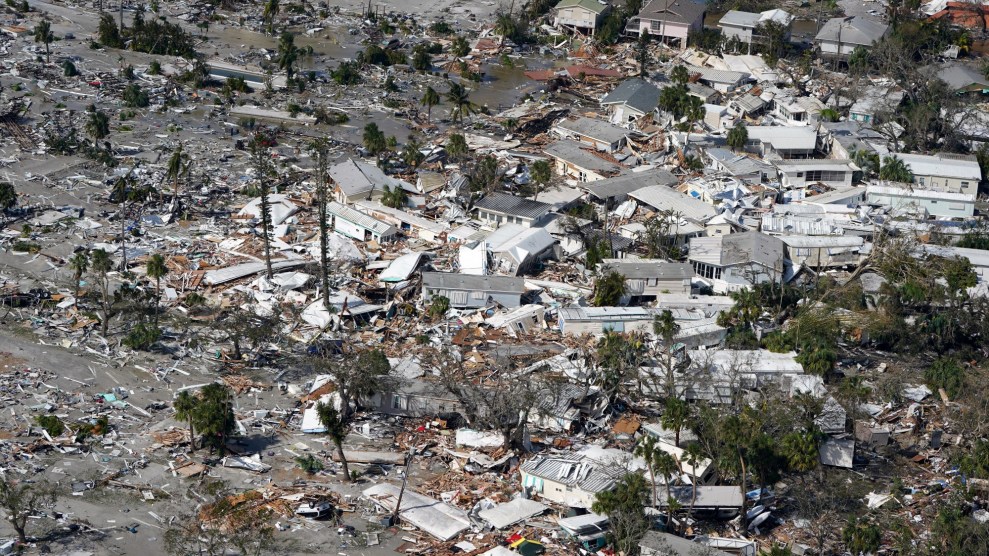 Damaged homes and debris are shown in the aftermath of Hurricane Ian, Thursday, Sept. 29, 2022, in Fort Myers, Fla. Wilfredo Lee/AP

Hurricane Ian, one of the most powerful storms ever to hit Florida, has been ripping through the state, leaving behind millions of dollars worth of damage and reports of fatalities. Today, the Federal Emergency Management Agency briefed President Joe Biden on the storm’s impact.

“This could be the deadliest hurricane in Florida’s history,” said Biden after the briefing. While no official death toll has been announced, according to Biden, commissioners and mayors are worried about the potential for massive loss of life. The federal government will be covering 100 percent of the costs to clear the debris and any efforts to save Floridian lives. Biden also said the federal government will also cover the majority of the costs to repair public buildings like schools and fire stations.

The government will also be providing individuals who have little or no insurance with $37,900 for home repairs, as well as another $37,900 for property loss.

After a conversation with Gov. Ron DeSantis, Biden declared an official disaster in Florida. DeSantis described the storm in a press conference as “historic” and a “500-year event”.

“We’ve never seen a flooding event like this,” said DeSantis during a press conference on Thursday.

Photos and footage of the storm’s damage are absolutely shocking, with many videos showing homes submerged under water and floodwaters pushing cars down the street. In Jacksonville, one video from First Coast News showed an entire shopping center sign crumbling to the ground right before a reporter was about to go on-air. A hospital in Port Charlotte had part of its roof ripped off by Hurricane Ian’s winds, forcing ICU patients to be moved to other floors.

Currently, there are 1,300 first responders on the ground, as well as 300 ambulances. The Biden administration has also pre-staged 110,000 gallons of fuel, 18,000 gallons of propane, 3.7 million meals, and 3.5 million liters of potable water.

DeSantis thanked both FEMA and the Biden administration for their response to the crisis. On Tuesday, during an appearance on Fox News, DeSantis, normally a vocal Biden critic, said, “It’s my sense that the administration wants to help. They realize this is a very significant storm.”

While there’s a lot of focus on Florida, Biden also attempted to make clear that the victims of Hurricane Fiona in Puerto Rico had not been forgotten. The president said that as soon as he’s able, he plans to travel to both Florida and Puerto Rico to thank first responders directly.

“As long as it takes, we’re going to be there,” said Biden. Hurricane Ian is still in Florida and is expected to make its way through Georgia, South Carolina, and North Carolina, with an anticipated 12 inches of rain in certain areas.