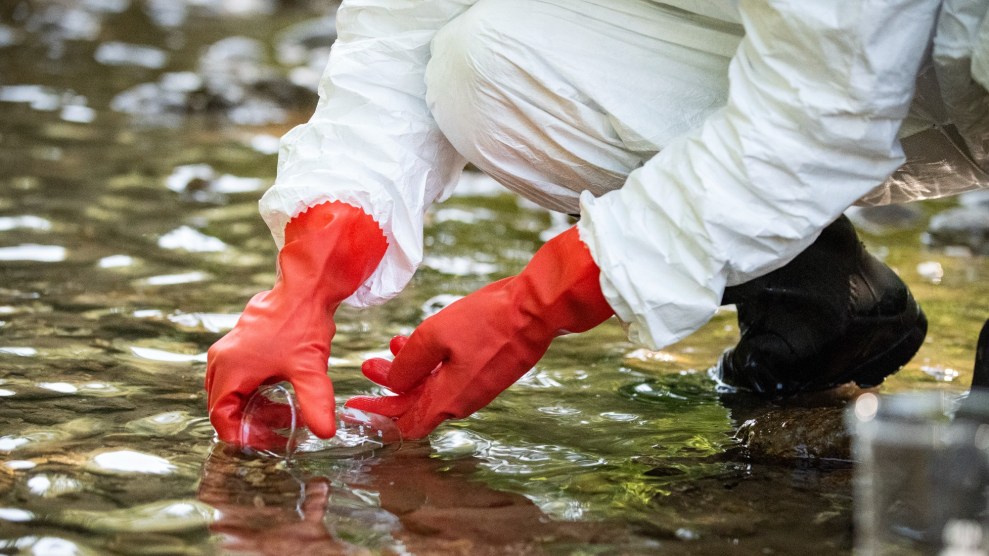 In Puerto Rico, cheap labor and generous tax breaks—since 2017, more than $100 billion worth—have made US-based pharmaceutical firms the biggest economic players in town. Drug manufacturers have brought in tens of thousands of jobs, albeit with a tax-break price tag of more than $1 million each. But a new report by the nonprofit Center for Popular Democracy and advocacy group Hedge Clippers suggests that Big Pharma’s footprint on the island has come with other serious costs: illegal dumping of toxic waste, pollution and depletion of groundwater, and violations of other vital Environmental Protection Agency regulations. The report, released Tuesday, paints a disturbing picture, holding US pharmaceutical corporations at least partially responsible for Puerto Rico’s disproportionately high rates of asthma and cancer. The sum of its findings: a pattern of environmental racism resulting in more than a dozen Big Pharma–related Superfund sites, with the complicity of federal and local authorities.

Puerto Rico is home to some 500 EPA-designated, toxin-packed Superfund sites, half of which were “active” as of July, meaning they pose an ongoing risk to the surrounding communities and ecosystems. Eighteen of its active sites are on the EPA’s “national priorities list,” which tracks areas most likely to release harmful compounds; of those, 15 are linked to the pharmaceutical industry. And Superfund sites don’t include every area where industries have improperly disposed of hazardous waste—just the most serious health and environmental threats.

The island’s Big Pharma waste sites belong to some of the world’s largest and best-known pharmaceutical companies, including Pfizer, Abbott Chemical, Johnson and Johnson, Roche, and GlaxoSmithKline. One-third of the pharmaceutical and medical manufacturers operating in Puerto Rico have been cited by the EPA for environmental malfeasance in just the last three years, meaning they flouted regulations while Puerto Ricans reeled from the deadly effects of Hurricane Maria. Of those violations, half took place within three miles of low-income neighborhoods of color.

One-third of pharmaceutical and medical manufacturers in Puerto Rico have been cited by the EPA for environmental malfeasance in just the last three years.

One Pfizer facility, for instance, has been in continuous violation since 2020 of federal limits on lead and copper in drinking water. An Amgen facility has repeatedly failed to report discharged chemicals, and neglected to monitor its water treatment system for pathogens in 2021. The surrounding rivers are polluted with ammonia, arsenic, phosphorus, and selenium, which the EPA says is likely linked to Amgen and other industrial waste producers.

Most shocking, perhaps, is the extent to which Big Pharma has polluted the island’s groundwater. Barceloneta, a town on the northern coast that once contained 60 percent of Puerto Rico’s groundwater, has also been host to more than half a dozen pharmaceutical companies. By 1987, 41 percent of drinking water wells in the North Coast region were closed due to contamination. Some pollution in the area is ongoing, but much contamination also remains from earlier decades.

Abbott Laboratories, an Illinois-based medical conglomerate that manufactures supplies from COVID-19 tests to infant formula, was one of multiple companies that allowed chlorinated hydrocarbons—chemicals linked to cancer and immunosuppression—to spill out of underground tanks, according to the EPA. Those storage sites are often located near public drinking wells, and their toxins can’t be filtered out by the porous limestone aquifers used to move drinking water. Via sinkholes and sprinklers, the compounds contaminate the groundwater that most Puerto Rican farmers use to irrigate their crops. Other companies have been caught dumping pharmaceutical waste into the region’s Manatí River, killing fish hauls and livestock, giving fishermen sores, and causing the development of unwanted vegetation and odors. Although those violations were first caught decades ago, the region’s water remains unsafe.

Pharmaceuticals and medical manufacturing are Puerto Rico’s biggest industries, accounting for just under a third of the island’s 2017 GDP. It’s a sector that used to be even bigger, thanks to plush tax loopholes for businesses in US overseas territories, and local laws that for twenty years allowed drug companies to enjoy a corporate tax rate of zero. The COVID-19 pandemic, and anxieties about China’s economic growth, have renewed conversations about once again expanding drug manufacturing in the United States’ main Caribbean colony. It’s an idea supported by leaders like former Puerto Rico Gov. Aníbal Acevedo Vilá, as well as ex–Trump administration officials.

But mainland pharmaceutical giants, as the report shows, are major contributors to the atrocious water quality that millions of Puerto Ricans deal with daily. Recent data is limited, but a report from the National Resources Defense Council found that, as of 2015, more than 99.5 percent of Puerto Ricans relied on water that failed to meet Safe Water Drinking Act standards. PRASA, the island’s water utility, has a history of being fined by the EPA for failing to comply with Clean Water Act safety requirements.

Now, the climate crisis is making the water situation even more dire: after Hurricane Maria, residents of the town of Dorado were forced to drink well water from a Superfund site. In that case, the pollution wasn’t conclusively tied to a pharmaceutical company—but ones nearby had been the subjects of EPA enforcement actions for multiple infractions. Hurricanes and other disasters, more severe and unpredictable as a result of climate change, also always threaten to spread contamination from polluted sites.

The investigation follows previous exposés by the Center for Popular Democracy and Hedge Clippers that revealed workplace abuse and pervasive low wages in Puerto Rico’s pharmaceutical sector. As many as 90,000 Puerto Ricans work to make some of the most important life-saving drugs on the planet—which come, as these reports make clear, at high cost to their own lives.