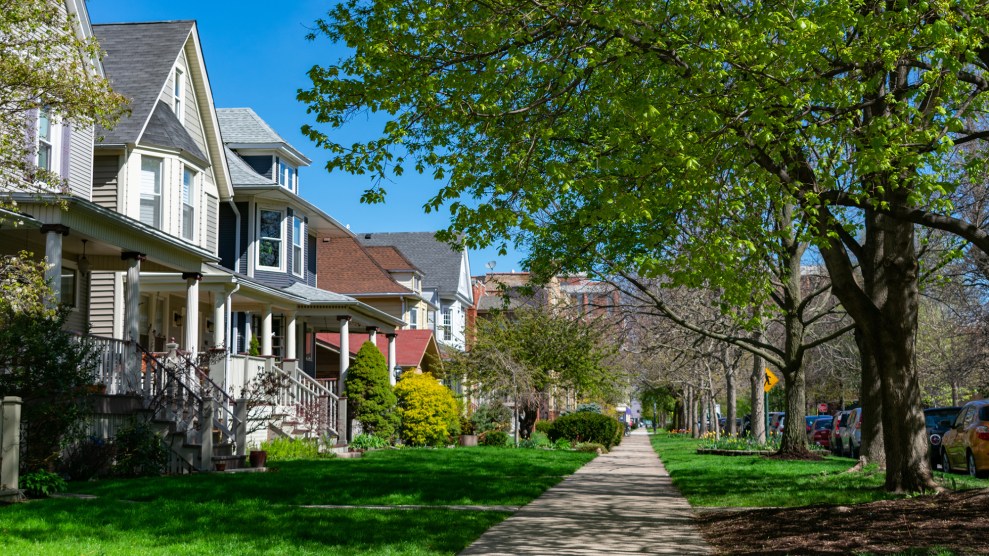 Lawns began as a flex by the uber-wealthy in 17th-century England. (Look how many resources I can waste to replicate nature, when actual nature is right next to my palatial home!) Today, turfgrass has spread like a green plague across the United States, replacing native species and wasting an extraordinary amount of a precious resource—up to 75 percent of an American household’s water is sprayed willy-nilly on the yard.

Lawns are especially problematic in the increasingly hot and dry southwestern US, which is in the grip of its worst megadrought in 1,200 years. So recently officials have been paying homeowners to rip the things out—“cash for grass,” as it’s known. In 2014, the Metropolitan Water District of Southern California allocated $350 million to get customers to remove 165 million square feet of turf. Las Vegas has taken the turf war one step further, mandating that grass be removed and replaced with less-thirsty desert landscaping by 2027.

Good riddance to lawns, but urban planners may need to navigate a potential catch. Turfgrass does one good thing: It’s a kind of air conditioning. As plants photosynthesize, they spit out water vapor (along with oxygen), cooling the surrounding air. This is known as evapotranspiration. Because of this “sweating,” rural areas can be up to 20 degrees Fahrenheit cooler than adjacent cities, where a built environment that’s largely asphalt and concrete instead soaks up the sun’s energy. Accordingly, scientists are encouraging city planners to deploy more green spaces to attenuate this urban heat island effect.

Lawns are “overvalued and overutilized relative to…spaces that can perform far more effectively from a cooling and water use standpoint.”

Ripping out lawns could actually create a little bit more heat, suggests a new small-scale study in the journal Hydrology. On a hot summer day on the Arizona State University campus, scientists monitored three sites with different kinds of landscaping. On one end of the spectrum was a lush “mesic” version with lots of turfgrass, trees, and other water-intensive plant species. On the other was a “xeric” (from the Greek for “dry”) version with desert species, which provide nice flowers for native pollinators and branches for birds. These desert plants need less water and can also be hydrated with targeted drip irrigation, instead of sprayed with a lawn sprinkler. Splitting the difference was an “oasis” plot, which mixed species with high and low water needs.

The researchers found the lush mesic plot to be the coolest, thanks to the evapotranspiration of all of its water-demanding plants. The air temperature of the more sparse xeric plot was on average 5.4 degrees Fahrenheit hotter than the other two—but it also required less water because its native species are adapted to the parched desert climate. Overall, the oasis ended up being a literal middle ground, providing cooler temperatures than the xeric while using less water than the grass-heavy mesic. On these plots of land at ASU, at least, the ideal landscape might be a little bit of grass mixed with native vegetation: It doesn’t provide the major water savings and biodiversity boost of a natural xeric landscape, but at least temperatures don’t climb as high. This is not to say that desert landscaping doesn’t also reduce the heat island effect—it definitely does, especially if the plants provide shade.

There’s a caveat, of course: This study was short-term and happened on a single campus—the amount of cooling your city actually gets from lawns may vary. “That’s one of the tricky things about studying heat,” says University of Arizona urban planner Ladd Keith, who wasn’t involved in the research. “Every different kind of climate and region might have a little bit of a different context, where different lessons need to be learned.”

But overall, says University of California-Berkeley innovation designer Ian McRae, who studies climate resilience in the built environment, lawns are an inefficient way to cool a green space, compared to building out a diverse grouping of native plants that are more aesthetically pleasing, water-efficient, and conducive to biodiversity. “We love our lawns for varying reasons,” McRae says, “but they are overvalued and overutilized relative to the variety of planting palettes available to us to create spaces we want to be in, spaces that can perform far more effectively from a cooling and water use standpoint.” (He wasn’t involved in the new research.)

Much of the cooling attributed to lawns actually comes from the soil itself, McRae says: Since grass is such a short plant, the sun directly strikes the soil underneath it, evaporating the water that’s soaked into the ground.

One particularly powerful solution may be “rurbanization,” or bringing food production into cities.

As the world warms and urban populations grow, more and more city dwellers will be exposed to extreme heat. “That sounds like bad news, but it also means that there’s an opportunity,” says Christa Brelsford, an environmental scientist who has studied cash-for-grass programs at Oak Ridge National Laboratory but wasn’t involved in the new study. “This paper shows that by different choices of landscaping, there are small-scale choices that people make about landscaping in urban forums that can have significant impacts on the experience of heat for people.”

Still, scientists have a few concerns about how this might play out in the real world. For one thing, as the urban heat island effect intensifies, it may become harder for certain plant species to survive in cities. You’d hate to spend time and money on tree-planting campaigns if all your trees will die in a decade. So in addition to further researching how different kinds of vegetation can help cool cities, researchers have to figure out which species can withstand the heat.

For another, when a particularly bad heat wave settles in, even the plants that can survive the heat stop releasing water vapor, a defense mechanism to keep from desiccating. “You lose this evapotranspirational benefit when it’s really hot,” says Ariane Middel, an urban climatologist at Arizona State University and a coauthor of the new paper. Yet that’s when people need cooling the most.

The trick will be greening up cities in a way that provides the most cooling with the least water. “There is no one-size-fits-all kind of strategy,” says the Desert Research Institute’s Rubab Saher, who led the new study. “I wish there were. It’d make our lives so much easier. But it depends, even from one neighborhood to another neighborhood.”

Urban planners might even be able to reduce heat and increase shade in places that can’t support many plants. Scientists are experimenting with reflective roofs and pavements, which bounce the sun’s energy back into space, reducing surface temperatures. And if a neighborhood can’t spare the water to grow thirsty trees, perhaps building a “shade arcade” that spans overhead could provide some relief. This covering could even be made out of the same material as reflective roofs, further boosting its cooling capacity.

“You can have really lovely shade structures that don’t have to be a tree,” says Stephanie Pincetl, director of the California Center for Sustainable Communities at UCLA, who has studied turf replacement programs but wasn’t involved in the new paper. “We’re so stuck. We have no conceptual architectural imagination.”

What we need, then, is fewer boring lawns and more creativity.