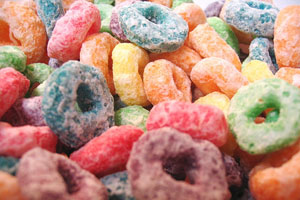 Smart is the new cool thing. There’s a smart car, cities now tout smart growth, and you can buy a smart refrigerator. Now comes another breakthrough: Even your breakfast cereal has gotten smart.

At least that’s what we consumers are being told by a group of major food corporations that are hoping to cash-in on the growing public concern about nutrition. Your concern is their concern, they say, so these eager-to-serve marketers have launched a snappy food labeling campaign to guide your nutritional choices. They’ve designated hundreds of their food products as being not just tasty, zesty and zowie—but also good for you.

You’ll know which ones to reach for on the supermarket shelf because they’ll be labeled with a snappy green checkmark on the front of their packages, along with the phrase, “Smart Choices.”

The industry says that this seal of approval is all about helping today’s busy shoppers save time. No need to read those tedious lists of ingredients on the backs of food boxes, bottles, jars and cans, for the simple green checkmark is your one-glance reassurance that you’re making the smart nutritional choice for your family.

You know, smart choices like Froot Loops, Fudgesicle bars and Frosted Flakes. Yes, all of these sugar-saturated concoctions and many more have received the industry’s good-for-you checkmark.

Well, snaps one of the designers of the labeling scheme, it’s not a matter of selecting foods that are the best for you, but of helping consumers choose products that are better than those that would be the nutritional worst. For example, she says: “You’re rushing around, you’re trying to think about healthy eating for your kids, and you have a choice between a doughnut and a cereal. So Froot Loops is a better choice.”

Uh … no, ma’am. Not necessarily so. A serving of Froot Loops is 41 percent sugar. Good grief—there are plenty of doughnuts with a better nutritional balance than that. And, by the way, the average American supermarket does not limit our breakfast choices to doughnuts or Fruit Loops.

What we have here is yet another corporate PR scam. This supposedly independent nutritional certification program was created and is paid for by such purveyors of unhealthy sugars, fats, salt and chemical additives as Coca-Cola, ConAgra, General Mills, Kellogg’s, Kraft and PepsiCo. Each of them pay fees of up to $100,000 a year to get to use the Smart Choices label, and the fees are based on the total sales of products that bear the label.

This means that the more food items certified by the Smart Choices program, the more money it collects, which gives it an incentive to apply the label liberally. Thus, we get such absurdities as this: “light” mayonnaise, which contains less fat than regular, has been granted the better-for-you check mark; but so has regular mayonnaise!

Still, the industry and its apologists insist that even highly processed foods deserve to get a nutritional star because many of them are fortified with essential vitamins and other nutrients. But, as pointed out by Dr. Michael Jacobson of the Center for Science in the Public Interest, “You could start out with some sawdust, add calcium or Vitamin A and meet the (Smart Choices) criteria.”

Jacobson, who served on the initial panel to develop standards for the Smart Choices program, resigned last year noting “(the panel’s) main decisions are determined largely by industry members.”

Among the decisions that troubled him was one that allows the Smart Choices label to be applied, as Jacobson wrote, to foods “containing caffeine, food dyes, the preservative BHA, artificial sweeteners (particularly saccharin, aspartame and acesulfume-K) and other additives that are suspected of causing or have been shown to cause adverse reproductive, behavioral, or gastrointestinal effects or cancer.

Sanctioning these foods is not smart, it’s stupid. And deceptive.