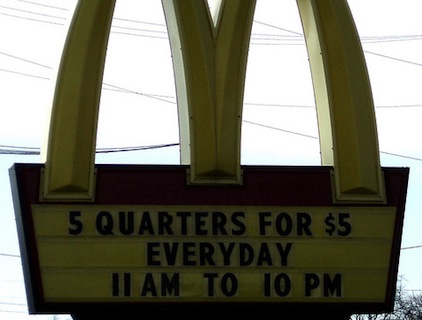 Remember when gas was a dollar a gallon? The era of the fast-food “dollar menu” may be going the same way.

Cheap food has been with us for a while. After World War II, global grain prices fell steadily for decades. US and European farms scaled up, resorted to synthetic and mined fertilizers and pesticides, invested in massive planting and harvesting machines as well as novel seed varieties. All of this pushed crop yields into the stratosphere—and crop prices into the dirt. The era of cheap food was upon us, giving rise to things like corn-sweetened Big Gulps and the dumping of boatloads of US corn on foreign markets. But now things are changing fast.

The rapid growth in farm output that defined the late 20th century has slowed to the point that it is failing to keep up with the demand for food, driven by population increases and rising affluence in once-poor countries.

And here’s the formidable Lester Brown, writing in Foreign Policy:

Unfortunately, today’s [crop] price hikes are driven by trends that are both elevating demand and making it more difficult to increase production: among them, a rapidly expanding population, crop-withering temperature increases, and irrigation wells running dry.

Both the Times and the Brown analyses are worth reading. They accurately portray the big-picture situation: The globe is consuming staple crops faster than farmers can churn them out, and climate change, population growth, high energy prices, and increased meat consumption all threaten to make things worse. The Times’ Gillis shatters the stubborn claim that climate change will be good for agriculture, at least in the global north, because all of that excess carbon in the air will make plants grow faster. Turns out that other factors, like extreme weather events and excess heat, will likely more than offset that effect.

Brown is especially good on the “land grab” problem: the trend of cash-rich, land-poor countries like Saudi Arabia buying up prime farm territory in low-income countries, mostly in Africa:

By the end of 2009, hundreds of land acquisition deals had been negotiated, some of them exceeding a million acres. A 2010 World Bank analysis of these “land grabs” reported that a total of nearly 140 million acres were involved—an area that exceeds the cropland devoted to corn and wheat combined in the United States. Such acquisitions also typically involve water rights, meaning that land grabs potentially affect all downstream countries as well. Any water extracted from the upper Nile River basin to irrigate crops in Ethiopia or Sudan, for instance, will now not reach Egypt, upending the delicate water politics of the Nile by adding new countries with which Egypt must negotiate.

In other words, rich countries are essentially colonizing farmland in places where millions of people face chronic hunger—often in secret deals with domestic elites that ice out local farmers whose families have occupied the land for generations, Brown reports. He adds a detail I hadn’t heard before: Two-thirds of these land grabs involve crops grown for non-food purposes, mainly biofuels. The industrial world is essentially turning the global south’s prime farmland into another source for car fuel.

For all its analytical power, Brown’s article is scant on solutions. “The time to act is now,” he concludes, “before the food crisis of 2011 becomes the new normal.” But he doesn’t specify what he’d like to see happen. Gillis, meanwhile, fixates on technology—though to his credit, he doesn’t parrot the agrichemical industry’s marketing line that without heavy doses of its products, global famine is inevitable. According to industry dogma, only patent-protected GMO seeds will fit the bill. Yet most of the examples Gillis points to are seeds “improved” by conventional breeding, not genetic modification.

But both analyses neglect a burgeoning consensus among some development specialists and ag experts that the solution to the “global food crisis” doesn’t come from technology at all—at least not the kind that comes in a bag. Just last month, a team of researchers led by the eminent Washington State University soil scientist John P. Reganold published a paper [PDF] in Science arguing that conventional US agriculture research has become too “narrowly focused on productivity and efficiency” at the expense of public health and resilience to the pressures of climate change. Rather than promote techno-fixes, the researchers called for “organic farming, alternative livestock production (e.g., grass-fed), mixed crop and livestock systems, and perennial grains.”

By rejecting agribusiness as usual, Reganold and crew find themselves in good company. Their recommendations dovetail with those Olivier De Schutter, the UN’s special rapporteur on food; the UN Environment Program; and the International Assessment of Agricultural Knowledge, Science, and Technology for Development (IAASTD), a three-year project that engaged 400 scientists from around the globe under the aegis of the World Bank and the UN’s Food and Agriculture Organization.

As such ideas flourish in high-level development circles, they tend to wither in media discussions. From recent reports in The Economist and the public-radio show Marketplace, you would assume experts agree that giant agribusiness firms hold the key to “feeding the world,” and that their only critics are frivolous hippies. That’s just not true. The looming food crisis is all too real; it’s time for a real public debate on how to address it.