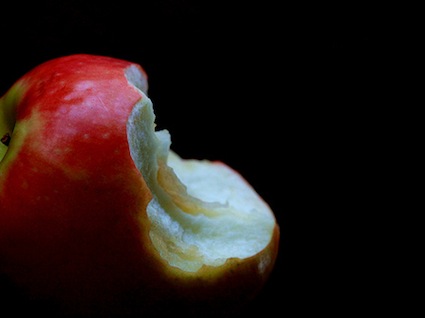 EWG: Don't resist the temptation to eat apples—just buy organic when you can. <a href="http://www.flickr.com/photos/pinksherbet/4424308439/">Pink Sherbert Photography</a>/Flickr

Every year, Environmental Working Group sifts through USDA testing data and figures out which “dirty dozen” fruits and veggies deliver the largest doses and the widest variety of pesticides. This year’s winner, announced Monday: apples. According to EWG, 92 percent of the apples tested by USDA carried two or more pesticide residues. And even as supermarket shelves feature a pretty narrow range of apple varieties—Red Delicious, Granny Smith, etc.—farmers are spraying them with a stunning diversity of poisons. Altogether, USDA picked up no fewer than 56 distinct pesticides on the apples it tested, EWG reports.

Right after EWG shines its bright light on the USDA’s pesticide-residue data, the large-scale fruit-and-veg industry typically shrieks the equivalent of “move along—nothing to see here!” This year is no different. In a statement released early Monday, the produce trade group Alliance for Food and Farming declared that EWG’s list is “misleading to consumers and should not be used when making purchasing decisions about fruits and vegetables.” The Alliance has been hectoring the USDA to emphasize the “safety of products [i.e., poisons] used to bring fresh fruits and vegetables to consumers” when the agency issues its annual residue reports. Indeed, the Alliance for Food and Farming’s campaign against the “Dirty Dozen” list was launched with a $180,000 grant from the USDA (administered through the California Department of Food and Agriculture), EWG reports.

The industry wants to assure us that pesticide residues pose no threat. That’s specious. Last year on Grist, Tom Laskawy pointed to research suggesting that the danger to children posed by ingesting pesticides from fresh produce has probably been underestimated because of seasonal effects. The amount of residue on a single apple might not be enough to cause harm, the researchers found; but during the fall apple season, kids tend to eat more apples, leading to a spike in exposure. Also, the combination of several pesticide residues on a single piece of fruit—a routine situation, EWG shows—may pose more of a risk than is suggested by the tolerance levels for each individual pesticide. Such a “synergistic” or “cocktail” effect has been documented in the case of amphibians—and little tested-for on humans. As Pesticide Action Network puts it:

U.S. EPA sets limits on the maximum amount of each pesticide that can be on each food item, but there’s no limit to the number of different pesticides that can be on your food, or the total amount of contamination. Interacting chemicals can have synergistic effects at very low levels—and little research has been done on the impact of such “Chemical Cocktails” on human health.

The industry also fundamentally distorts EWG’s efforts. “There are some organizations with agendas that do want to scare people away from fresh produce,” one produce industry flack recently told The Washington Post. That’s absurd. EWG prefaces its list like this:

The real purpose of the Dirty Dozen—as well as its companion, the “Clean Fifteen” list of fruits and veggies with the least residues—is to help consumers decide which items are most important to buy organic. This is crucial information for cash- and time-strapped shoppers trying to put healthy food on their families’ dinner table.

My only concern about campaigns like EWG’s Dirty Dozen is that they keep the spotlight on consumers and off of another population segment that deserves protection from the produce industry’s pesticide habit: farmworkers. In The Death of Ramon Gonzales (1990), Angus Wright showed that in the wake of Rachel Carson’s landmark 1962 book Silent Spring, pesticide makers had to fundamentally rethink how they formulated their poisons. Silent Spring sparked a backlash against so-called “persistent” pesticides, which build up over time in soil, groundwater, and the bodies of animals. These dangerous chemicals also tended to cling even more than present-day pesticides to fruits and vegetables in the supermarket.

The agrichemical industry’s response—embraced by farm owners, government regulators, and global aid institutions—was to promote pesticides that break down rapidly. But these alternatives, known as “non-persistent” chemicals, are much more dangerous at the time of application. That is to say, they’re much safer for consumers, and much more dangerous for farmworkers. And as Barry Estabrook shows in his masterful new book Tomatoland, workers are still routinely exposed to highly toxic chemicals on U.S. farms, to disastrous effect.

EWG’s effort to distinguish between “dirty” and “clean” produce doesn’t take any of this into account. It considers only factors that might harm consumers; and says nothing about what goes on in the field. But no fruit or vegetable that harms the people who grow our food can be considered “clean,” even if it poses no danger to the people who eat it.

So, bottom line: Eat your fruits and veggies; buy organic when you can; if you have to prioritize, EWG’s Dirty Dozen and Clean Fifteen lists are the best guides we have; and don’t forget the farmworkers. Check in with Pesticide Action Network of North America for the latest on the campaign to ban methyl iodide—a cancer-causing fumigant that will soon be widely used on strawberry and tomato fields. It leaves no residue on produce but severely threatens farmworkers.