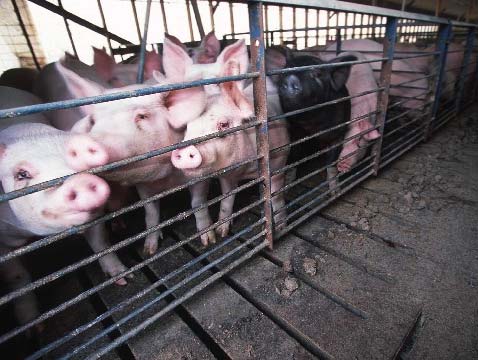 Can you can stuff farm animals together by the thousands and dose them daily with antibiotics, without creating resistant pathogens that affect humans?

Yes, of course you can, insists the meat industry. “Not only is there no scientific study linking antibiotic use in food animals to antibiotic resistance in humans, as the US pork industry has continually pointed out, but there isn’t even adequate data to conduct a study,” the National Pork Producers Council declared in a statement last week.

According to the Pork Producers, a recent report from the Government Accounting Office confirms their view. But as Helena Bottemiller in Food Safety News and Tom Laskway on Grist show, what the GAO is really saying is that regulators like the USDA meat-inspection service have done a lousy job of collecting data on factory-farm antibiotic use. The report states the case bluntly, right in the opening paragraph:

So the GAO is chastising the oversight agencies for failing to collect good data; and the industry is pretending that the lack of good data implies the lack of an underlying problem. It would be funny if real people weren’t dying from what the FDA calls “treatment failure” after being infected with pathogens that antibiotics would normally wipe out.

Meanwhile, the GAO makes clear that factory farm antibiotic abuse does pose a threat to public health. The report states it in plain English:

Unsanitary conditions at slaughter plants and unsafe food handling practices could allow these bacteria to survive on meat products and reach a consumer. Resistant bacteria may also spread to fruits, vegetables, and fish products through soil, well water, and water runoff contaminated by fecal matter from animals harboring these bacteria. If the bacteria are disease-causing, the consumer may develop an infection that is resistant to antibiotics.

While US regulators dither and the meat industry treats their incompetence as vindication, a team of Danish, Australian, and Canadian researchers have brought forth damning evidence on the link between factory farming and resistance. For a study just published in Foodborne Pathogens and Disease, the team isolated strains of antibiotic-resistant E. coli found in humans and compared them with resistant strains found in pigs, poultry, and cattle.

Of course, as I’ve written before, none of this is a secret. All the relevant US regulatory and disease-tracking agencies—USDA, FDA, CDC—have acknowledged that factory farms are brewing up pathogens that antibiotics are increasingly unable to treat.