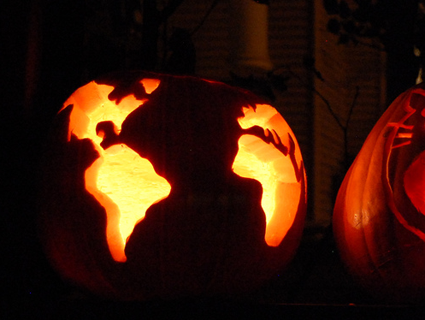 Let me start by confessing that I have become a Halloween curmudgeon. Almost every year I dress up in some sort of costume, plaster on make up, and devour more than my fair share of a candy bar variety pack. There isn’t a holiday that tempts me as much to buy, eat, and wear as many things I don’t need as I do on Halloween. So what better time to consider where those Halloween goodies came from and who made them? They do, after all, make up a $6.2 billion industry. And even in the midst of a troubling economy, Americans will spend an average of $72.31 on Halloween this year, the highest amount recorded in the last nine years, according to the National Retail Federation. Herewith, the full scoop on pumpkins, candy, costumes, make-up, and fake bling:

Pumpkins: You’ve likely already touched, seen, or carved a pumpkin of your own. For the most part, these probably were grown on a pumpkin patch not far from your home or within your state. But if you’re also planning on eating a pumpkin, in a pie or other such baked form, you’re probably buying it canned. The United States produced no less than 1.1 billion pounds of pumpkin in 2010, the lion share of which is sealed in cans and shipped off to grocery aisles. Most canned pumpkins come from central Illinois, around the town of Morton, the self-proclaimed Pumpkin Capital of the World. It is also where Nestle, owner of the pumpkin subsidiary Libby’s, operates a pumpkin processing plant, mostly staffed with migrant laborers traveling up from Mexico.

Although there are few labor rights violations reported on pumpkin patches or at the processing plants, Miguel Keberlein, an attorney with the Chicago-based Illinois Migrant Legal Assistance Project, explains that the fact that migrant labor is used at all raises a flag. “That itself tells you that it’s not fantastic work,” he says.

Pumpkin cultivation does have some harmful impact on environment. The watchdog group What’s On My Food?, which aggregates Department of Agriculture data to monitor pesticide use, lists endosulfan sulfate as a main chemical found on winter squash, which includes pumpkins. Endosulfan sulfates have been known to have toxic and sometimes fatal effects on birds, freshwater fish, insects, and snakes.

If you are willing to shell out some extra cash, you could buy organic pumpkins at a nearby natural foods store or farmers market. Daring gardeners out there might try growing one on their own turf.

In the Ivory Coast and Ghana, a total of 532,030 children worked in cocoa farms or cocoa processing, with some 113,000 reporting that they were working against their will.

Candy: When it comes to chocolate, there’s much bad news that we already know. The buckets full of Reese’s cups and Hershey’s Kisses we’ll pass out to trick-or-treaters this week is largely sourced from West Africa. (Some 70 percent of the world’s cocoa comes from that region.) Earlier this year, Tulane University published a report (commissioned by the Department of Labor) detailing child labor on cocoa farms in the Ivory Coast and Ghana, finding that a total of 532,030 children worked in cocoa farms or cocoa processing in the two countries, with some 113,000 reporting that they were working against their will. In the last year, major candy companies, including Nestlé, Mars, and Kraft, have pledged to purchase certified fair-trade cocoa, according to a September 2011 report by Global Exchange, Green America, and the International Labor Rights Forum. Hershey’s has lagged behind in commitments compared with its competitors. Progress has been slow, though, since these companies had already made similar pledges to reduce child labor back in 2001.

You don’t have to look too hard to find ethical sweets. GOOD has a bunch of organic and fair-trade recommendations, from chocolates to lollipops. And if you’re a die-hard Hershey’s fan, good luck with that. Nestlé does sell fair-trade Kit-Kat bars—but only in Europe.

Costumes: Those of you buying costumes or props this year will visit one of 16,450 stores across the United States to do so. Many will likely take home a costume made by Rubie’s Costume Company, the largest such manufacturer and distributor in the world. Rubie’s, which licenses brands from Mattel and Warner Brothers to create popular costumes such as Barbie and Batman, carries a dubious labor record. Back in 2005, some 60 of the factory workers at its plant in Tepeji del Río, Mexico, went on strike to contest alleged workplace child labor law violations, unsanitary conditions, no drinking water, and even forced pregnancy testing. Despite attempts to form an independent union and taking complaints to international trade officials, in the end Rubie’s didn’t budge, and most of the workers on strike settled on a severance. The Department of Labor’s investigation into the matter, published a year later, found that from 1998 to 2005 the Mexican government had not made periodic inspections at the Rubie’s factory as mandated by federal labor laws.

Makeup and jewelry: Before you reach for that zombie makeup kit or pirate’s booty, you might first want to take a look at some recent test results. Last week the Center for Environmental Health found unsafe levels of lead and cadmium in Rubie’s-made costume jewelry. In 2009, the Campaign for Safe Cosmetics independently tested 10 different brands of Halloween face paint, and in all 10 found traces of lead, a substance health experts deem unsafe at any level. As yet, companies are not required by law to include lead or other heavy metal content in its labeling, and not much seems to have changed. A May 2011 Environmental Defence Canada report found lead in most of the 49 cosmetics products it tested, including those made by L’Oréal, Maybelline, Sephora, MAC, and Clinique.

All of the above considered, you might improvise a costume out of your wardrobe, make a robot suit or crocodile mask out of cardboard and foil for your kids, or try out one of these quick-and-easy options at home. You could even organize your own Halloween costume swap next year. It could have an impact on something more profound than your wallet.