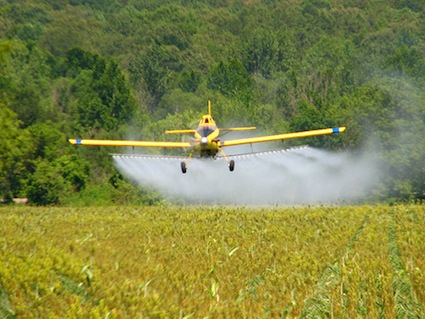 Ecologists call it the “pesticide treadmill”: pests like weeds and bugs evolve to resist the poisons designed to destroy them, forcing farmers to apply ever-higher doses or resort to novel poisons.

But Monsanto’s empire of Roundup Ready crops—designed to resist lashings of its own herbicide, Roundup—appears on the verge of sending the pesticide treadmill into reverse. As Roundup loses effectiveness, swamped by a galloping plague of resistant superweeds, farmers have already played the card of dramatically boosting Roundup application rates.

Now they’re being urged to resort to an herbicide called 2,4-D that first hit farm fields in 1948, and that made up half of the formula for Agent Orange, the infamous defoliant applied to disastrous effect in the Vietnam War. Reports Southeast Farm Press:

2,4-D is coming back. What many might consider a “dinosaur” may be the best solution for growers fighting weed resistance today, said Dean Riechers, University of Illinois associate professor of weed physiology.

To be fair, 2, 4-D made up the less toxic half of the Agent Orange formula, according to this Beyond Pesticides report (PDF) on it. The other half, known as 2,4,5-T, carried most of the dioxin contamination that made Agent Orange such a nightmare for everyone exposed to it in Vietnam.

But 2,4-D isn’t completely off the hook for its role in Agent Orange. Beyond Pesticides reports that “several forms of dioxin have also been found in 2,4-D,” citing both EPA and State of Washington studies. And 2,4-D has quite a dossier of destruction in its own right. Beyond Pesticides points to  both epidemiological and lab-based evidence linking it non-Hodgkin’s lymphoma and other cancers. It’s also an endocrine disruptor, Beyond Pesticides reports, meaning it can “interfere with the body’s hormone messaging system and can alter many essential processes.” It can also act as a mutagen, or a  “substance that induces genetic mutations.” Here’s Beyond Pesticides:

Workers who apply 2,4-D had a higher number of white blood cells with multiple nuclei than people who were not exposed. In rabbits, 2,4-D exposure resulted in unusual numbers of chromosomes in brain cells. Genetic problems like these can have further consequences in terms of cancer and reproductive problems.

So why is this nasty chemical, long ignored by farmers, being called back into the arsenal of industrial agriculture? According to Southeast Farm Press, the 2,4-D revival reflects the fact that agrichemical industry has stopped even trying to develop new, less toxic herbicides to replace Roundup. The publication quotes Dean Riechers, a University of Illinois weed physiologist who has been pushing 2,4-D as the best Roundup alternative, thusly:

Ideally, chemical companies would come up with a new herbicide to fight these resistant weeds. But new herbicide development is expensive and time-consuming. Riechers said he does not know of any new compounds on the horizon.

“If we don’t find completely novel and new herbicides, our next best bet is to mix glyphosate [Roundup] and another herbicide with relatively minor resistance problems,” Riechers said.

Here’s my analysis. The ag-related “chemical companies” are all now in the business of peddling genetically modified seeds. Rather than spending R&D cash coming up with less-toxic herbicides, they’re spending it on novel seeds engineered to be resistant to their old herbicides, toxicity be damned, in hopes of coming up with a blockbuster product worth billions, like Monsanto’s now-failing Roundup Ready corn, soy, and cotton seeds.

Indeed, Dow AgroSciences, which is the chief US maker of 2, 4-D, is hard at work on new 2, 4-D-resistant seeds, which it hopes to roll out over the next few years. These seeds would allow farmers to spray as much of the the highly toxic stuff as they want without harming their crops. Wouldn’t that just lead to the next round of superweeds? Well, yes. Riechers, the University of Illinois scientist, admitted as much to Southeast Farm Press:

We have resistance to almost all herbicide families now. Tank-mixing auxin herbicides [2, 4-D] with glyphosate [Roundup] may work for the short-term, but I expect that auxin resistance will likely increase over time. Nature always finds a way.

Meanwhile, Monsanto is busily trying to revive yet another nasty old herbicide, called dicamba, rated by Pesticide Action Network as a “bad actor” because it acts as a “developmental or reproductive toxin.” Monsanto claims to have conjured up crops resistant to both Roundup and dicamba, and currently has an application into the USDA for approval of them.

As these agrichemial giants shift the pesticide treadmill into reverse, trotting out their old Rachel Carson-era poisons as the next big thing, we should reflect that these are the companies that are often hailed as the true and only solution to “feeding the world” going forward.