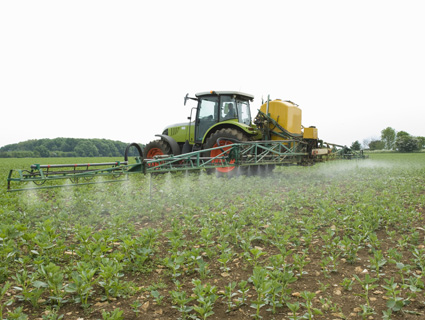 Atrazine is the second most widely used pesticide on US farms. According to its maker, the Swiss agrichemical giant Syngenta, US sales of it are booming. Does it cause cancer?

The EPA, which regulates pesticide use, has been operating under the assumption that the chemical is “not likely to be a human carcinogen.” But in 2009, the agency launched what it called a “comprehensive new evaluation of the pesticide atrazine to determine its effects on humans.” As part of the process, it charged a panel made up of independent scientists and public health experts to “evaluate the pesticide’s potential cancer and non-cancer effects.”

Last week, the EPA released the minutes of the panel’s final meeting, which took place July 26-28. Its conclusions were stark. The panel criticized the EPA for lumping all forms of cancer together in its atrazine assessment, noting that “it would be useful and appropriate to make conclusions for individual cancers as opposed to making a blanket determination for cancer in general.” It then gave a list of cancers for which there is “suggestive evidence of carcinogenic potential”: ovarian cancer, non-Hodgkin’s lymphoma, hairy-cell leukemia, and thyroid cancer. For other cancers—prostate cancer, breast cancer, liver cancer, esophageal cancers, and childhood cancers—the panel found that “there is inadequate evidence” to determine whether or not atrazine is a cause.

The Panel recommended adjusting the conclusion that atrazine is unlikely to be carcinogenic to humans to “inadequate information to assess carcinogenic potential.”

To put the panel’s conclusion in plain English, the agency had been understating the cancer risk posed by atrazine. That can bring no comfort to hundreds of thousands of people who live in the agriculture-intensive regions of the Midwest and South. That’s because, as this 2010 analysis of US Geological Survey data by the Natural Resources Defense Council shows, surface water and drinking water there are “pervasively contaminated with atrazine.” What’s worse, levels often spike during times of year when farmers apply the chemical, exposing people to atrazine levels at or above the EPA’s accepted limit of 3 parts per billion.

When EPA announced its review of atrazine in 2009, its press release described the project like this:

The U.S. Environmental Protection Agency is launching this year a comprehensive new evaluation of the pesticide atrazine to determine its effects on humans. At the end of this process, the agency will decide whether to revise its current risk assessment of the pesticide and whether new restrictions are necessary to better protect public health.

Now that the panel has completed its final meeting, what’s next for the EPA’s review of atrazine? Will the agency ban the chemical, which in addition to its carcinogenic potential is also strongly suspected of being an endocrine disruptor? Or will it declare a moratorium on its use, pending more research?

Apparently, the agency plans to do nothing at all, at least for the time being. I contacted the EPA press office to find out the next step in the process. A spokesperson would tell me only that the agency would not begin to consider changing atrazine’s actual regulatory status until 2013—and could give me no timeline on how long that process would take. In the mean time, farmers will continue dumping 76 million pounds of it onto farm land annually, to the delight of Syngenta shareholders.