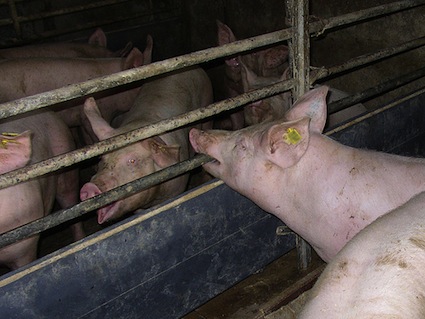 At Maverick Farms, we keep a flock of chickens for eggs. It seems axiomatic to me that the happier and healthier the birds are, the better the eggs will be. So if a salesperson showed up pitching a product that would, say, boost egg production by 5 percent, while making our birds sick, but just healthy enough to keep laying, I’d send him packing. Who wants to eat eggs from a sick chicken? And why would I intentionally harm the animals who provide my eggs?

The US meat industry has different ideas. Its main goals are to maximize production while minimizing costs. Animal health matters only to the extent that the animals need to be well enough to scuttle down the slaughter line (or produce eggs, in the case of hens). Thus the industry routinely feeds livestock stuff that makes them sick.

Reporting for the newly hatched Food and Environment Reporting Network, the excellent food-safety reporter Helena Bottemiller exposes one major example: the widespread use on factory-scale hog farms of ractopamine, a drug that boosts meat production but makes hogs miserable. The drug—fed to 60 to 80 percent of pigs, Bottemiller reports—”mimics stress hormones, making the heart beat faster and relaxing blood vessels.” Its effects are pretty dire:

Since it was introduced [13 years ago], ractopamine had sickened or killed more than 218,000 pigs as of March 2011, more than any other animal drug on the market, a review of FDA veterinary records shows. Pigs suffered from hyperactivity, trembling, broken limbs, inability to walk and death, according to FDA reports released under a Freedom of Information Act request.

Now, 218,000 pigs over 13 years is a rounding error for the pork industry, which slaughters upwards of 110 million hogs every year. The industry has clearly calculated that torturing pigs with pharmaceuticals is worth a few losses, so long as overall meat production gets a boost.

Of course, some of that ractopamine makes it into the pork on the supermarket meat aisles, Bottemiller reports. “While the Department of Agriculture has found traces of ractopamine in American beef and pork,” she writes, “they have not exceeded levels the FDA has determined are safe.” Other countries don’t see it that way, and the bulk of Bottemiller’s piece is about the refusal of the European Union and China—the globe’s two biggest pork markets—to accept meat from ractopamine-treated animals.

But this is hardly the only example of livestock being fed something known to make them sick. Since corn prices skyrocketed a few years ago, industrially-raised pigs have been finding an increasing amount of a cheaper corn byproduct called distillers grains—a leftover from the corn-ethanol process—in their rations. Distillers grains, it turns out, are full of toxins that attack pigs’ hearts, giving rise to a condition called Mulberry Heart Disease. Again, pigs aren’t affected quite enough to offset the industry’s gains from cheaper feed, so the practice goes on.

And as Michael Pollan showed in his classic 2002 article “Power Steer” (later folded into The Omnivore’s Dilemma), the corn-rich diet cows get on feedlots in the months before slaughter literally destroys their livers. Pollan reports that corn raises the pH level of cows’ rumens, making them susceptible to a condition called acidosis. The condition “can kill the animal but usually just makes it sick,” Pollan adds. He goes on:

Acidotic animals go off their feed, pant and salivate excessively, paw at their bellies and eat dirt. The condition can lead to diarrhea, ulcers, bloat, liver disease and a general weakening of the immune system that leaves the animal vulnerable to everything from pneumonia to feedlot polio.

Cows rarely live on feedlot diets for more than six months, which might be about as much as their digestive systems can tolerate. “I don’t know how long you could feed this ration before you’d see problems,” [feedlot veterinarian Mel] Metzen said; another vet said that a sustained feedlot diet would eventually “blow out their livers” and kill them. As the acids eat away at the rumen wall, bacteria enter the bloodstream and collect in the liver. More than 13 percent of feedlot cattle are found at slaughter to have abscessed livers. [Emphasis added.]

Again, the beef industry reckons that ruining cows’ health while they’re on the feedlot doesn’t matter, as long as corn fattens cows—as it does—and enough cows can be kept alive on it to reach slaughter weight. (The only way to ensure that, Pollan claims, is to feed them daily doses of antibiotics—but that’s a story for another post.) For the industry, the arrangement means profit. For us, it means that we’re routinely eating beef from sick, miserable animals. I read Pollan’s piece when it came out ten years ago, and have been avoiding feedlot beef ever since.