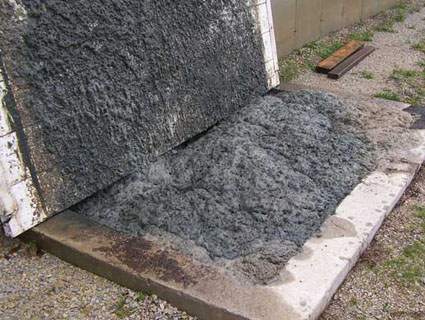 A specter haunts the Midwest’s factory-scale hog farms: the specter of explosive “manure foam.” From the Minnesota Daily:

A few years ago, hog farmers throughout the Midwest noticed foam building on top of their manure pits. Soon after, barns began exploding, killing thousands of hogs while farmers lost millions of dollars.

And you thought Santorum was gross.

But seriously, what gives? First, it helps to have an idea of how manure is handled at industrial hog facilities. In his classic 2005 Rolling Stone exposé of the industrial pork giant Smithfield, Jeff Tietz provided a vivid description:

The floors are slatted to allow excrement to fall into a catchment pit under the pens, but many things besides excrement can wind up in the pits: afterbirths, piglets accidentally crushed by their mothers, old batteries, broken bottles of insecticide, antibiotic syringes, stillborn pigs—anything small enough to fit through the foot-wide pipes that drain the pits. The pipes remain closed until enough sewage accumulates in the pits to create good expulsion pressure; then the pipes are opened and everything bursts out into a large holding pond.

The manure itself is pretty nasty, too. Pigs on factory farms are given daily doses of antibiotics and growth-promoting additives like ractopamine, much of which ends up in their waste. So what you get in those cesspools, the ones now exploding in the Midwest, is kind of a stew of bacteria, antibacterial agents, and novel antibiotic-resistant bacteria strains, all mixed with the random detritus described by Tietz.

It should be noted that manure foam explosions are relatively rare. The Midwest houses thousands of factory-scale hog facilities, and only six of them, reports Minnesota Daily, have been set aflame by the mysterious foam since it begin appearing in 2009.

The foam itself, though, has become alarmingly common. The trade journal AgriNews reports that a University of Minnesota research team is studying the phenomenon, and their survey of 200 pork producers “found that approximately 25 percent of farms had foaming. At those farms, foaming occurred in 25 percent of rooms.”

And it has turned industrial hog farms into veritable tinder boxes. AgriNews describes the pathway from foam outbreak to flaming hog house:

A layer of surface foam that forms on some manure pits becomes toxic as it acts like a sponge to capture gases, particularly methane. Agitation can break the foam and release the gas. Just a small amount of methane trapped in the foam has the potential to cause a flash fire or explosion if it comes in contact with a spark from a motor or pilot light.

So what is this horrifying stuff—which be as much as four feet thick—and why did it begin appearing? The Minnesota research team is focusing on changes in the microbial content of pig shit as the cause. Minnesota Daily reports that the researchers hypothesize that a “new set of [bacteria] species” has developed in manure pits in the last few years. One possible catalyst: The practice of feeding pigs distillers grains, the spent mash left over from turning corn into ethanol. Distillers grains came roaring into feed rations in the mid-2000s as corn prices surged, pushed up by the federal government’s escalating corn-ethanol mandates.

Trouble is, turning corn into ethanol is an industrial process, and the leftover mush tends to carry industrial residues, including antibiotics (which are used liberally to control fermentation in the ethanol process). Distillers grains are also prone to developing toxic molds, which have been shown to harm pigs. It would certainly not be surprising if dumping huge amounts of the stuff into pig feed rations caused some grotesque and explosive change in the bacteria in pig manure.

Yet the Minnesota team adds that the distillers grains link, while suggestive, isn’t definitive. Most gigantic hog operations tend to operate several “barns,” each containing as many as 2,000 animals. Even within operations that use lots of distillers grains, some barns develop foam and others don’t. The Minnesota Daily quotes one of the researchers, who employs the word “foam” as a verb, to chilling effect: “It’s very frustrating when you have two identical buildings sitting next to each other with same management, genetics, diets, etc. One foams, and the other does not.”

If the team remains flummoxed about the precise causes of the foam, they have settled on a short-term solution, reports AgriNews: Treating hog cesspools with a pharmaceutical chemical called Rumensin, an antibiotic fed to cows to increase meat production and cut down the methane they emit.

But Rumensin—brought to us by the same animal-pharma branch of Eli Lilly that brought us the pig-stressing growth promoter ractopamine—is pretty vile stuff. Its active ingredient, monensin, has a listing with the US National Library of Medicine’s Toxicology Date Network that reads like a rap sheet (scroll down to the animal-toxicity part). The Minnesota researchers themselves are concerned about the unintended consequences of using it, reports AgriNews.

Resorting to a toxic substance to “solve” a literally explosive problem caused by concentrating large animals together by the thousands: I can’t think of a more apt example of how industrial agriculture functions.