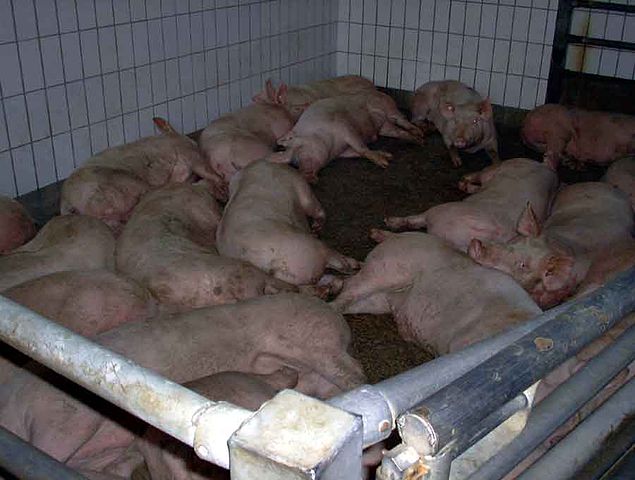 Now a new paper in mBio describes how a particularly nasty strain of MRSA—the CC398 strain found primarily in pigs but also in cattle and poultry—likely did that.

Sequencing the genomes of 88 closely-related strains of S. aureus, the researchers found the CC398 strain likely originated as a harmless bacterium living in humans, which acquired antibiotic resistance only after it migrated into livestock. From there it migrated back to humans, where it now causes skin infections and sepsis, mostly in farm workers.

So far the strain has not evolved the ability to transmit between humans.

The CC398 strain of MRSA, which appeared in 2003, is now commonplace in US livestock.

Modern food animal production is characterized by densely concentrated animals and routine antibiotic use, which may facilitate the emergence of novel antibiotic-resistant zoonotic pathogens. Our findings strongly support the idea that livestock-associated MRSA CC398 originated as MSSA in humans. The jump of CC398 from humans to livestock was accompanied by the loss of phage-carried human virulence genes, which likely attenuated its zoonotic potential, but it was also accompanied by the acquisition of tetracycline and methicillin resistance. Our findings exemplify a bidirectional zoonotic exchange and underscore the potential public health risks of widespread antibiotic use in food animal production.

Last month the FDA announced new restrictions on antibiotics in livestock. But New Scientists reports these rules cover only 0.2 percent of antibiotics used on farms in the US.