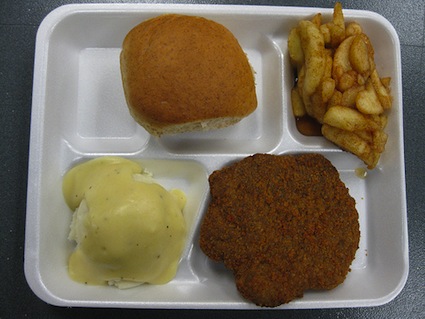 Responding to a media storm (The Daily, CBS, ABC, me), the USDA has relented on “pink slime,” the ammonia-treated hamburger filler that the agency has been ushering into school-cafeteria burgers. “USDA will provide schools with a choice to order product either with or without Lean Finely Textured Beef,” the agency declared in a Thursday press release, using its preferred term for the product. .

So your kid’s school cafeteria can now opt out of the stuff starting now, right? Not so fast.

An excellent post by Nancy Huehnergarth of the New York State Healthy Eating and Physical Activity Alliance (NYSHEPA) blog raises some key questions about the USDA’s move. First of all, as Huehnergarth points out, the USDA’s announcement only applies to the food commodities the USDA itself buys for the National School Lunch Program, which amounts to about 20 percent of the ingredients that end up on kids’ plates.

The rest is sourced at the school-district level, and Ann Cooper, a veteran school lunch reform advocate and director of food services for the Boulder Valley School District in Colorado, told Huehnergarth that it’s doubtful that all schools that want to will be able to get hold of pink slime-free meat.

I talked to Cooper Friday morning to get her perspective. The USDA’s announcement is “smoke and mirrors,” Cooper told me. According to Cooper, most school districts have already pre-bought the entire school year’s food from vendors on contract—and it remains unclear whether district’s who have orders in for meat containing pink slime can change those orders.

And here’s the rub: pink slime’s maker, Beef Products International, has been so successful in getting its product into the industrial ground beef chain that there’s no easy way of getting it out. The company claimed several years ago that pink slime is mixed into 70 percent of the ground beef consumed in the country. That number has likely dropped since McDonalds and other fast food chains have stopped using it, but it remains deeply embedded in the production chain that creates cheap ground beef for supermarkets, schools, and other institutions.

Cooper told me that her district asked one of its suppliers for taco meat sans pink slime, and “they said, ‘we’re looking,'” Cooper told me. “If you can afford premium products like ground chuck, it’s not a problem,” Cooper explained. “But of you’re buying bulk commodity ground beef, like most school districts, it’s going to be really hard, and not always possible.”

Cooper added that opting out of pink slime may evolve into a luxury that only well-to-do school districts can afford, while districts in low-income areas may be stuck with it.

And even districts that can afford pure beef may still have trouble getting it processed without the controversial additive. Cooper explained that few districts have the staffing budgets to turn, say, bulk ground chuck into hamburger patties. To do that, they contract the patty-making out to processors. But they typically get no guarantee that the specific block of ground beef they send in will emerge as the patties they get back. The processors are typically free to mix meat inputs freely, which is much cheaper for them than custom-processing. So a districts buy of pure ground chuck could come back as patties with pink slime mixed in.

Speaking on background, a USDA spokesperson confirmed that the agency’s announcement applies only to beef procured directly by the agency. All of the rest is a matter decided between the individual districts and their private suppliers. So ensuring that your kid’s school lunch is slime-free is going to be much more complicated that the USDA’s press release made it sound.