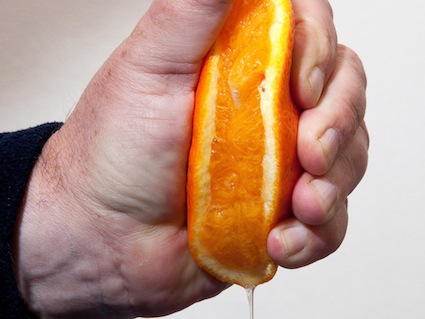 When I think of southern Italy, a kind of mental postcard comes to mind: a table laden with seafood, pasta, and wine, with Homer’s “wine-dark sea” sparkling in the sun-drenched background.

The reality, of course, is much more complicated. The food and sights can be glorious, but amid the region’s base of small farms there exist industrialized, plantation-scale operations. And scale aside, working conditions on the region’s farms are hardly idyllic. Last year, the UK-based Ecologist published a blistering exposé of working conditions in the region’s tomato fields, which produce for the nation’s vast canned-tomato export industry. Workers, mainly migrants from Africa, live in slave-like conditions, with meager pay and awful housing. As is too often the case in the United States, people who spend their time harvesting food live in dire poverty, often having to rely on charity for enough to eat.

Now the Ecologist is back, this time with a report on conditions in southern Italy’s orange groves, which produce fruit to be juiced for the processed food industry, including Coca-Cola and its Fanta soft drink. It’s not clear whether any of the Italian juice ends up in Fanta sold in the US. “The majority of the juice we procure from this area is used in products for our Italian market,” the company wrote in a statement to the Ecologist. Honestly, I’m surprised there’s any real juice in Fanta at all.

For the article, the Ecologist reporters visited a variety of work camps and talk to numerous workers, in the process sketching a hellish picture.

They typically earn 25 euros [about $33] for a day’s work in the Calabrian orange groves. They are often recruited by gangmasters acting on behalf of farm owners cashing in on the ready supply of cheap labour. The gangmasters, both Africans and Italians, can charge workers for transport to and from the orange farms—typically between 2.5 to 5 Euros—and sometimes make other deductions from wages paid by farmers. Many of the migrants in Rosarno and the surrounding countryside live in appalling conditions, in run down buildings or in makeshift slums on the edge of town. There’s no electricity or running water. In many cases there’s no functioning roof.

The Ecologist reporters argue persuasively that the root of the problem lies largely in the power of big juice buyers like Coca-Cola to dictate price, squeezing plantation owners who then squeeze workers. One farmer tells the Ecologist that market price for industrial juicing orange has fallen under the cost of production,  putting farmers under pressure to slash costs, including wages. “I get 7 cents per kilo [about 2 pounds] for industrial oranges [used for concentrate] but need 8 cents per kilo to pay workers, so there is a paradox,” the farmer says. “At the end of the chain is a clash with poor people.” Think about that: 7 euro cents is about 9 US cents, for 2.2 pounds of oranges. Italy’s national farmers union is pushing for a price increase from the big buyers, arguing that 15 euro cents (about 20 US cents) would be fair.

Tragically, the people who work in southern Italy’s orange groves and tomato fields tend to come from some of the globe’s most economically devastated countries: Ghana, Burkina Faso, and Ivory Coast, The Ecologist reports. This is the very region of Africa dominated by the global chocolate trade. The documentary The Dark Side of Chocolate, which I reviewed here, demonstrates that the wealth generated by growing cocoa in that region accrues mainly to US and European companies, while local labor is ruthlessly abused and immiserated. Workers fleeing such conditions by migrating to Italy’s orange groves find themselves in an all-too-familiar spot.

The only hope I can see for southern Italy’s farm workers lies in Immokalee, Florida, epicenter of US tomato production from December to March. That region’s farm workers, largely economic refugees from Mexico and points south, also labor under low pay and rotten living conditions (as I witnessed myself on a vist there three years ago). But they’ve managed to organize themselves as the Coalition of Immokalee Workers and launch a campaign to force the buyers—in this case, fast-food restaurants and supermarket chains—to pay an extra penny a pound for tomatoes, earmarked to give pickers their first pay raise in decades. (Barry Estabrook’s 2009 Gourmet article, later expanded into the excellent book Tomatoland, provides great background on the situation in Immokalee.)

Supported by crack reporting from The Ecologist, perhaps southern Italy’s farm workers can pull off a similar coup. I hope so.