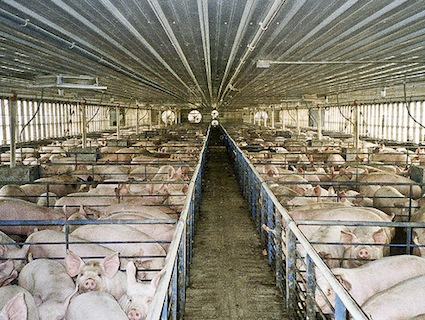 On Dec. 22, the FDA quietly delivered what I called at the time a “Christmas present for factory farms”: It announced it was ending a process it had begun 35 years earlier to determine whether routine antibiotic use on factory-scale kivestock farms posed a public health threat. Instead of pursuing regulation, the agency declared, it would rely on a “voluntary” approach to persuading livestock operations to reduce antibiotic abuse.

Just three months later, the industry’s gift has been unceremoniously snatched back by a federal judge, responding to a lawsuit brought by a coalition of consumer and enviro groups including the Natural Resources Defense Council, the Center for Science in the Public Interest, Food Animal Concerns Trust, Public Citizen, and the Union of Concerned Scientists.

The decision, filed this afternoon, does not compel the FDA to ban growth-promoter (or “feed efficiency”) use of antibiotics. What it does appear to do, though, is require the FDA to follow through on a process that it began in 1977, when the agency was so concerned over the safety of using penicillin and tetracycline drugs in livestock feed that it called hearings to examine withdrawing its approval of using the drugs in animals. Because of pressure, largely from certain Congressmen, those hearings were never held.

Crucially, McKenna adds, the judge put the burden on the pharmaceutical industry to prove that its products are safe. Here’s the money quote from the decision: “If, at the hearing, the drug sponsors fail to show that use of the drugs is safe, the [FDA] Commissioner must issue a withdrawal order,” i.e., ban the drugs.

The industry will have a tough time convincing anyone that current antibiotic practices are safe. As Judge Katz noted in his decision, “Research has shown that the use of antibiotics in livestock leads to the development of antibiotic-resistant bacteria that can be—and has been—transferred from animals to humans through direct contact, environmental exposure, and the consumption and handling of contaminated meat and poultry products.”

The FDA itself made the case for limiting farm antibiotics use in this 2010 report; and last year, it revealed (after years of declining to produce numbers) that 80 percent of antibiotics consumed in the United States go to factory farms.

As yet, there is no timetable on when the court-ordered hearings will take place. And getting the FDA to initiate them in an election year—when both Big Meat and Big Pharma will be pumping money into campaigns—may be tricky. “[T]he fight is far from over: further court proceedings will likely be required to establish a timeline for FDA to act, and FDA could appeal the decision which could delay action for months or even years,” NRDC attorney Avinash Kar wrote in a Friday blog post.

But sooner or later, prodded by Judge Katz, the agency may finally have to wriggle out from under the meat industry’s heel and act on its own decades-old concerns about the rising menace of antibiotic-resistant bacteria.