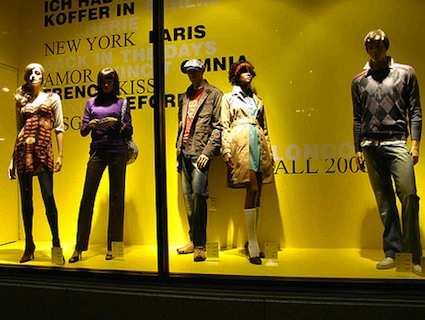 On the Guardian Sustainable Business blog, Pamela Ravasio caused a stir with a post called “Does fashion fuel food shortages?”

Ravasio points out, correctly, that cotton production, like the growing of crops for biofuel, diverts farmland to non-food uses at a time of high global food prices. To make her case, she came up with a statement I’ve seen quoted on several blogs: “the plantations of the three largest cotton growers—the US, China and India—alone account for 50 million acres, 42% of all agricultural land.”

The wording is a little vague, but Ravasio seems to be saying that 42 percent of all global agricultural land is devoted to cotton; or maybe her number relates to farmland in the US China, and India. In either case, it would would be shocking if that proportion of land were essentially growing clothes instead of food. But either way, the 42 percent number is wildly inflated.

I had a surprisingly hard time finding just how much farmland the world devotes to cotton, so I contacted Stephen McDonald, a cotton analyst for the USDA’s Economic Research Service. “Of the major field crops (wheat, feed grains, rice, soybeans, and cotton), cotton accounts for about 4% of global area,” he wrote in an email. Adding in food crops like vegetables and fruit “pushes cotton even lower than 4%,” he added. Nor, he wrote, does cotton acreage approach 42 percent of farmland in either the US, Brazil, or China.

More broadly, though, Ravasio is absolutely right that we need to think much more carefully about the cotton we consume in the form of clothes. According to the UN’s Food & Agriculture Organization (FAO), global cotton production doubled between 1960 and 2001. In that period, some of the most hunger-prone countries on the planet shifted significant farmland to cotton for the global market, hoping to build wealth from a valuable commodity crop. Production of the fluffy fiber in Francophone Africa, for example, rose by a factor of 10 over that period. But as production ramped up, the global price of cotton plunged, the FAO report shows, driven down by abundance as well as competition from synthetic alternatives like polyester.

The price drop meant severe disappointment for cotton producers in poor countries in Africa (while US cotton growers treaded water with a boost from crop subsidies). It also meant a bounty of cheap clothes for rich-nation consumers, who have become shameless clothes horses. Stacy Mitchell, senior researcher for the Institute for Local Self-Reliance, put it like this recently on Grist:

Since 1994, the consumer price of apparel, in real terms, has fallen by 39 percent. “It is now possible to buy clothing, long a high-priced and valuable commodity, by the pound, for prices comparable to cheap agricultural products,” notes Juliet Schor. Cheapness—and the decline in durability that has accompanied it—has triggered an astonishing increase in the amount of clothing we buy. In the mid-1990s, the average American bought 28 items of clothing a year. Today, we buy 59 items. We also throw away an average of 83 pounds of textiles per person, mostly discarded apparel, each year. That’s four times as much as we did in 1980, according to an EPA analysis of municipal waste streams [PDF].

And now, with global food prices hovering near all-time highs, putting millions of peoole in the global south on the verge of hunger, the amount of cropland we’re devoting to generate disposable clothes—even if it’s less than 4 percent, not upwards of 40 percent—does seem obscene.

Moreover, conventionally grown cotton is an environmentally ravenous crop—it has a higher ecological footprint (accounting for carbon emissions, water use, etc) even than polyester, which is literally made of petroleum, according to a study from the Stockholm Environment Institute.

So, no, cotton hasn’t gobbled up 40 percent of farmland; but it is doing plenty of damage, and we need to think more about how we use it.