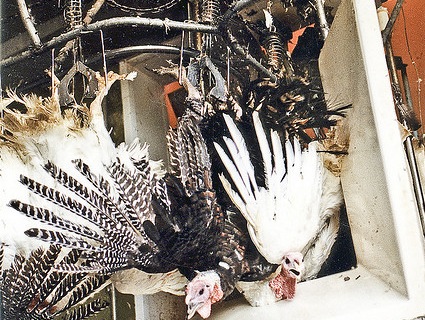 Turkeys headed for the kill at an industrial-scale slaughterhouse. <a href="http://www.flickr.com/photos/farmsanctuary1/2162881999/sizes/m/in/photostream/">Farm Sanctuary</a>/Flickr

Last week, two news items crossed my desk that demonstrate the meat industry’s power and its threat to public health.

The first is the extraordinary, bipartisan political defense of the embattled, ammonia-laced ground-beef filler that has become known as “pink slime.” The second is a proposed plan by the Obama administration to fire USDA inspectors and let the poultry industry inspect its own slaughterhouse lines—while simultaneously speeding up the kill line.

The cross-aisle clamor on behalf of BPI and its burger filler comes even as the company’s customers—fast-food and supermarket chains and industrial-scale beef processors—are abandoning it en masse. The company has had to close three of its four plants in response to plunging demand. In other words, the market has rejected pink slime, and market-fetishizing politicians are screaming bloody murder. When Kansas Gov. Sam Brownback exclaimed at a press conference, “Dude, it’s beef!…It’s good beef,” it was hard not to read a note of desperation in his outburst.

The dismay is remarkable, but hardly mysterious. It’s an election year, and as Helena Bottemiller makes clear on Food Safety News, BPI and its execs have been generous campaign donors. “According to Federal Election Commission data, [BPI CEO Eldon] Roth and his wife have together given more than $380,000 over the years to presidential and congressional campaigns, political action committees (PACs), and to large party organizations, like the Republican National Committee,” Bottemiller reports.

BPI’s political friends have all emphasized that they think pink slime is safe. USDA chief Vilsack summed it up at a press conference he held specifically to defend pink slime: “This product is safe. There’s no question about it. We’ve said that repeatedly and we’ll continue to say it.”

In the name of food safety, meat-industry regulators are rallying around a company whose flagship product does little if anything to advance food safety.

It’s worth remembering that BPI originally rolled out the product it prefers to call “lean, finely textured beef” as a technical fix to the nation’s tainted ground beef problem. (The problem is that the ground beef that ends up in grocery stores and fast-food patties is routinely tainted with pathogens like E. coli and salmonella, often resistant to multiple antibiotics). The idea was that the ammonia in pink slime would not only kill pathogens in the slaughterhouse scraps that formed its raw material, but also in the ground beef into which it was mixed.

As the New Times’ Michael Moss showed in two blockbuster 2009 reports (here and here), pink slime failed miserably as a solution to ground beef’s pathogen problem. Ground beef mixes that included pink slime, Moss showed, have proven quite capable of making people extremely sick. In the name of food safety, elected officials and meat-industry regulators are rallying around a company whose flagship product does little if anything to advance food safety.

Now, on to the new slaughterhouse rules. While Vilsack and his food-safety lieutenant shuck and jive for an ailing meat industry titan, their agency is proposing a radical overhaul to the way poultry slaughterhouses are inspected—one that will significantly benefit the industry while potentially increasing the risk to consumers from antibiotic-resistant bacteria.

Here’s how it works, according to an analysis of the proposal by Food & Water Watch (FWW). In the nation’s industrial-scale poultry slaughterhouses, a USDA inspector currently looks at each bird emerging from the kill line for obvious defects. Any bird that’s obviously flawed gets pulled, but it’s only humanly possible for an inspector to check out 35 birds per minute—one every 1.7 seconds. That has been a limiting factor in the speed at which “kill lines” can operate.

Under the proposed new system, those USDA inspectors would be sent packing, and employees of the slaughterhouse would take over the job. To check up on them, the USDA “samples between 20 to 80 birds per slaughter line during an eight-hour shift to check for defects missed by company employees,” FWW reports. But here’s the catch: The new rules would likely allow the line speed to ramp up to “upwards of 200 birds per minute”—or 3 per second. So the USDA would now be inspecting a tiny fraction of the birds that end up on people’s plates.

The USDA is pitching the new rules as a way to save taxpayer money, cut costs for the industry, and increase food safety. In this risk assessment from November, the agency claims the proposed rules would result in the elimination of 800 inspector positions, saving as much as $95 million over three years. This would also save the poultry industry a fat $256.6 million due to ramped-up line speeds—all while reducing illnesses from tainted chicken products.

But Food & Water Watch’s investigation of the USDA’s longtime pilot program to test the new procedures casts serious doubt on the food safety claim. Using the Freedom of Information Act, FWW obtained inspection documents from slaughterhouses in the pilot program for the first eight months of 2011. The reports relate to the 20 to 80 randomly selected birds the USDA inspectors looked at during each shift to check up on company-hired inspectors. The results, from FWW’s summary, make pink slime look downright appetizing (full report here):

It gets worse. In the period from March to August 2011, 90 percent of the defects found by the USDA inspectors involved “visible fecal contamination that was missed by company employees.” One inspector’s report contained this unsettling anecdote:

I observed a section of intestine wrapped around the rotating paddles in the neck chiller. The intestine was approximately 1 1/2 feet in length, contained fecal material. Additionally, numerous other pieces [of] digestive tract materials, such as chicken crops and esophagus were also observed in the neck chiller…This regulatory noncompliance would potentially allow for the cross contamination of necks by digestive contents material such as ingesta and/or feces.

Ugh. FWW reports that the public has until April 26 to comment on the program, which could be rolled out as soon as October. Meanwhile, the USDA has made clear that it wants to institute the new rules.

What’s grosser than pink slime, grosser even than bipartisan posturing to save pink slime from overwhelming public rejection? An alleged watchdog agency that’s more intent on throwing bones to the meat industry than protecting the public’s health.