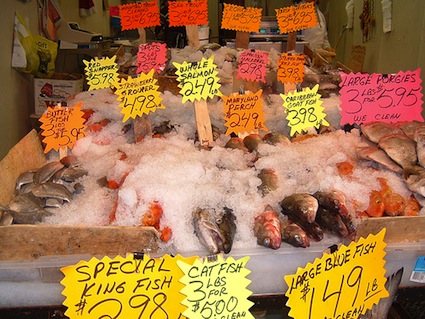 Over on The Daily Beast, the marine biologist Callum Roberts has a good essay (excerpted from his new book) on a topic that doesn’t get nearly enough attention: the declining state of the oceans.

According to Roberts, “with an ever-accelerating tide of human impact, the oceans have changed more in the last 30 years than in all of human history before.” Today, he adds, “in most places, the seas have lost upwards of 75 percent of their megafauna—large animals such as whales, dolphins, sharks, rays, and turtles—as fishing and hunting spread in waves across the face of the planet.”

Roberts touches on the familiar villain of overfishing and gives the standard (and relevant) advice that consumers should strive to “eat low in the food web, so favor smaller fish like anchovies, herring, and sardines over big predators like Chilean sea bass, swordfish, and large tunas (you will be doing yourself a favor, as these predators also concentrate more toxins).”

But he makes an even more important point that I fear often gets lost amid the fishery labels and the “avoid” and “recommended” lists (as important as those things are): The oceans represent contain highly complex ecosystems that are intimately related to their terrestrial counterparts in ways that transcend fishing trends. Overfishing is “only one small piece in a much larger puzzle of interacting impacts,” Roberts writes. To put it in another way, consumer choices about which sea creatures to devour and which to shun, while important, only exert so much influence over the fate of the oceans.

In ecosystem terms, there’s no clean line between “land” and “ocean.” The two are intertwined; foul one and you foul the other. It turns out the human addiction to fossil fuel may be even more devastating to the seas than our appetite for big top-feeding fish like tuna, or our insane habit of hoovering up of “forage” fish like sardines as feed for industrial salmon farms. Roberts connects land-based fossil fuel use to the the ruin of oceanic habitats.

The oceans have absorbed around 30 percent of the carbon dioxide released by human activity since pre-industrial times, mainly from fossil-fuel burning, conversion of forests and swamp to cities and agriculture, and cement production. If carbon-dioxide emissions are not curtailed, ocean acidity is expected to rise 150 percent by 2050, the fastest rate of increase at any time in at least the last 20 million years and probably as long as 65 million years, which takes us back to the age of dinosaurs.

What does the specter of acidification mean for the oceans? Roberts reports that it severely threatens species with carbonate shells—everything from the corals that make habitat-forming reefs to the calcareous plankton that feed deep-sea fish to the oysters and clams we love to eat. As a National Oceanic and Atmospheric Administration report puts it, “When shelled organisms are at risk, the entire [oceanic] food web may also be at risk.”

Roberts also touches on another land-based threat to the oceans, one I’ve fixated on often: the emergence of massive, annual oxygen-depleted dead zones at the deltas of big rivers like the Mississippi, fed by fertilizer runoff from large-scale crop farming and waste from confined-animal feedlot operations.

There are others he doesn’t get to. Meat from large, long-living fish like tuna is riddled with toxic heavy metals because of mercury emissions from land-based coal-burning power plants. Our mercury-laced coal waste seeps into the oceans, gets taken up by phytoplankton, and then bioaccumulates as it moves up the food chain and onto our plates—where it represents a significant neurological risk to developing fetuses and young children.

And the practice of pillaging wild stocks of small forage fish like sardines and anchovies, which I mentioned above, isn’t just about feeding our appetite for cheap farmed salmon or omega-3 fatty acid supplements. It’s also driven in large part by our hunger for cheap pork and chicken. According to a 2011 Oceana report, as much as a third of the entire annual global fish catch represents forage fish snatched away to be converted into fish meal—and nearly half of that fish meal ends up as feed in our land-based factory farms. Forage fish are a key component of the oceanic food web—they convert plankton into ready food for the bigger species that feed on them. We’re removing them from the ocean at unsustainable rates.

All of this is to say that we shape the fate of the oceans in ways that go far beyond whether we choose a “best choice” or an “avoid” species at the fishmonger. At this point, how we choose to live here on terra firma—from our transportation and energy systems to our land-based food habits—will largely determine whether the oceans contain resilient ecosystems that produce glorious food for us, as they have for nearly all of human history, or vulnerable ones prone to collapse.