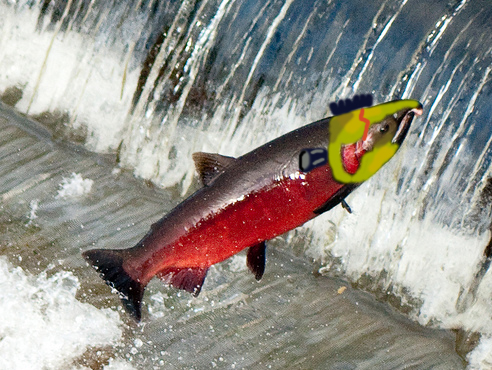 It's alive!Illustration by Kate Sheppard, with photo by <a href="http://www.flickr.com/photos/soggydan/4041050503/sizes/m/in/photostream/">Soggydan</a>/Flickr.

Despite strong lobbying from northwestern senators for a measure that would require more testing of genetically engineered salmon before it’s introduced in the US,  the Senate on Thursday voted it down. The “frankenfish” measure, introduced by Alaskan Republican Lisa Murkowski, failed by a 46-50 vote.

Murkowski put forth the measure as an amendment to the Food and Drug Administration Reauthorization Bill (a measure that would create a user-fee to partially fund FDA’s work).  Her measure would have required that the FDA hold off on approving or rejecting so-called “test tube salmon” until the National Oceanic and Atmospheric Administration has done its own tests on the environmental and economic impacts the salmon might have on fisheries.

The FDA granted preliminary approved for GE salmon back in September 2010, but it remains a contentious issue. If approved, it would be the first GE animal approved for human consumption in the US.

AquaBounty Technologies has been seeking approval for the fish for 15 years. The fish is an Atlantic salmon that has been tweaked to include a growth hormone gene from a Chinook salmon that allows the fish to grow to full size in half the time it takes for normal Atlantic salmon. But that’s probably the least strange thing about them. As the Los Angeles Times described last year, the company’s proposal “calls for the embryos of the fish to be sterilized in Canada before being shipped to Panama, where the males would be exposed to estrogen and sex-reversed.”

Murkowski and other opponents argue that the FDA is not looking at the wider environmental concerns. Agitating against GE salmon is a bipartisan issue in Alaska and the Pacific Northwest. Murkowski’s cosponsors included Democratic Alaskan Sen. Mark Begich, Washington Democrat Maria Cantwell, and Oregon Democrat Jeff Merkley—all from states where the salmon industry is a big player. The fast-growing GE salmon would provide stiff competition with regular salmon.

“At my home, we eat a lot of salmon and I can stand there and I can say ‘This is brain food, this is good for you, it’s loaded with Omega 3 fatty acids – it’s as good as you’re going to get.’ And I can say that with certainty,” said Murkowski in a floor speech on Thursday. “We can’t say that, and we won’t say that with this genetically engineered fish. As a mom, I’m not going to say, ‘Eat this Frankenfish.'”

Supporters of GE salmon argue that the modified fish would help grow the industry in the US, and provide alternatives for declining natural fish stocks. And you could grow the fish in places where it doesn’t live naturally, they argue.

While the measure failed, supporters at the Marine Fish Conservation Network said in an emailed statement that they believe the 46 votes in favor is “indicative of wide-spread concern on behalf of the public” about GE salmon.