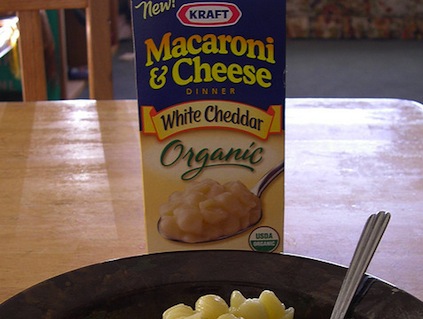 In a much-discussed feature that led the Sunday New York Times business section, Stephanie Strom reignites the long-simmering debate about whether the organic label has been essentially bought out and drained of meaning by gigantic corporations. She paraphrases Michael Potter, founder and CEO of one of the last independently owned organic companies, Eden Foods, like this: “He calls the certified-organic label a fraud and refuses to put it on Eden’s products.”

A fraud, huh? Strom’s story raises many important points that need to be thought through and debated. But it misses a key one: The organic label, for all the untoward influence of Big Food players like dairy giant Dean Foods, still means something. If you buy food labeled organic, you can be reasonably sure it was grown without synthetic pesticides or fertilizers, without genetically modified seeds, without (in the case of dairy, meat, and eggs) antibiotics and other dodgy pharmaceuticals, and on farms required to have a plan for crop rotation and (quoting straight from federal organic code) to “manage plant and animal materials to maintain or improve soil organic matter content.” (For a primer on why I find the latter bit so impressive, go here.) Even the most processed certified-organic item on the supermarket shelf contains raw plant and/or animal material that was raised in ways fundamentally different than nonorganic fare.

In other words, despite 20 years of effort by Big Food to make organic friendly to GMOs, monocrops, dodgy fertilizers like sewage sludge, and more, the organic label remains the single most accessible way for consumers to avoid supporting the worst ecological practices of industrial agriculture. And consumers should know this, and not get the idea that the organic label has been drained of all meaning. (Consumers can also seek out nearby farmers and learn directly about their practices, but not everyone has the time or resources to do that.)

As an example of what the organic label means in practice, consider this 2008 study by researchers from Emory University, the University of Washington, and the Centers for Disease Control on pesticide loads carried in the bodies of children. The researchers looked at group of children fed a conventional diet for a week, then given a 100 percent organic diet for a week, and then returned to a conventional diet for a third week. They found that the level of organophosphate pesticides in the kids’ urine plunged “dramatically” with the introduction of all-organic food, and then spiked anew with the return of conventional food.

Pesticide levels in kids’ urine plunged “dramatically” with the introduction of an all-organic diet, and then spiked anew with the return of conventional food.

Before stalwarts like Eden’s Potter go around publicly discrediting the organic label, they should remember results like that.

However, none of this is to say that the organic label is perfect or beyond legitimate criticism. For one thing, as Julie Guthman demonstrated in her excellent 2004 book Agrarian Dreams, consumers should not harbor the illusion that organic standards contain labor stipulations—and workers on organic farms often face the same dismal conditions as their counterparts on conventional farms (the exception, of course, being pesticide exposure).

And as Strom’s article demonstrates amply, corporate giants have indeed big-footed their way into organic, lured in by two things that have been missing for years in the conventional food industry: robust annual sales growth and the ability to charge higher prices.

When you walk the aisles of food retailers from Whole Foods to Walmart, the dizzying variety of certified-organic processed foods on display are largely the products of a handful of large companies, most of whose profits depend mainly on nonorganic food, as the work of Michigan State University researcher Phil Howard shows. Those Muir Glen tomatoes and Cascadian Farms juices? Brought to you by General Mills. Horizon’s milk products and White Wave soy beverages? They’re from a division within Dean Foods, which dominates conventional dairy. Back to Nature cereals and soy burgers from Boca? Thank Kraft for those. I suppose that if companies feel the need to sell highly processed food, it’s best that they buy organically grown fruits and vegetables.

Cargill, probably the globe’s biggest diversified agribusiness company, even plays a role. “Cargill’s strategic alliances with French Meadow and Hain Celestial are to develop products with nutritionally enhanced organic ingredients such as phytosterols, soy isoflavones, trehalose, inulin, and chondroitin,” Howard informs us. These are what the food industry calls “functional” ingredients—isolated compounds that are marketed as winder nutrients. But as Michael Pollan showed in his book In Defense of Food, there’s no evidence that nutrients that have been isolated from their source and injected into processed fare offer any real benefit.

And as the Cornucopia Institute’s recent investigative report “The Organic Watergate” shows, Big Food is starting to exert powerful influence over USDA organic code. The problem lies in the National Organic Standards Board (NOSB), a independent advisory panel which has statutory authority to decide what nonorganic ingredients can be used in processed foods labeled organic (among other things).

Cornucopia reports that Congress had stipulated that the 15-member board be made up of a cross-section of the organic-food universe: four farmers, two representatives of food processors, three environmentalists, and so on. Instead, the USDA has routinely stuffed the panel with industry reps, often even in slots meant for farmers and environmentalists.

And the corporate-friendly NOSB has indeed made some egregious decisions, most notoriously the one to allow Dean Foods to label its Horizon DHA Omega-3 milk organic, even though it contains a synthetic form of the essential fatty acid DHA. I thundered against this decision in a Grist post last year:

“Fat-Free Milk Plus DHA Omega-3” is a deeply absurd product—the natural fats have been stripped out, replaced by ones conjured up in a lab. In promoting such concoctions, Dean is straying away from a solid notion of organic, and moving into the marketing-driven, hyped-up world of “functional foods”—which is probably where a company of its vast size belongs, anyway. It’s a free country, but I don’t see how Dean should be allowed to use the USDA organic label as a fig leaf for its latest move away from organic principles.

I stand by that statement. And I think Cornucopia is right to get the public fired up about the integrity of organic, and to pressure the USDA to stop stuffing the NOSB with Big Food flacks in disguise. But to jump from there to the conclusion that organic is a fraud, a mere marketing front for big food, is to go too far.