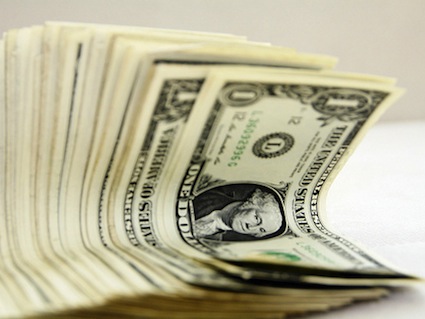 In my Tuesday post about California’s Prop. 37 ballot initiative that would require the labeling of genetically modified food, I wrote about a “gusher” of agribusiness cash entering the state to defeat the proposition, which will be voted on in the November election. In the first comment below the post, frequent commenter Rachael Ludwick writes that “groups in favor of this proposition have so far outspent Big Ag.”

And she’s right—but the gap is closing quickly. Here’s what I mean.

The California Secretary of State’s office compiles and discloses donations to the “yes” and “no” campaigns for each of the state’s ballot propositions. In 2012 through June 30, the “No” side of the fight, led by agribusiness firms and food processors opposed to labeling, had raised about $1,002,000; while the “Yes” side, led by the alternative-health web site Mercola.com and an organic-consumer group’s 501c(4), raised $2,050,408.67.

So it’s really a gusher of organic cash that’s swamping the California labeling fight, right? Well, it’s a little more complicated than that. The first thing to look at is the “total expenditures” and “ending cash” lines of the above-linked reports for each side. By June 30, the pro-labeling campaign had burned through $1,860,644.22 of its hoard, leaving it with $295,149.52 in cash going forward. The anti-labeling side had spent just $674,713.81, leaving it with a cash wad worth $327,286.19 heading into July.

So even though the “yes” forces raised twice as much cash as the “no” brigades by June 30, the latter entered July with the bigger bank account.

I asked Stacy Malkan, a spokeswoman for the California Right to Know group, which is spearheading the pro-labeling campaign, why her side had spent so much more than the anti-labeling opposition so far. She told me that the great bulk of fundraising and spending so far had gone into the drive to get the initiative on the ballot in the first place—the effort to gain 504,760 signatures on a petition required by California’s ballot-initiative rules. (The pro-label petition drive got nearly 1 million signatures.)

The “yes” side, in other words, has been operating at full throttle all year, actively fundraising and burning cash in a scramble for a place on the ballot, while the “no” side is “just getting started” with both fundraising and spending.  Malkan told me.

And preliminary numbers from July suggest that Big Ag and Big Food are in fact on the verge of swamping the ballot fight with their cash. The California Secretary of State’s office adds up spending numbers quarterly, so the most recent summaries we have on spending are the ones linked to above. But the office regularly updates donations between quarterly reports, and by going to this Secretary of State’s office web page for the “yes” side and this page for the “no” side, we can see the individual donations that have come in since June 30.

These are all massive entities with plenty of capacity to give more as the election draws near.

But even the largest of the “yes” companies, United Natural Foods, is small compared to the agrichemical interests funding the “no” side.

On the “yes” side, by far the biggest giver since the start of July has been the Organic Consumers Fund ($150,000), which is the 501C(4) arm of the Organic Consumers Association. The OCA has long been the scrappy gadfly of the organic-food movement, holding out for a non-corporate view of what organic means. Under federal law, 501C(4) entities don’t have to disclose their donors, and OCA director Ronnie Cummins has not returned my email asking for information on donors. Stacy Malkan of California Right to Know told me that the Organic Consumers Fund mainly raises its money from small donors.

Then there’s trade associations. In addition to the above-mentioned Biotechnology Industry Organization, the “no” side has benefited from the largesse of the Grocery Manufacturers Association, which has so far given a total of $375,000 and has declared that defeating Prop. 37 is its “highest priority” in 2012. GMA—whose members range from Big Food companies like Kellogg, Nestle, and Pepsi to Big Agribiz companies like Monsanto and Syngenta—brought in  $33 million in 2010, according to its last publicly available tax form 990. It’s got the corporate resources to pump significant money into beating back the labeling challenge.

In short, while the forces in favor of Prop. 37 have indeed so far raised and spent more cash than the opponents, the situation looks likely to dramatically reverse as the election draws nearer. As Katherine Spiers of Los Angeles’ KCET Radio put it recently, “Expect to see plenty of ‘Yes on 37′ stickers and signs at your local farmers’ market between now and November—and even more ‘No on 37’ commercials on TV.”