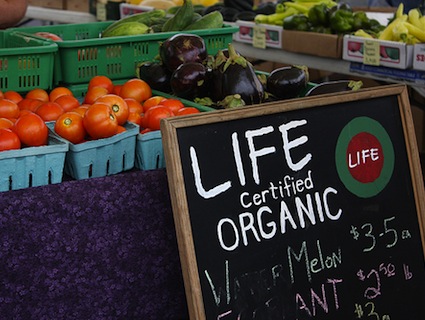 Is organic food little more than a trumped-up marketing scheme, another way for affluent consumers to waste money? A just-released paper by Stanford University researchers—and the reaction to it by the media—suggests as much. (Abstract here; I have a copy of the full study, but can’t upload it for copyright reasons.)

In reality, though, the study in some places makes a strong case for organic—though you’d barely know it from the language the authors use. And in places where it finds organic wanting, key information gets left out. To assess the state of science on organic food and its health benefits, the authors performed what’s known among academics as a “meta-analysis”—they gathered all the research papers they could find on the topic dating back decades, eliminated ones that didn’t meet their criteria for scientific rigor, and summarized the results.

In another post I’ll get to the question of nutritional benefits—the idea, expressed by the Stanford authors, that organic and conventional foods are roughly equivalent in terms of vitamins and other nutrients. What I want to discuss now is the problem of pesticide exposure, and why I think the Stanford researchers are underestimating the risks.

In short, the authors’ findings confirm what the Environmental Working Group, crunching USDA data, has been telling us for years: that organic fruits and vegetables harbor significantly fewer pesticide residues than their chemically grown peers. Summing up the evidence of the studies they looked at, the Stanford researchers find what they call a 30 percent “risk difference” between organic and conventional food—which to the mind not trained in statistics, sounds like organic foods carry 30 percent less risk of exposing you to pesticides. And they immediately undercut that finding by noting that the pesticide traces found in both organic and conventional food tend to be at levels lower than the Environmental Protection Agency’s maximum allowed limits. Takeaway: Conventional produce carries trivially small levels of pesticides, and you might as well save your money and forget organic.

What’s wrong with this comforting picture?

1. Conventional produce is much worse than organic on the pesticide-exposure question than the 30 percent number suggests. That’s what Chuck Benbrook, research professor at Washington State University’ Center for Sustaining Agriculture and Natural Resources, shows in a detailed critique of the study. To get the 30 percent number, the authors used an odd statistical construct they call “risk difference.” By their method, if 5 percent of organic vegetables contain at least one pesticide trace and 35 percent of conventional vegetables contain at least one trace, then the “risk difference” is 30 percent (35 minus 5). But that’s a silly way of thinking about it, because there’s a much greater difference between those numbers than “30 percent” suggests. Crunching the authors’ own raw data, Benbrook finds “an overall 81% lower risk or incidence of one or more pesticide residues in the organic samples compared to the conventional samples.”

But even that doesn’t get to the full extent of the study’s underestimation, since:

2. To arrive at their “risk difference” metric, the authors didn’t distinguish between a single pesticide trace and multiple traces; or between light traces and heavier traces. For their purposes, an organic apple carrying a tiny residue of a relatively innocuous pesticide is equivalent to a conventional apple containing a cocktail of several relatively toxic pesticides. Here’s Benbrook on why that’s silly:

Now, the authors might reply that all of this is trivial, because the traces that researchers find on produce, whether conventional or organic, almost always come in at levels below the EPA’s safety threshold. But:

3. This ignores a growing body of research that pregnant women’s fetuses can be harmed at low exposures of organophosphate pesticides, as can young children.

4. The authors—like the EPA itself—ignore the “cocktail effect” of exposure to several pesticides, say, from a single apple. As Environmental Working Group’s analysis of USDA data shows, conventional produce like apples, blueberries, and bell peppers often carry traces of many pesticides. The EPA regulates pesticide traces only on an individual basis, disregarding possible synergistic effects. The European Commission is starting to take them more seriously. Here’s a report commissioned by the European Commission in 2009:

There is a consensus in the field of mixture toxicology that the customary chemical-by-chemical approach to risk assessment might be too simplistic. It is in danger of underestimating the risk of chemicals to human health and to the environment.

Which brings us to the fifth point:

5. We probably know more about how exposure to low levels of multiple pesticides affect amphibians than we do about how they affect people—and what our amphibious friends are telling us isn’t pretty.

In short, the Stanford study seriously underplays the benefit of going organic to avoid pesticide traces, especially for vulnerable populations like pregnant women and kids. In a future post, I’ll show why it does the same for exposure to antibiotic-resistant pathogens in meat, and doesn’t give organic its due with regard to nutritional benefits.