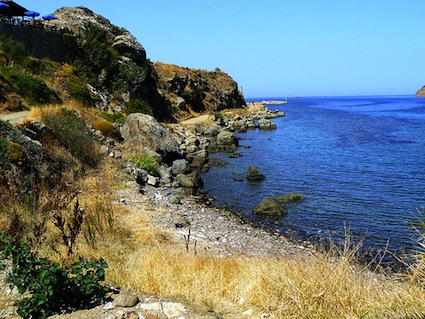 In Sunday’s New York Times Magazine, there’s an extremely evocative article on life on the Greek island of Ikaria, pop. 10,000, whose “jagged ridge of scrub-covered mountains rises steeply out of the Aegean Sea.” The focus is on the unusual longevity and good health of the people who live there. The author, National Geographic writer Dan Buettner, specializes in reporting on what he calls “blue zones”—pockets where populations manage to avoid succumbing to debilitating modern health scourges like Type 2 diabetes, heart disease, and cancer.

Buettner assembled a team of academic researchers to look hard at the island’s demographics. They concluded that Ikarians are “reaching the age of 90 at two and a half times the rate Americans do.” The situation for men is even more extreme: Ikarian men in particular are nearly four times as likely as their American counterparts to reach 90, often in better health. Buettner continues:

But more than that, Ikarians were also living about 8 to 10 years longer before succumbing to cancers and cardiovascular disease, and they suffered less depression and about a quarter the rate of dementia. Almost half of Americans 85 and older show signs of Alzheimer’s. (The Alzheimer’s Association estimates that dementia cost Americans some $200 billion in 2012.) On Ikaria, however, people have been managing to stay sharp to the end.

Genetics can’t explain the phenomenon, Buettner argues. On the next island over, he writes, people “with the same genetic background eat yogurt, drink wine, breathe the same air, fish from the same sea as their neighbors on Ikaria,” but “live no longer than average Greeks.” So, the obvious question here is, what are the Ikarians doing differently? The typical American impulse would be to identify some wonder substance driving the Ikarians’ good health, concentrate it (if not synthesize it in a lab first), stick it in a pill, market it heavily—and then find out the wonder substance is all but worthless. We’ve learned that isolating nutrients, stripping away the context of their presence in whole foods, is not a recipe for health, as Michael Pollan showed in his In Defense of Food. Consuming beta carotene in the context of a carrot is good for you; gulping down a beta carotene pill, it turns out, not so much.

Happily, Buettner doesn’t pursue the reductionist path. In his article, he goes looking not for a “silver bullet” for keeping mortality and ill health at bay, but rather, as he puts it, the “silver buckshot.” And Americans won’t find all the lessons he comes up with dour and puritanical—not by any stretch. Some are downright hedonistic: The Ikarians down two to 3.5 glasses of wine each day—including, apparently, the occasional glass with breakfast. Coffee is indulged at the rate of two to three cups daily. And the afternoon nap, apparently, is observed near universally. “People stay up late here,” a local doctor tells Buettner. “We wake up late and always take naps. I don’t even open my office until 11 a.m. because no one comes before then.”

Other lessons will seem austere to many Americans. Per capita US meat consumption averages to a little more than half a pound a day. Ikarians, by contrast, eat meat on average just five times per month. And Ikarians eat about a quarter as much sugar as Americans do, and very little processed food (although that is beginning to change.) The overall diet is classic Mediterranean. Buettner describes a typical couple’s daily food routine:

[A] breakfast of goat’s milk, wine, sage tea or coffee, honey and bread. Lunch was almost always beans (lentils, garbanzos), potatoes, greens (fennel, dandelion or a spinachlike green called horta) and whatever seasonal vegetables their garden produced; dinner was bread and goat’s milk. At Christmas and Easter, they would slaughter the family pig and enjoy small portions of larded pork for the next several months.

So they’re eating a low-meat, relatively seafood-rich, nutrient-dense diet with plenty of greens and (he emphasizes elsewhere) olive oil. Buettner also mentions a warm beverage they drink which he translates as “mountain tea,” “made from dried herbs endemic to the island,” a rotating, seasonal list that includes wild marjoram, sage, mint, and dandelion leaves. Buetnner had samples of the greens tested in a lab, and they proved to be “rich sources of polyphenols” with “strong antioxidant properties.”

Well, the dietary habits we can mimic and approximate; other aspects of the Ikarian miracle are more elusive:

If you pay careful attention to the way Ikarians have lived their lives, it appears that a dozen subtly powerful, mutually enhancing and pervasive factors are at work. It’s easy to get enough rest if no one else wakes up early and the village goes dead during afternoon naptime. It helps that the cheapest, most accessible foods are also the most healthful — and that your ancestors have spent centuries developing ways to make them taste good. It’s hard to get through the day in Ikaria without walking up 20 hills. You’re not likely to ever feel the existential pain of not belonging or even the simple stress of arriving late. Your community makes sure you’ll always have something to eat, but peer pressure will get you to contribute something too. You’re going to grow a garden, because that’s what your parents did, and that’s what your neighbors are doing. You’re less likely to be a victim of crime because everyone at once is a busybody and feels as if he’s being watched. At day’s end, you’ll share a cup of the seasonal herbal tea with your neighbor because that’s what he’s serving. Several glasses of wine may follow the tea, but you’ll drink them in the company of good friends. On Sunday, you’ll attend church, and you’ll fast on Orthodox feast days. Even if you’re antisocial, you’ll never be entirely alone. Your neighbors will cajole you out of your house for the village festival to eat your portion of goat meat.

Buettner smartly contrasts those ways with our own:

Every one of these factors can be tied to longevity. That’s what the $70 billion diet industry and $20 billion health-club industry do in their efforts to persuade us that if we eat the right food or do the right workout, we’ll be healthier, lose weight and live longer. But these strategies rarely work. Not because they’re wrong-minded: it’s a good idea for people to do any of these healthful activities. The problem is, it’s difficult to change individual behaviors when community behaviors stay the same. In the United States, you can’t go to a movie, walk through the airport or buy cough medicine without being routed through a gantlet of candy bars, salty snacks and sugar-sweetened beverages. The processed-food industry spends more than $4 billion a year tempting us to eat. How do you combat that? Discipline is a good thing, but discipline is a muscle that fatigues. Sooner or later, most people cave in to relentless temptation.

Alas, those temptations are not lost on young Ikarians. “American food culture, among other forces, is beginning to take root in Ikaria,” Buettner reports. “Potato chips and sweetened soda are making their way into stores, and sodas are crowing out mountain tea as the beverage of choice for the island’s youth.” As the old customs fade, “the gap between Ikarian life spans and those of the rest of the world seems to be gradually disappearing,” Buettner writes.

Interestingly enough, here in the United States, where we sacrificed nearly all traditional foodways for the promise of convenience foods in the post-World War II era, trends are working in the opposite direction, at least to an extent. “For people to adopt a healthful lifestyle, I have become convinced, they need to live in an ecosystem, so to speak, that makes it possible,” Buettner writes. “As soon as you take culture, belonging, purpose or religion out of the picture, the foundation for long healthy lives collapses.”

Buettner doesn’t mention it, but here in the land of fast food, the very ecosystems he alludes to are being recreated in farmers markets, CSAs, and in urban-youth programs like Oakland’s People’s Grocery and in public spaces like Detroit’s community gardens. People aren’t just buying, selling, and/or growing food in these spaces; they’re also bonding over food, forming new communities around it. The healthy-ecosystem aspects of local-food projects, I think, are too often undervalued by policymakers and pundits. These mini-ecosytems are, of course, small pockets within a vast food landscape based on cheap sweeteners and fats and pricey marketing campaigns. But they’re a start.