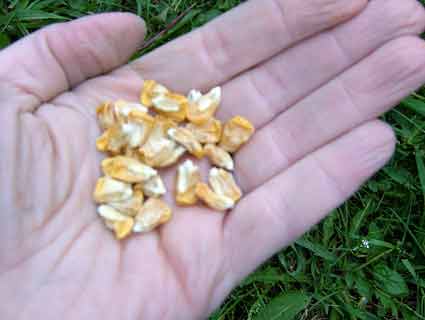 There’s an age-old tradition in Washington of making unpopular announcements when no one’s listening—like, you know, the days leading up to Thanksgiving. That’s when the Obama administration sneaked a tasty dish to the genetically modified seed/pesticide industry.

This treat involves the unceremonious end of the Department of Justice’s antitrust investigation into possible anticompetitive practices in the US seed market, which it had begun in January 2010. It’s not hard to see why DOJ would take a look. For the the crops that cover the bulk of US farmland like corn, soy, and cotton, the seed trade is essentially dominated by five companies: Monsanto, DuPont, Syngenta, Bayer, and Dow. And a single company, Monsanto, supplies nearly all genetically modified traits now so commonly used in those crops, which it licenses to its rivals for sale in their own seeds.

What’s harder to figure out is why the DOJ ended the investigation without taking any action—and did so with a near-complete lack of public information. The DOJ didn’t even see fit to mark the investigation’s end with a press release. News of it emerged from a brief item Monsanto itself issued the Friday before Thanksgiving, declaring it had “received written notification” from the DOJ antitrust division that it had ended its investigation “without taking any enforcement action.”

A DOJ spokesperson confirmed to me that the agency had “closed its investigation into possible anticompetitive practices in the seed industry,” but would divulge no details. “In making its decision, the Antitrust Division took into account marketplace developments that occurred during the pendency of the investigation,” she stated via email. I asked what precisely those “marketplace developments” were. “I don’t have anything else for you,” she replied.  Monsanto, too, is being tight-lipped—a company spokesperson said the company had no statement to make beyond the above-linked press release.

Diana Moss, vice president and senior research fellow of the American Antitrust Institute, told me that the DOJ’s information blackout on the case is unusual—and frustrating. “To have a two-year investigation and close it without a peep in our view does a disservice.” Moss is the author of a 2009 paper concluding that the GM seed market “requires antitrust enforcement and/or legislative relief.”

To get an idea of how far this market has come under the control of just a handful of companies, think of genetically modified seeds as computers—hardware and software. In this rather common but apt analogy, the actual seed is the hardware and the genetically modified traits they carry—like the ability to withstand herbicides, as in Monsanto’s Roundup Ready traits—are the software.

Getting market share data for an industry like seeds is a maddening task. No government agency, including the US Department of Agriculture, tracks it. But it’s not hard to establish that a few companies dominate it, with Monsanto at the top. Indeed, Monsanto alone essentially controls the software-like part of the market, traits: According to Monsanto’s rival, DuPont, Monsanto traits end up in 98 percent of the GM soybeans grown in the US and 79 percent of the corn—a claim Monsanto doesn’t dispute. In a 2009 paper, Iowa State University economist GianCarlo Moschini reported that Monsanto traits are in 78.9 percent of the GM cotton grown here.

What about the hardware side, the seeds themselves? Below is a chart from the agribiz-trade web site AgWeb, showing market-share trends in corn and soy seeds from 2004 to 2011. In corn, we can see that DuPont, Monsanto, Syngenta, and Dow together own more than 80 percent of the market, and the share owned by “local and regional companies” fell by approximately half over the period, and now stands at less than 15 percent. In soy, the same four large companies now together control more than 70 percent of the market, with both “local and regional companies” and “publics/saved seeds” showing sharp declines over the period.

The USDA does keep market share numbers for the cottonseed market (pdf here), and in the 2012 growing season, Monsanto (through its cottonseed line Delta & Pine), Bayer, and Dow (through its Phytogen subsidiary) owned 80 percent of the market among the three of them.

Of course, the fact that a market is dominated by a handful of giant companies doesn’t automatically mean that they have what economists call “market power”—that is, the might to manipulate markets to their own advantage, to the detriment of their customers, in this instance, farmers. It’s only in cases of market power that the DOJ would take action.

So did DOJ make a reasonable decision in dropping its investigation of Monsanto and the broader seed market? It’s impossible to say, given that it refuses to release any details.

In one county, 46.6 percent of farmers reporting having no access to high-quality non-Bt seed.

But there is evidence of potential market power in the industry. For example, one sign of an uncompetitive industry is the ability to raise prices at will, unimpeded by price pressure from rivals. It’s impossible to say, without more information, if the GMO giants have done that—but prices have risen briskly over the past decade. In her above-mentioned 2009 paper, the American Antitrust Institute’s Moss points out that in truly competitive markets, “technologies that enjoy widespread and rapid adoption”—like GM seeds—”typically experience precipitous declines” in price. But between 2000 and 2008, Moss writes, “real seed costs [for farmers] increased by an average annual rate of five percent for corn, almost 11 percent for cotton, and seven percent for soybeans.” And for most of those years, she adds, growth in the price farmers were receiving for their crops didn’t match growth in the price they were paying for their seeds—suggesting a possible squeeze on farmers by the seed industry. Figures supplied me by the Center for Food Safety’s Bill Freese (from USDA data) show that price increases have continued in the years since Moss’ study.

There’s also evidence that farmers lack access to lower-priced seeds. In 2010, University of Illinois researcher Michael Gray surveyed farmers in seven agriculture-intensive counties of Illinois. He asked them if they had access to high-quality corn seeds that weren’t genetically modified to contain Monsanto’s Bt insecticide trait. In all seven counties, at least 32 percent of farmers said “no.” In one county, 46.6 percent of farmers reporting having no access to high-quality non-Bt seed. For them, apparently, they had little choice but to pay Monsanto’s high prices for Bt seeds, whether they needed them or not.

Finally, a competitive market might be expected to be characterized by a high level of innovation—especially a market as high tech as GM seeds. But as the Center for Food Safety’s Freese pointed out to me, the main GM traits we see in the field today are the same as those we saw in the 1990s, when GMOs were rolled out: herbicide resistance and Bt. The industry’s much-heralded next big products—corn and soy engineered to withstand more toxic herbicides than Monsanto’s Roundup—is really just more of the same, intensified: herbicide resistance on steroids. Monsanto did roll out a “drought-resistant” corn variety last December—but the USDA itself, citing Monsanto’s own data, found it to be rather underwhelming.

A high degree of concentration, high and rising prices, limited choice, stagnant innovation—these are the hallmarks of an uncompetitive industry. Monsanto itself vigorously disputes claims of market power (see here and here). Perhaps the Department of Justice’s antitrust regulators considered all of this and had good reasons for ending its investigation with a thud and no action. We can’t know until they show us their work.