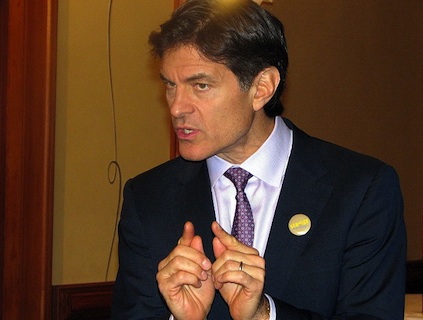 “There’s nothing like a block of frozen spinach to make you feel bad about your family dinner,” observes heart surgeon, TV personality, and health pundit Dr. Mehmet Oz in the latest Time. The advice in Oz’s piece is mostly on point—foodie trends shouldn’t keep people from eating unglamorous, wholesome foods like frozen veggies or canned beans, especially if that’s all they can afford.

But I think the good doctor misdiagnoses the case when he paints organic food as a frivolous luxury:

Organic food is great, it’s just not very democratic. As a food lover, I enjoy truffle oil, European cheeses and heirloom tomatoes as much as the next person. But as a doctor, I know that patients don’t always have the time, energy or budget to shop for artisanal ingredients and whip them into a meal.

I agree there’s no point in worrying about whether everyone has access to fancy oil or Camembert. But organic food is different. For one thing, pesticides are poisonous, and they poison the people who have to deal with them: farmworkers. I can think of few less-snobby reasons for buying organic than that it protects the people who feed us from toxic exposure.

But the people who tend sprayed crops aren’t the only ones at risk from pesticides. So are the very people in Oz’s audience: eaters. Using US Department of Agriculture and Environmental Protection Agency data, the Environmental Working Group has established (latest “Dirty Dozen” study here) that conventionally grown produce often contains a range of low-level pesticide residues. Some samples of conventional grapes had as many as 15 distinct pesticide traces, EWG found. And in a Stanford study released this year, researchers found that organic produce carried substantially less of these chemicals than conventional—and as I demonstrated in a post on the study, the researchers actually understate the risk reduction offered by organic produce in their conclusion.

Moreover, a growing weight of research suggests that regular exposure to even tiny levels of pesticides carries significant health risk—especially for children and the offspring of pregnant women.

Consider the following data points—all from papers published in the past few months.

Pregnant women who showed elevated organophosphate levels in their urine experienced shorter pregnancies and had babies with lower birth weights than women with lower levels.

EWG also points to an April 2012 study finding that 300 pregnant women who showed elevated organophosphate levels in their urine experienced shorter pregnancies and had babies with lower birth weights than women with lower levels. The pregnancies took place after organophosphate use had dropped,” EWG points out, and indicate that “organophosphate exposures must be further curtailed to protect children’s health.” In other words, they’re still out there—and getting into the food supply.

I could go on like this for a while—see here and here—but by now, Oz will have gotten the idea. I know that he’s aware of the risks associated with low-level exposure to toxins, especially for children—Oz made quite a fuss over the problem of arsenic in that kids’ drink par excellence, apple juice.

And I agree with Oz that it’s hard to ask families to pay more for organic foods when budgets are already stretched tight. The EWG’s Dirty Dozen and Clean 15 lists can help consumers prioritize which produce items to try to buy organic and which to worry less about if funds are tight. (Spinach, incidentally, lands on the dirty list).

But what would really be great is if Oz would use his syndicated TV show and Time forum to push for stronger pesticide regulations and more federal support for organic farmers. When those policy goals are achieved, people can eat their frozen spinach without subjecting themselves and their kids to the established risks of pesticide exposure—and farmworkers can grow that spinach without putting themselves at even greater risk. Oz should think about them next time he paints organic as a mere indulgence of the well-to-do.