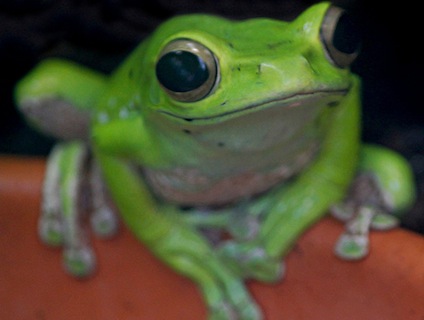 To me, there are few more comforting sights on a farm or in a garden than a frog hopping about amid the crops. Frogs and other amphibians don’t just look and sound cool—they also feast upon the insects that feast upon the plants we eat. These bug-scarfing creatures are a free source of what is known as biological pest control.

But modern industrial agriculture doesn’t have much use for them. It leans on chemistry, not biology, to control pests—and in doing so, it’s probably contributing to the catastrophic global decline of amphibians, a natural ally to farmers for millennia. The irony is stark: In industrial agriculture’s zeal to wipe out pests, it is helping to wipe out those pests’ natural predators. The latest evidence: a new study showing that exposure to common pesticides at levels used in farm fields can kill frogs rapidly.

For a decade or so, it has become increasingly clear that widely used herbicides like Syngenta’s atrazine, in tiny amounts found in streams after running off from farm fields, do crazy things to the sexual development of frogs. Such “endocrine-disrupting chemicals” have what scientists call chronic, not acute, effects on amphibians—that is, they don’t kill them outright, but they alter them profoundly—even change their gender. (See Dashka Slater’s profile of a scientist who documented atrazine’s impact on frogs, earning a backlash from Syngenta.) Monsanto’s blockbuster herbicide Roundup also exerts subtle but important harm on amphibians, research suggests.

Again, this research focuses on what happens to amphibians when they encounter agricultural poisons at low levels in ponds and streams. But what happens when they are actually sprayed with chemicals in farm fields? That’s where the new study, a recent peer-reviewed paper by a group of German and Swiss scientists, comes in. They write that the phenomenon of frogs experiencing direct contact with pesticides has been little-studied, even though the scenario is quite common on the ground—farmland has become one of the “the largest terrestrial biomes on Earth, occupying more than 40% of the land surface,” and thus represents an “essential habitat for amphibians.”

In other words, frogs and related species have little choice but to hang out on farms. What happens when they’re in the wrong place at the wrong time—i.e., on a field when the crop duster shows up?

For one of the pesticides in the study, all of the frogs died within an hour of exposure.

To find out, the researchers subjected groups of frogs to varying levels of a variety of pesticides (a category that includes insect killers, weed killers, and fungus killers) commonly used in Germany and Switzerland. The exposure came at three different levels: one-tenth of the concentration recommended by the manufacturer, at the recommended level, and ten times the recommended level (because farmers don’t always follow the instructions on the bag). And rather than use only the “active” ingredient of each pesticide, as many researchers do, this team used the actual formulation available to farmers. That’s because pesticides are a mixture of active poisons and chemical solvents designed to ensure that the poisons work as intended. And these solvents, too, can have toxic properties.

The results are startling. In the chart below, the red lines represent the percentage of frogs that died within seven days of exposure at the recommended rate. As you can see, for two different fungicides—one called Headline and and another called Captan Omya—frogs had 100 percent mortality rate at the recommended concentration level. For Headline, we learn elsewhere in the study, all of the frogs died within an hour of exposure. All seven pesticides in the study delivered mortality rates at the recommended level well above those of the frogs in the control group, which were sprayed with water. 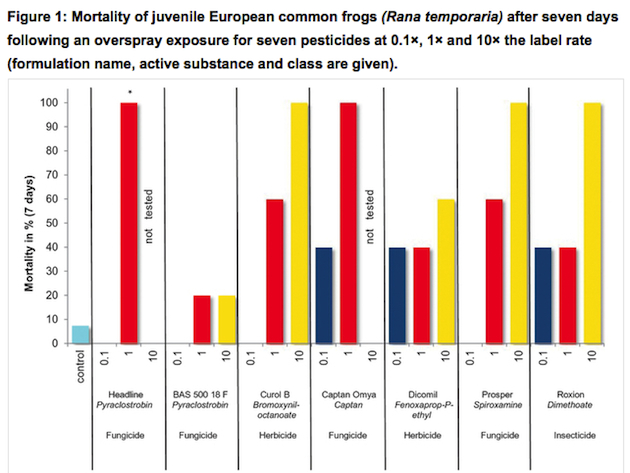 From “Terrestrial pesticide exposure of amphibians: An underestimated cause of global decline?,” published in Science Reports.

Note the two fungicides at the left end of the chart, Headline and BASF 500 18 F, both made by the German chemical giant BASF. The two fungicides share the same active ingredient, a chemical called pyraclostrobin; but they had widely different mortality rates at the recommended concentration level, 100 percent vs. a bit more than 20 percent. What gives? Turns out that the deadlier one, Headline, is a mixture of pyraclostrobin and a petroleum-based solvent called naphtha, with naphtha making up 67 percent of the mix. The less-deadly one contains less than 25 percent naphtha. This result led the researchers to conjecture that that “other chemicals in the formulation may play a major role in the effect size of pesticides.” It should be noted that solvents and other inactive ingredients used in Monsanto’s Roundup herbicide (not included in this study) have also shown toxic effects in published research.

BASF’s pyraclostrobin-based herbicides are widely used in the US. BASF Crop Protection USA promotes Headline as a kind of wonder-substance. On its website, the company declares:

I asked BASF to respond to the study, and in an emailed statement, the company responded via email that it “takes these findings very seriously and will study them further.” But it also disputed their significance:

The study design neither reflects conditions of realistic agricultural use in practice nor the natural behavior of the animals.  Amphibians are not exposed to such pesticide concentrations in practice and under normal agricultural conditions. For instance, Pyraclostrobin is not applied to the bare ground but to the crop, and the plants in the field will certainly reduce the exposure to the amphibians. In addition, amphibians tend to hide (under leaves or in the soil) during times of application. Accordingly, BASF considers the risk to amphibians resulting from Pyraclostrobin to be low in practice and under normal agricultural conditions.

But the paper addresses that criticism. “Although interception by crops may reduce exposure, repeated pesticide applications in a growing season might result in multiple contacts with a variety of products,” the study states. If all it takes to kill a frog is a single spray, you’re using a problematic pesticide, full stop.