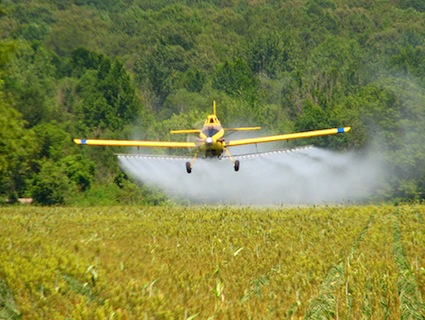 Last year’s drought took a big bite out of the two most prodigious US crops, corn and soy. But it apparently didn’t slow down the spread of weeds that have developed resistance to Monsanto’s herbicide Roundup (glyphosate), used on crops engineered by Monsanto to resist it. More than 70 percent of all the the corn, soy, and cotton grown in the US is now genetically modified to withstand glyphosate.

That pretty much describes the situation last year, according to a new report from the agribusiness research consultancy Stratus. Since the 2010 growing season, the group has been polling “thousands of US farmers” across 31 states about herbicide resistance. Here’s what they found in the 2012 season: 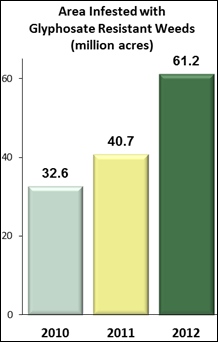 Superweeds: First they gallop, then they roar. Graph: Stratus

• Nearly half (49 percent) of all US farmers surveyed said they have glyphosate-resistant weeds on their farm in 2012, up from 34 percent of farmers in 2011.
• Resistance is still worst in the South. For example, 92 percent of growers in Georgia said they have glyphosate-resistant weeds.
• But the mid-South and Midwest states are catching up. From 2011 to 2012 the acres with resistance almost doubled in Nebraska, Iowa, and Indiana.
• It’s spreading at a faster pace each year: Total resistant acres increased by 25 percent in 2011 and 51 percent in 2012.
• And the problem is getting more complicated. More and more farms have at least two resistant species on their farm. In 2010 that was just 12 percent of farms, but two short years later 27 percent had more than one.

So where do farmers go from here? Well, Monsanto and its peers would like them to try out “next generation” herbicide-resistant seeds—that is, crops engineered to resist not just Roundup, but also other, more toxic herbicides, like 2,4-D and Dicamba. Trouble is, such an escalation in the chemical war on weeds will likely only lead to more prolific, and more super, superweeds, along with a sharp increase in herbicide use. That’s the message of a peer-reviewed 2011 paper by a team of Penn State University researchers led by David A. Mortensen. (I discussed their paper in a post last year.)

And such novel seeds won’t be available in the 2013 growing season anyway. None have made it through the US Department of Agriculture’s registration process. The USDA was widely expected to award final approval on Dow’s 2,4-D/Roundup-resistant corn during the Christmas break, but didn’t. The agency hasn’t stated the reason it hasn’t decided on the product, known as Enlist, but the nondecision effectively delays its introduction until 2014 at the earliest, as Dow acknowledged last month. Reuters reporter Carey Gillam noted that the USDA’ delay comes amid “opposition from farmers, consumers and public health officials” to the new product, and that these opponents have “bombarded Dow and US regulators with an array of concerns” about it.

So industrial-scale corn and soy farmers will likely have to muddle along, responding in the same way that they have been for years, which is by upping their herbicide use in hopes of controlling the rogue weeds, as Washington State University’s Charles Benbrook showed in a recent paper (my post on it here). That means significant economic losses for farmers—according to Penn State’s Mortensen, grappling with glyphosate resistance was already costing farmers nearly $1 billion per year in 2011. It will also likely mean a jump in toxic herbicides entering streams, messing with frogs and polluting people’s drinking water.

For a good idea of what’s in store, check out this piece in the trade mag Corn & Soy Digest on “Managing Herbicide-Resistant weeds.” Here’s the key bit—note that “burndown” means a complete flattening of all vegetation in a field with a broad-spectrum herbicide such as paraquat, an infamously toxic weed killer that’s been banned in 32 countries, including those of the European Union:

For those with a known resistance problem, it’s not uncommon to see them use a fall burndown plus a residual herbicide, a spring burndown before planting, another at planting including another residual herbicide, and two or more in-season herbicide applications. “If you can catch the resistant weeds early enough, paraquat does a good job of controlling them. But once Palmer amaranth [a common glyphosate-tolerant weed] gets 6 ft. tall, you can’t put on enough paraquat to kill it,” [one weed-control expert] says.

But of course there’s another way. In a 2012 study I’ll never tire of citing, Iowa State University researchers found that if farmers simply diversified their crop rotations, which typically consist of corn one year and soy the next, year after year, to include a “small grain” crop (e.g. oats) as well as offseason cover crops, weeds (including Roundup-resistant ones) can be suppressed with dramatically less fertilizer use—a factor of between 6 and 10 less. And much less herbicide means much less poison entering streams—”potential aquatic toxicity was 200 times less in the longer rotations” than in the regular corn-soy regime, the study authors note. So, despite what the seed giants and the conventional weed specialists insist, there are other ways to respond to the accelerating scourge of “superweeds” than throwing more—and ever-more toxic—chemicals at them.