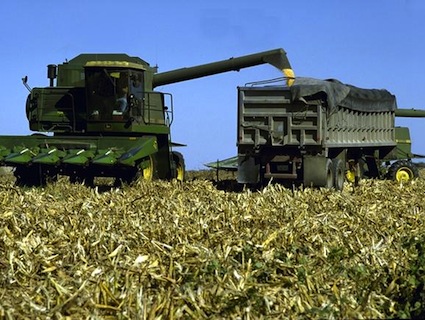 Every year, nearly 30 percent of US farmland gets planted in corn, and our farmers produce close to 40 percent of the corn produced on Earth.

So why do we grow so much of this one crop—and what do we get for the effort? I’ve been pondering those questions since I began writing about food politics eight years ago. The answers I’ve come up with (see here and here for examples) have not been popular with the loose alliance of firms that provide seeds and agrichemicals to farmers to grow corn and that buy the harvest and turn it into a variety of products. Back in 2010, a corn-industry PR person once lashed out at my conclusions as the “rantings of an elitist with an anti-corn agenda.”

I wonder what my critic, Cathryn Wojcicki, or @CornyCate as she’s known on Twitter, will think of this cold-blooded examination of our corn agriculture from Jonathan Foley, Director, a professor of ecology at University of Minnesota. Foley won’t be easy for the industry to dismiss. He’s the coauthor of a 2012 Nature study finding that yields from industrial-scale farming trump those of organic by 25 percent—an analysis I criticized as narrow and incomplete. So he’s not exactly an “anti-corn elitist” by disposition.

In his new piece, Foley trains a skeptic’s eye on the place of corn in our agriculture and finds it … bizarre.

He starts with corn’s appeal:

It has incredibly high yields compared with most other U.S. crops, and it grows nearly anywhere in the country, especially thriving in the Midwest and Great Plains. Plus, it can be turned into a staggering array of products. Corn can be used for food as corn flour, cornmeal, hominy, grits or sweet corn. It can be used as animal feed to help fatten our hogs, chickens and cattle. And it can be turned into ethanol, high-fructose corn syrup or even bio-based plastics. 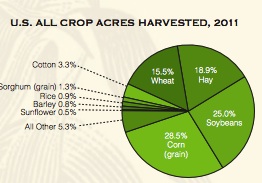 The corn-soy behemoth covers more than half of US farmland. National Corn Growers Association, World of Corn 2012

But the analysis quickly turns devastating. Foley distinguishes between corn as a crop, which is highly productive and high-yielding; and corn as the centerpiece of an agriculture system, which is “inefficient at feeding people.” How can that be? He notes that very little of the corn crop goes directly to our plates. The great bulk of its goes to animal feed, ethanol, and to exports (mainly as animal feed. This leads Foley here:

For corn-fed animals, the efficiency of converting grain to meat and dairy calories ranges from roughly 3 percent to 40 percent, depending on the animal production system in question. What this all means is that little of the corn crop actually ends up feeding American people. It’s just math. The average Iowa cornfield has the potential to deliver more than 15 million calories per acre each year (enough to sustain 14 people per acre, with a 3,000 calorie-per-day diet, if we ate all of the corn ourselves), but with the current allocation of corn to ethanol and animal production, we end up with an estimated 3 million calories of food per acre per year, mainly as dairy and meat products, enough to sustain only 3 people per acre. This is lower than the average delivery of food calories from farms in Bangladesh, Egypt and Vietnam. [Emphasis added.]

To generate this rather marginal return, we’re devoting massive resources. How much? Foley:

In the United States, corn uses more land than any other crop, spanning some 97 million acres —  an area roughly the size of California. U.S. corn also consumes a large amount of our freshwater resources, including an estimated 5.6 cubic miles per year of irrigation water withdrawn from America’s rivers and aquifers. And fertilizer use for corn is massive: over 5.6 million tons of nitrogen is applied to corn each year through chemical fertilizers, along with nearly a million tons of nitrogen from manure. Much of this fertilizer, along with large amounts of soil, washes into the nation’s lakes, rivers and coastal oceans, polluting waters and damaging ecosystems along the way. The dead zone in the Gulf of Mexico is the largest, and most iconic, example of this. 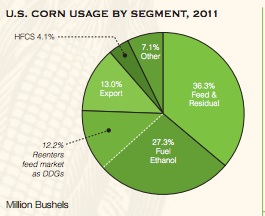 Where does all the corn go? Mainly, into feedlots, ethanol factories, and high-fructose corn syrup (HFCS). National Corn Growers Association, World of Corn 2012

So let’s get this straight. We’re devoting nearly a third of our farmland—much of it, as in the Midwest prairie region, some of the richest farmland in the world—to a resource-sucking agriculture system that’s less efficient than than the one in Bangladesh. And really, to get at the full absurdity of our corn-fed agriculture, you have to factor in corn’s single rotation mate, soybeans, which also go largely to animal feed and other industrial uses. The corn system also sucks up massive amounts of public resources in the form of crops subsidies, Foley notes, and is also prone to shocks because of its lack of diversity. So now you’ve got more than half of US farmland tied up in an incredibly wasteful, risky activity.

What would be a better way? Here’s Foley:

This reimagined agricultural system would be a more diverse landscape, weaving corn together with many kinds of grains, oil crops, fruits, vegetables, grazing lands and prairies. Production practices would blend the best of conventional, conservation, biotech and organic farming. Subsidies would be aimed at rewarding farmers for producing more healthy, nutritious food while preserving rich soil, clean water and thriving landscapes for future generations. This system would feed more people, employ more farmers and be more sustainable and more resilient than anything we have today.

Foley might have pointed to this 2012 Iowa State University study demonstrating the many ecological benefits that would proceed from a shift to more diverse farm systems in the Midwest. Or this new study from Cornell researchers finding that much less nitrogen pollution leaches from fields planted in diverse rotations vs. those planted in what the authors call “corn-soybean monocultures.”

So what’s the holdup? As Foley notes, the problem lies not with farmers but with farm policy and the market/political power of agribusiness—a “behemoth largely created by lobbyists, trade associations, big businesses and the government.” Under current conditions, farmers “would be crazy not to grow corn,” he continues; they’re “simply delivering what markets and policies are demanding.” In short, the corn system works for agribusiness, and the industry has the lobbying might to keep its favored policy agenda in place.