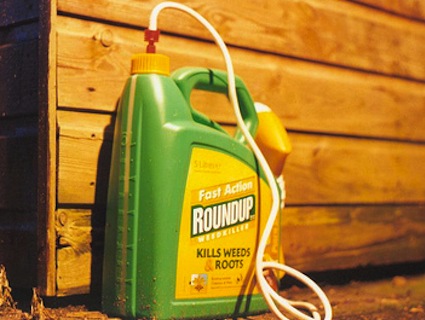 Genetically modified seed giant Monsanto likes to trumpet its “commitment to sustainable agriculture.“ The story goes like this: by generating novel, high-tech crop varieties, Monsanto will wean farmers off of synthetic chemical poisons. The company even markets its flagship product, seeds genetically engineered to survive its own Roundup weed killer, as a tool they can use to to “decrease the overall use of herbicides.”

But as I’ve shown before, herbicide use has actually dramatically ramped up as the Roundup Ready technology conquers vast swaths of US farmland. That’s because weeds quickly developed resistance to it, forcing farmers to apply ever-larger doses and resort to older, more toxic herbicides to combat resistant weeds. And while the company has tried hard to leave behind its past as a purveyor of toxic chemicals and rebrand itself as a technology company, those toxic chemicals remain central to its growth and profitability, as its latest quarterly profit report shows.

The report—press release here—cheered investors, driving Monsanto shares to their highest levels since 2008. Here’s the main bit, lifted from the press release (note that by “second quarter,” the company means the January to March period): 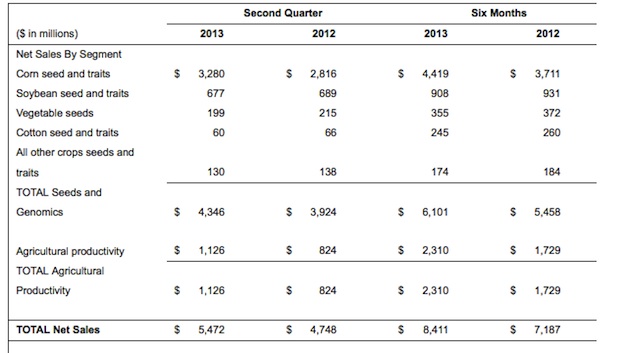 Note that the company consists of two main segments: what it calls “Seeds and Genomics,” which involves sales of seeds, obviously, plus licensing fees on genetically modified traits; and “Agricultural Productivity,” which means, essentially, chemicals, mainly Roundup in a variety of forms. Seeds and Genomics is by far the largest of the two in terms of contribution to overall sales, but good old Agricultural Productivity is still really important. Indeed, its sales shot up from $824 million in second-quarter 2012 to $1.12 billion in the same time period of this year—that’s an amazing 36 percent jump.

By contrast, Seeds and Genomics sales went from $3.92 billion to $4.35 billion over the same time span—just a 10 percent rise.

Overall, the herbicide contribution to Monsanto’s total sales went from 17 percent in second-quarter 2012 to 20 percent in the the same period of 2013.

Let’s dig a little deeper into the Seeds and Genomics part of the above chart. Note that for every business line but one—corn seed and traits—sales declined in second-quarter 2013 compared to the same period of a year before. Monsanto’s corn business is booming—sales went from $2.816 billion to $3.28 billion—a 16 percent gain. Everything else, though—soybeans, cotton, vegetables, etc.—stagnated. (And the same trend holds true when you look at the six-month comparison, also shown in the above chart.).

Widespread use of Bt corn did reduce insecticide use for several years, but certain insects are now developing resistance to it.

The press release does not exactly trumpet the fact that Roundup plays a massive role in driving its growth. But it does declare that “the company remains focused on its established Roundup® strategy.” I’ll say.

But Roundup isn’t Monsanto’s only strategy triggering an surge in chemical use. Most of the corn seed Monsanto sells is engineered to contain a gene from Bacillus thuringiensis (Bt), a soil bacteria that’s toxic to bugs. Widespread use of Bt corn did indeed reduce insecticide use on corn for several years, but as I’ve reported before, certain insects are developing resistance to it. Predictably, farmers are planning to react by resorting to chemical pesticides, according to Michael Gray, an entomology professor at University of Illinois who polls farmers on planting decisions. Here’s the trade magazine Ag Professional:

“From my perspective, the escalation of soil insecticide use along with corn rootworm Bt hybrids has been fueled primarily by concerns about Bt resistance and high commodity prices,” he said. [Emphasis added.]

Far from ushering in an era of widespread sustainable agriculture, Monsanto and its products are keeping farmers stranded on what ecologists call a “pesticide treadmill”—never-ending chemical warfare against fast-adapting ecosystems.