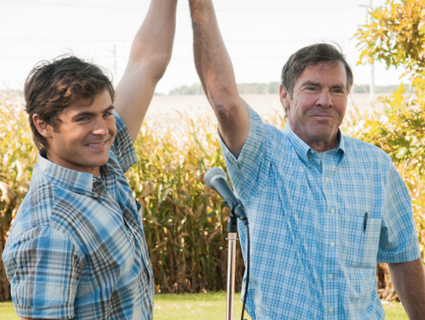 At Any Price, a bleak family drama set against the backdrop of the Corn Belt, is essentially Death of a Salesman, but with genetically modified superseeds.

The film is co-written and directed by Ramin Bahrani, who the late critic Roger Ebert dubbed the new “director of the decade,” soon after seeing Bahrani’s 2007 film Chop Shop. At Any Price stars Dennis Quaid and Zac Efron (last seen getting peed on by Nicole Kidman in a Lee Daniels art film last year) as a father and son living their lives of noisy desperation.

Quaid plays Henry Whipple (no, not that Henry Whipple), an adulterous farmer and salesman entrenched in the ruthless, multimillion-dollar rivalry between Iowa’s big-business farmers. Henry becomes the target of a corporate investigation after illegally washing and reselling patented genetically modified seeds. Efron plays Dean, a local stock car racing champion who dreams of ditching the family business and making a name for himself as a NASCAR driver.

The pair’s disenchantment and bitterness result in a wave of betrayal, anger, and violence in their otherwise peaceful Midwestern town. The film is a quietly disturbing little picture, and features some magnificent acting, especially by Quaid.

The film is not (as Bahrani is quick to point out) in any way political, even though the story prominently involves GMOs, a controversial and extremely political topic these days. The origin of this apolitical film, however, is indeed rooted in Bahrani’s very political interests. In a conversation I had with Bahrani and Quaid, the 38-year-old director explained how he went about writing At Any Price:

I was curious where my food was coming from. I was reading authors like Michael Pollan…And I started realizing that farms aren’t romantic places anymore—they’re big businesses. So Michael Pollan and I became email friends, and I asked him to introduce me to George Naylor, who’s a farmer in Iowa who was featured in [Pollan’s 2006 book] The Omnivore’s Dilemma. So I went out and I lived with George for many months, and when I went out there, all the farmers kept telling me, “expand or die, get big or get out.” And I met a seed salesman, [and] I never knew there was such an occupation as “GMO seed salesman”…And [he] made me think of Arthur Miller’s Death of a Salesman. And I thought combining these things would be a way to tell a human and emotional story…When you have a lot of race cars and infidelity, it’s hard to be an “agenda film.”

(So there you have it: You can thank Michael Pollan for indirectly causing the development of Zac Efron‘s newest movie.)

Bahrani pulled from John Steinbeck, John Ford, and Peter Bogdanovich for narrative and stylistic influences. He also shadowed several Iowa farmers, incorporating their sentiments and commentary into his screenplay. One day, Bahrani noticed that a customer of one of the farmers owned a stock car for figure 8 racing—an observation he used to craft Efron’s character. “I YouTube’d [figure 8 racing] that night, and I made a point to keep going to Iowa to go see races,” Bahrani says. “I thought it would be a good contrast [for the two characters]…It had a different pace, and a different energy, and a different adrenaline.”

Dennis Quaid didn’t have time to conduct anything close to this level of research for his role. His learning experiences were all in the midst of production: “We shot it on a real farm,” Quaid says. “I didn’t have a trailer for this; it was my car or the living-room couch of the Hermans, the family [whose] farm we were shooting on… I spent my time with them, trying to soak up the atmosphere.”

Check out the trailer for this tense and surprising drama:

At Any Price gets a wider release on Friday, May 3. The film is rated R for sexual content including a strong graphic image, and for language. Click here for local showtimes and tickets.