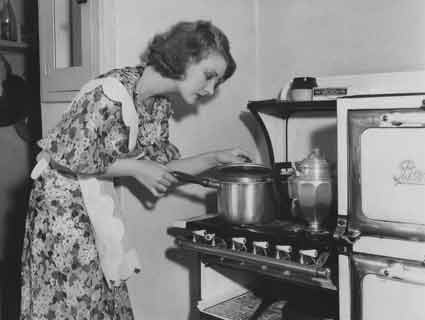 “Is Michael Pollan a sexist pig?” wonders the title of a recent Salon piece by Emily Matchar, which is an excerpt of her just-released book, Homeward Bound: Why Women Are Embracing the New Domesticity. The Salon headline turns out to be mainly a lunge for clicks—the excerpted passage only glancingly concerns Pollan, and it has nothing to say about his new book Cooked, which clearly hadn’t come out when Matchar was writing hers.

But both Matchar in her essay and Pollan in his new book raise important questions about gender, cooking, and what we might as well follow Matchar in calling the “new domesticity”—issues I didn’t get to in my own recent review of Cooked.

Matchar—quite accurately, I think—places women at the center of the the budding movement to challenge industrial food. Women, she writes, are “disproportionately represented in the unique-to-the-twenty-first-century worlds of artisan food businesses, urban homesteading, food activism, and food blogging.”

Most of her piece amounts to a nuanced, sympathetic critique of the new domesticity. Pollan emerges as her foil when she defends feminism against the charge that it drove women out of the kitchen and led to the decline in cooking. Pollan came perilously close to making that argument in a 2009 New York Times Magazine essay, the seed that germinated into Cooked.

In that piece, Pollan declared Betty Friedan’s 1963 opus The Feminine Mystique the “book that taught millions of American women to regard housework, cooking included, as drudgery, indeed as a form of oppression.” That’s an overreach—a little like calling James Baldwin’s The Fire Next Time, also published in 1963, the book that taught African Americans that racism sucks. These works illuminated and helped articulate the  rebellions against the racial and gender status quos of the era, but they didn’t generate them.

And of course, cooking does become drudgery when you’re forced to do it whether you want to or not—and it was the power relations around the act of cooking, not cooking itself, that drove Friedan’s ire.

Even Julia Child, born in 1912, grew up with servants in the kitchen and scant memories of her mother whipping up dinner.

To be fair to Pollan, he offers a revised reading of Friedan’s impact on cooking in Cooked. He does write that “second-wave feminists like Betty Friedan depicted all housework as a form of oppression”—still conflating a critique of the power relations that surround housework with a critique of housework itself. But he continues: “[T]he food industry—along with falling wages of American families, which is what drove most women into the workforce beginning in the 1970s—probably had more to do with the decline of cooking than feminist rhetoric.”

At another point, he adds: “For the necessary and challenging questions about who should be in the kitchen, posed so sharply by Betty Friedan in the Feminist Mystique, ultimately got answered by the food industry: No one! Let us do it all!” That’s well said.

Yet Matchar does level a charge against Pollan that sticks: that he bases much of his analysis of the US cooking scene on history tinged with nostalgia. Throughout the book, Pollan acts as if everyone was cooking until a generation or two ago. “Most of us have happy memories of watching our mothers in the kitchen,” he writes. At another point, he wants to know why food-centered TV shows became so popular “at the precise historical moment [i.e., the present] when Americans were abandoning the kitchen.” Matchar delivers a history lesson:

In Colonial America, kitchen work was viewed as a lowly chore, often farmed out to servants (who, needless to say, did not spend a lot of time exulting in the visceral pleasures of pea shucking). In the 1800s, middle-class women supervised immigrant kitchen maids (or slaves), while pioneer women and rural housewives sweated over wood fires and heavy iron pots.

In other words, as Hanna Raskin makes clear in her well-researched Seattle Weekly review of Cooked, class power has long exempted a large swath of the population from having to get their hands dirty in the kitchen—and not just men, but women, too. Here’s Raskin:

Although 1870 represented the pinnacle of the domestic-service industry, as measured by the percentage of working women employed by it, the national reliance on hired help hadn’t faded decades later. In Domesticity and Dirt: Housewives and Domestic Servants in the United States, 1920-1945, Phyllis Palmer cites a 1937 Fortune survey showing “70 percent of the rich, 42 percent of the upper middle class, 14 percent of the lower middle class, and 6 percent of the poor reported” hiring help.

While reading Raskin, I remembered I had made similar points about Pollan’s nostalgic view of the history of cooking back in 2009, in response to his Times Magazine piece (see here and here). I had just happened upon a great 1989 Terry Gross interview with Julia Child, whom Pollan lionizes as a paragon of a golden age when cooking mattered and Americans practiced it regularly. From my second 2009 post:

In the interview, we find out that Child herself didn’t grow up cooking. She says: “I grew up in the teens and ’20s, when most people had—middle class people—had maids or someone to help.” She reveals that her mother cooked seldom, and then only two dishes: Welsh rabbit (a kind of cheese sandwich) and baking-soda biscuits. As for herself, “I didn’t do any cooking then at all.”

So even Julia Child, born in 1912, grew up with servants in the kitchen and scant memories of her mother whipping up dinner—although, to the 1960s-era audience of her television show, live-in cooks were likely much less common than they were during Child’s 1920s childhood, because the cost of labor had risen over the decades. But the point stands: People with sufficient means have long been able to opt out of cooking. What I wrote back in 2009 still sums up my thoughts today:

Pollan was right: people do need to revalue the craft of cooking, to embrace it as a quotidian pleasure, not a mere chore. But if we manage convince them of that, we’ll have achieved something new, not returned to a lost past.

While I think Matchar is right that it’s women who are driving the new push to liberate the kitchen from the food industry’s grip, men, too, are participating heavily in the new domesticity. And Pollan’s brilliant, flawed book—as I wrote in my review, it’s a fantastic read—will likely attract yet more men into the realm of domestic production. And if it does, a so-called “sexist pig” will have helped create a broad-based, nonsexist cooking culture here in the Fast Food Nation.