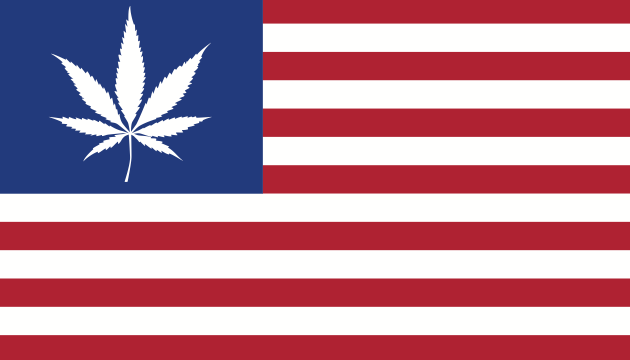 A hemp flag will fly above the Capitol on our nation’s birthday this year to celebrate a recent legislative victory for the cannabis lobby.

Growing hemp is illegal under federal law. Even in the 11 states where cannabis cultivation is technically allowed under state law, federal law trumps that unless the feds grant farmers specific permission. In June, Rep. Jared Polis (D-Colo.) introduced an amendment to the farm bill in the House that would allow colleges and universities in states that permit cultivation of the plant to grow industrial hemp for research purposes. The amendment passed by a vote of 225 to 200. The farm bill it was attached to failed in late June, but Polis’ request to commemorate the amendment’s success by flying a hemp flag on July 4 had already been submitted. On Wednesday, the Capitol’s flag office granted the request.

“Last month, I was proud to hold an American flag made of hemp on the floor of the House of Representatives as I joined my colleagues from both sides of the aisle in favor of a commonsense amendment to the farm bill,” Polis said in a statement Wednesday.  Reps. Thomas Massie (R-Ky.) and Earl Blumenauer (D-Ore.) cosponsored the amendment.

Hemp is a type of cannabis plant and a cousin of marijuana. It is used to make a range of products, from paper and cloth to biofuel and auto parts. Polis, whose home state allows hemp cultivation, wants to see the plant made legal throughout the US. In the statement Wednesday, he touted “the important role [hemp] can play in America’s economic future.” As Pierce Willans of Policy Mic explains:

The US is the world’s number one consumer of hemp, with total sales reaching $500 million dollars in 2012. Unfortunately, that money is benefiting Canadian, rather than American farmers. 90% of the hemp consumed in the United States is produced in Canada, where it has been legal since 1998… [M]any farmers would love to see hemp made legal here, so that money could be used to boost the U.S. economy, rather than Canada’s.

Colorado wasn’t the only state pushing for hemp legalization through the farm bill. Sens. Rand Paul (R-Ky.) and Mitch McConnell (R-Ky.) also advocated for an amendment to the Senate version of the bill that would have removed hemp from the federal government’s list of controlled substances. Senate Democrats blocked consideration of the amendment.

The lawmakers argue that hemp is unfairly stigmatized; the plant is different from weed in that it contains negligible amounts of the mind-altering compound THC. “Hemp is not marijuana,” said Polis, “and at the very least, we should allow our universities—the greatest in the world—to research the potential benefits and downsides of this important agricultural commodity.” (Polis has also introduced legislation to legalize marijuana nationwide.)

Besides, nothing could be more patriotic. George Washington and Thomas Jefferson grew hemp. And the first American flag was made of hemp. The hemp flag flying over the Capitol on Thursday will be the first since the government began outlawing the plant in the 1930s.