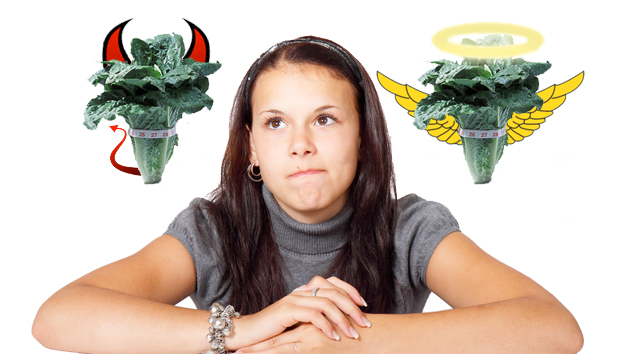 I’m a major salad enthusiast. I’m not just saying that to sound virtuous—I really like the stuff, especially when it’s drizzled with balsamic and a good olive oil and paired with a crusty piece of toast. Since we’ve already established that I’m a lazy cook and that I love Trader Joe’s, you probably won’t be surprised to hear that I usually opt for TJ’s bagged lettuce mixes instead of whole heads. Packaged greens are perfect: all the salad, none of the tedious salad spinner.

So you can imagine my disappointment when, last week, I heard author Jo Robinson trash bagged lettuce on Fresh Air. (My colleague Tom Philpott recently wrote about her new book Eating on the Wild Side: The Missing Link to Optimum Health.) “Many of these prepackaged greens might be two weeks old,” said Robinson ruefully. “They’re not going to taste as good, and many of their health benefits are going to be lost before we eat them.” Instead, she suggested, I should buy my lettuce whole and coddle it a bit. “If you take your lettuce right from the store and rinse it and dry it—and then if you rip it into bite-sized pieces before you store it—you’re going to increase the antioxidant activity…fourfold.”

“What I know is that the bagged, triple-washed variety is enormously water costly.”

I’m not sure that the promise of an antioxidant payoff could carry me through the doldrums of lettuce washing and tearing. But Robinson’s reality check also got me wondering: What about the potential environmental benefit of bagged lettuce? Isn’t it much more efficient for all that washing to be done in bulk, rather than leaf by annoying leaf in my kitchen sink? I decided to call some experts.

Now, no one I talked to was aware of any actual studies about lettuce and the environment, and they were careful to emphasize that their responses were just speculation. But they brought up some interesting points. Gidon Eshel, a professor at Bard College’s Center for Environmental Policy, reminded me that ever since the great bagged spinach E. coli scare of 2006—which sickened 205 people and killed 3—produce companies have been triple washing most of their packaged greens. “What I know is that the bagged, triple-washed variety is enormously water costly,” Eshel said. “I visited such an operation and saw for myself. I don’t have numbers sadly, but the washing was just staggering.”

But Eshel noted that the location of such washing is a key factor: If it’s in the Northeast, where there’s generally water to spare, it’s not such a big deal. “If, on the other hand, it’s in [California’s] Central Valley, then it most likely becomes the single most important environmental consideration, and the triple-washed thing becomes very difficult to defend.” According to the federally funded Agricultural Marketing Research Center, 90 percent of US lettuce is produced in California and Arizona.

And water isn’t the only resource that bagged lettuce uses. Sean Cash, an associate professor of agriculture, food, and the environment at Tufts University’s Friedman School of Nutrition and Science and Policy, pointed out that bagged salads require much more mechanical prep work than heads of lettuce. (Machines require electricity to tear lettuce into bite-sized pieces, whereas us people who do it require only zenlike focus and patience.) “The processing and packaging of bagged salad would still outweigh the cost of making the plastic bags that a consumer might use [to carry home whole heads of lettuce] at the store,” Cash said. “And it’s not clear to me that for bagged salad there would be less food waste at an industrial processor (although they may handle it more efficiently).”

And what about that E. coli threat? Even in this age of triple washing and rigorous germ testing, should we still worry that our greens may harbor dangerous pathogens? A 2010 Consumer Reports investigation suggests that the answer is yes. Researchers tested 208 containers of greens from 16 different brands; while they didn’t find any of the big-name food-borne pathogens like E. coli or salmonella, they did turn up evidence of coliforms and enterococcus, “bacteria that are common indicators of poor sanitation and fecal contamination.” More than a third of the samples tested contained coliforms that surpassed levels deemed acceptable by food safety experts, and about a fifth had unacceptable levels of enterococcus. Just this past February, Salinas, Caliornia-based Taylor Fresh Foods, Inc. voluntarily recalled its prepackaged organic baby spinach in 36 states because of potential E. coli contamination. (Meanwhile, in cuter/weirder news, in 2011 a woman in Pasadena found a live frog in her Costco organic bagged greens, took him home, and named him Dave.)

I couldn’t find any literature on pesticide residues in bagged greens, but it’s likely that the triple washing gets rid of most of the chemicals. Still, lettuce is a notoriously pesticide-intensive crop—the Environmental Working Group lists it as number 14 on its tally of the most chemical-laden produce.

So do I have to ditch my beloved bagged salads? Not if it’s going to mean I ditch my daily serving of veggies altogether, says Cash. Packaged greens are “a big win for some (not all) consumers in terms of convenience—folks who might not eat as many leafy greens if the convenience wasn’t there.” I don’t think I fit into the latter category—so I should probably start buying my lettuce whole and spend an extra few minutes washing and cutting my lettuce at home to cut down on water, energy use, and maybe even nasty bugs. Okay, okay, Jo Robinson and salad spinner, you guys win.