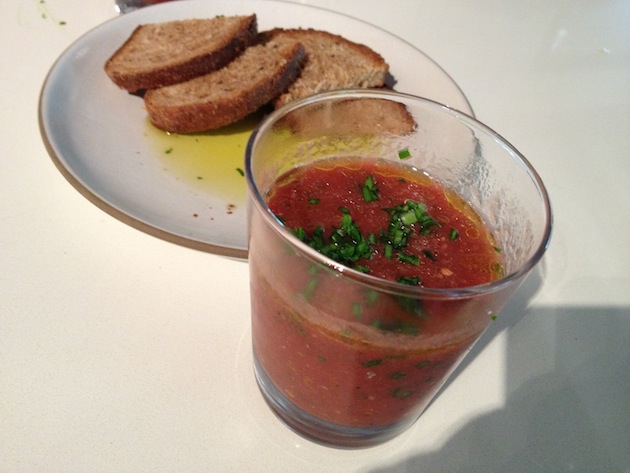 Everyone chill—I've got this. Tom Philpott

Much of the East Coast has been gripped by a brutal heat wave. Here in Austin, we call such weather “summer.” It’s the time of year when I grope for ways to feed myself while applying as little heat as possible. And one of my go-to hot-weather dishes in gazpacho, the iconic tomato-based raw soup of Spain.

There are nearly as many styles of gazpacho as there are households in Andalucía, the southern province where it was born. There are smooth versions, chunky versions, some thickened with bread, some not. I love them all. This time around, wilting from a stretch of high-90s weather, I wanted a simple, light, even drinkable gazpacho—and a spicy one. I learned many years ago on a searing-hot Mexican beach that eating fiery foods had the paradoxical effect of helping me reconcile with the heat.

But you don’t want your gazpacho to end up too spicy—lest (as has happened to me) you be accused of serving your friends and family salsa disguised as soup. You want just enough heat to tickle the back of the throat, whetting the palate for another sip. So add whatever chile you use in small amounts and adjust upward as needed. I used something I can’t live without in summertime: sliced red jalepeño chiles I had put up in apple-cider vinegar. Adding a couple of slices at a time to the blender and tasting between whirs, I nailed my desired level of heat.

To further confound the salsa charge, you’ll want to enliven it with a couple of herbs that aren’t cilantro, which is often found in Mexican salsas. Parsley and chives do the trick.Traditional gazpacho relies on sherry vinegar to add a little zest. This is an excellent choice; but I used a splash or two of the cider vinegar from my jar of chiles.

Serve this gazpacho as an appetizer with toasted bread dipped in olive oil. Provecho! 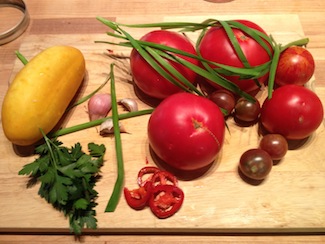 Put about half of the tomatoes into a blender and whir until smooth. (This will make room for the rest.) Now add everything else, holding back some of the chile, and leaving out the the garnishes. Whir until smooth. Taste, and consider whether adding more salt, chile, or vinegar is desirable. Adjust accordingly, and whir again. Place the blender in the fridge for at least an hour to chill, and put some small drinking glasses, one for each serving, into the freezer.

When you’re ready to serve, remove the blender of gazpacho from the fridge and give it one last whir. To serve, fill each chilled glass about three-quarters way with gazpacho, and add a dash of olive oil. Stir with a spoon to incorporate, and top with chopped herbs. Encourage everyone to sip it like a beverage.

Store any leftovers in a glass jar with a tight-fitting lid, in the fridge. It will hold peak flavor for about 24 hours.