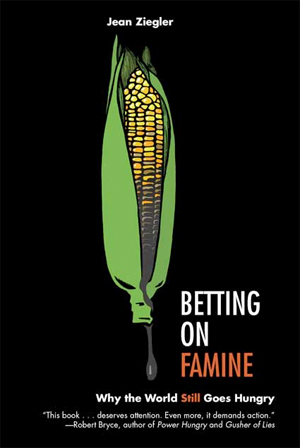 Courtesy of The New Press

By Jean Ziegler, translated from the French by Christopher Caines

Jean Ziegler, the former Special Rapporteur for Food for the United Nations, begins his new book with two disturbing statistics. “In its current state, the global agricultural system would in fact, without any difficulty, be capable of feeding 12 billion people, or twice the world’s current population,” he writes. And yet, “every five seconds, a child under the age of ten dies of hunger.”

In Betting on Famine: Why the World Still Goes Hungry, out on August 6, Ziegler explores the disconnect between resources and the people in need of them. He tours readers around indebted countries that have transformed their agricultural base into export industries, forfeiting the ability to feed themselves. Haiti, for instance, could thirty years ago grow enough rice to feed its people, but after lowering barriers to imported rice at the behest of the International Monetary Fund, it wrecked local rice production to the point that now it must spend 80 percent of its revenue on imported food.

Ziegler shows us how starvation in places like Haiti, Ethiopia, and India can be traced back in no small part to those titans of global commerce who insist that freedom of trade is essential, but freedom from hunger is not. As market solutions have been pushed as the cure-all for poverty and hunger, the world’s poor now swim in the same tank as predatory sharks: financial speculators who deliberately drive up the price of food to make exponential profits.

And high prices have created perverse markets. Colombia, for example, is a major producer of palm oil, and exports a lot of it to Europe for use in biodiesel. In recent years, the country has stepped up production to feed the world market, but back home, the palm-oil industry has brought about illegal land seizures, displacement, and violence by paramilitary groups in support of agribusiness.

Elsewhere in the world, agribusiness companies like South Korea’s Daewoo Logistics and the French conglomerate Vilgrain, sometimes backed by private equity and sovereign wealth funds, have started to acquire their own land in poor countries to grow food and biofuels, often for export. Sometimes these companies simply hold onto the land until they can resell it for a higher price—which can further diminish a country’s ability to feed itself.

At the front gate of one massive farm in West Africa, Ziegler describes his encounter with an employee of the foreign company that owns it. As Ziegler recounts, the company’s lease was tax-exempt for 99 years. When asked about this arrangement, the young technician became defensive:

“We don’t pay taxes? That’s not true! We employ young people from the villages. The Senegalese government collects taxes on their incomes.”

Ziegler’s outrage is hardly reserved for the mid-level employees of agribusiness, however. Throughout the book, he puts his disgust for the leaders of global commerce on full display for the world. Hunger, he says, is “in no way inevitable. Every child who starves to death is murdered.”

Still, there are two sides to Ziegler’s story, and the disdain he expresses for the World Trade Organization, the US government, and its two “hired guns”—the IMF and the World Bank—appears to be mutual. Having taken a prominent stand against genetically modified crops in food aid in 2002, he ran afoul not just of the US government but the usually benevolent World Food Program. A letter to Kofi Annan, which found its way to the public by way of the 2010-11 WikiLeaks dump, accused Ziegler of undermining efforts to deliver food to the very people he wished to support by stirring fears around GMO’s “without citing any scientific authorities, studies or reports.” The World Food Program demanded the Swiss Rapporteur be removed from his position. (With Annan’s backing, Ziegler stayed on another six years.)

Betting on Famine offers a series of poignant, if unnerving, vignettes about global agriculture collected from Ziegler’s years with the UN. The message is not always cohesive, yet one truth shines through: The biggest problem today is not a dearth of technology, but an overflow greed.