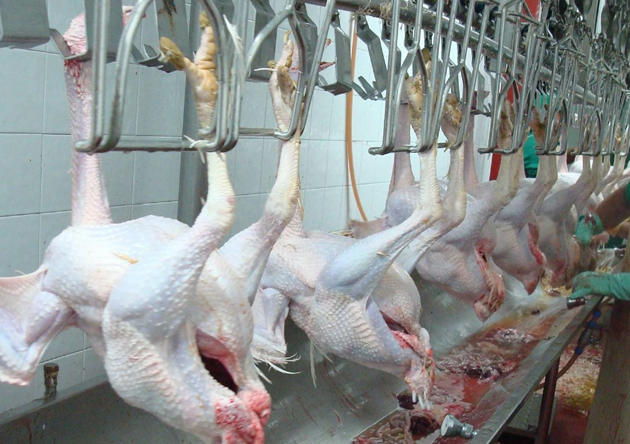 Evisceration of turkey carcasses at slaughterhouse <a href="http://www.flickr.com/photos/nottinghamvets/8495019956/in/photostream/">Nottingham Vet School</a>/Flickr

Last week, amid chaos over Syria and the ongoing budget fight in Washington, the General Accountability Office released a report about a project dear to the US Department of Agriculture: proposed new rules that would slash the number of federal inspectors that oversee poultry kill lines, and allow those lines to speed up.

The report didn’t make many waves in a stuffed-to-bursting news week—though the Washington Post‘s excellent Kimberly Kindy did her best to get the word out. But I hope the GAO’s critique breaks the Obama administration’s apparent zeal to push through the new inspection.

The fewer inspectors/faster line approach is the result of a long-running USDA pilot program called HACCP-based Inspection Models Project, or HIMP—one that, in a few select poultry plants, relies on antimicrobial sprays and company-paid inspections to maintain food safety, and deemphasizes the role of federal inspectors. The Bush Administration flirted with rolling out HIMP industry-wide in 2002, but pulled back. Evidently, Obama and his deregulatory-minded advisers couldn’t resist it. They claim it would save the poultry industry—dominated by Tyson, Pilgrim’s Pride (now mostly owned by JBS), Perdue, and Sanderson—more than $256 million per year by letting plants speed up production, and save the federal budget a piddling $30 million per year.

“The inspection category that had the highest error rate was for dressing defects such as feathers, lungs, oil glands, trachea and bile still on the carcass.”

The USDA has insisted that the novel inspection regime would improve the safety of the chicken and turkey cranked out by industrial-scale slaughterhouses, but it has never made a convincing case on this score, nor answered disturbing questions raised by Food and Water Watch’s analysis of documents it obtained under the Freedom of Information Act on the pilot plants. (I summarized FWW’s findings here. Spoiler: “Company employees miss many defects in poultry carcasses. The inspection category that had the highest error rate was ‘Other Consumer Protection 4’ for dressing defects such as feathers, lungs, oil glands, trachea and bile still on the carcass.”)

So what does the GAO report make of the USDA’s justification for the new rules? The USDA has not “thoroughly evaluated the performance of each of its pilot projects over time, even though the agency stated it would do so when it announced the pilot projects,” GAO complained. To justify its rollout, it used patchy and sometimes wildly outdated data. The USDA’s analysis of the program relied on “snapshots of data for two 2-year periods instead of data for the duration of the pilot project, which has been ongoing for more than a decade.” And in its 2012 cost-benefit analysis, the USDA relied on data from a 2001 survey of pilot poultry plants—and 20-plus-year-old data about economic conditions in the industry, the GAO states.

On the key question of whether the new system would actually improve food safety, as the USDA insists, the GAO says the department hasn’t been transparent on how it came to that conclusion. “We were unable to determine if the results of [the USDA’s] risk assessment accurately stated the public health benefits in the proposed rule because the risk assessment did not include sufficient detail about its methodology,” the report states.

The GAO also chastises the USDA for applying its flawed assessment of the chicken pilot plants to turkey plants, even though “there is no report evaluating the pilot project at young turkey plants.”

As for the workers who would have to conduct constant repetitive motions involving sharp knives and copious antimicrobial sprays, all under sped-up conditions, the GAO auditors weren’t charged with assessing that aspect of the new plan. The report does state that faster line speeds raise “concerns” about worker safety. But as the Southern Poverty Law Center showed in a damning recent report, neither the Occupational Safety and Health Administration (OSHA) nor the USDA has an explicit mandate to protect poultry workers from faster kill lines. This, even though at current speeds, poultry line workers “endure debilitating pain in their hands, gnarled fingers, chemical burns, and respiratory problems.” For a 2013 report, inspectors from the National Institute for Occupational Safety and Health visited a South Carolina poultry plant to check out worker safety conditions at current lines speeds. They found that “most employees reported multiple musculoskeletal symptoms.”

In short, the Obama administration has been pushing a deregulatory sop to a powerful industry based on a shoddy analysis—and one that largely omits the impact on workers of higher lines speeds. Indeed, of all the Obama administration’s disappointing moves on agriculture policy—the appointment of agrichemical industry types to key policy positions, the approval of dodgy GMO crops, the failed attempts to stand up to the meat and seed industries—the most craven of all may be the aggressive push to make these changes.

And while the USDA, which is tasked with ensuring the safety of meat products, is spearheading the effort, there’s never been any doubt about its origin: the White House. In January 2012, when the USDA first floated the proposal, the department noted in the Federal Register that “[t]his proposed rule is a result of the Agency’s 2011 regulatory review efforts conducted under Executive Order 13563 on Improving Regulation and Regulatory Review.” Executive Order 13563, issued by President Obama in January 2011, “orders government-wide review of the rules already on the books to remove outdated regulations that stifle job creation and make our economy less competitive,” as the president himself put it in a Wall Street Journal op-ed at the time.

Not surprisingly, Big Chicken vigorously supports the proposed changes. Meanwhile, last week, a coalition of 15 worker-justice groups presented the USDA with a petition demanding that the agency move in the opposite direction with regard to line speeds at poultry plants: to slow them down to protect workers, not speed them up to please industry. That seems doubtful, though—in a blog post last week, Al Almanza, administrator of the USDA Food Safety and Inspection Service, doubled down. “If finalized and implemented broadly, this new inspection system would enable FSIS to better fulfill our food safety mission,” he insisted.