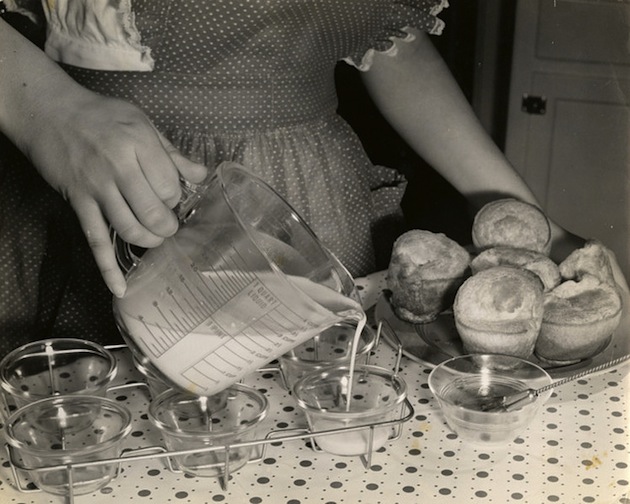 I was a rotten high school student, a shirker and smart-ass of the first rank. I even found myself purged from a typing class for bad behavior—an event I regret to this precise moment, since touch-typing is obviously a convenient skill for someone in my profession. Afterward, I had to choose another “elective.” Naturally, I seized upon home economics—in which, I hoped, I’d spend my time amusing girls with wisecracks and whipping up desserts from boxed mixes. If memory serves, that’s exactly how it played out—especially the bit about the just-add-water confections. Mmmm, instant cake.

In other words, I retained just as much from my home ec class as I did from my failed stint as a student of the keyboard: which is to say, nothing. Yet Ruth Graham’s recent Boston Globe essay “Bring back home ec! The case for a revival of the most retro class in school” strikes me as spot on. Graham isn’t talking about the home ec of my wayward ’80s youth, nor that of quaint stereotypes featuring “visions of future homemakers quietly whisking white sauce or stitching rickrack onto an apron.”

She means a revitalized, contemporary home economics for all genders, one capable of at least exposing youth to basic skills that so many adults (i.e., their parents) lack: “to shop intelligently, cook healthily, [and] manage money.” And I think such a reimagined home ec should move from the shadowy margins it now occupies—the field has been rebranded as “Family and Consumer Sciences,” Graham reports—and become mandatory for all high school kids, and—why not?—even elementary school ones.

I have witnessed firsthand the vexed state of basic cooking skills among the young. When I helped run the kitchen at Maverick Farms for seven years, I noticed that most of our interns couldn’t chop an onion or turn even just-picked produce into a reasonably good dish in a reasonable amount of time. And these were people motivated enough about food to intern at a small farm in rural North Carolina. If I had their cooking skills, I’d be tempted to resort to takeout often, just to save time.

It’s true that in my home ec class nearly a quarter century ago, we weren’t taught how to handle a knife or follow a simple recipe for a from-scratch dish. But home ec wasn’t always so vapid. Graham points to New York Times reporter Michael Moss’ great 2013 book Salt Sugar Fat, which contains a brief history of the home ec trade in US public schools.

The convenience food industry that’s so powerful and entrenched today was just taking root in the 1950s. And as it began to aggressively market its products to a growing US middle class, it faced “one real obstacle,” Moss writes: the “army of school teachers and federal outreach workers who insisted on promoting home-cooked meals, prepared the old fashioned way.”

Home ec teachers explicitly battled against the industry’s claims of convenience, Moss shows. In 1957, he writes, the American Home Economics Association conducted a demo pitting a commercial cake mix against a homemade batter, Moss reports. “As reported in the association’s journal, the homemade cake not only cost less and tasted better, it took only five minutes more to prepare, cook, and serve.” Plus the batter could be made in advance and stored, “for quick parceling out when a cake was needed.” Home-ec teachers also schooled their charges in frugal shopping, teaching them to “avoid buying things they didn’t need.”

If any single person could be said to be the founder of home economics, it is the formidable Ellen Swallow Richards, a Bostonian who was the first woman admitted to MIT. She served as the first president of the American Home Economics Association and was instrumental in coming up with the term “home economics,” officially adopted at a conference “for the betterment of the home” in 1899, just in time for the dawn of a scientifically minded century. Though it may now seem impossible, the discipline was originally rooted in progressive and even feminist thinking. The idea was to bring scientific rigor into the home, and to professionalize women’s domestic work, bringing dignity and efficiency to both.

To rebuff this cadre of holdouts within America’s schools, the food industry mobilized in two ways, Moss reports. First up was rolling out a school marmish figure called “Betty Crocker”—invented by the marketing department of the company that would become General Mills to extol the wholesomeness and ease of processed crap. The other move was a kind of leveraged buyout of the home ec trade itself: first by pouring money into grants and fellowships for the American Home Economics Association—$288,250 in 1957 alone, Moss writes—and then by “sponsoring candidates for the organization’s top leadership posts, candidates who would bring a decidedly pro-industrial view to home economics.”

And that is how home ec became the piece-of-instant-cake elective that I so idly enjoyed in the ’80s.

But imagine a home ec that taught basic skills like how to prepare a simple pureed vegetable soup, whip up a quick, easy, and much-cheaper-than-bottled salad dressing, or stock up a pantry with inexpensive bulk staples?

Food isn’t the only sphere in which millions of American adults—and the kids they are raising—find themselves swimming in a sea of ignorance, at the mercy of an industry peddling dubious wares. Another one is personal finance, as Helaine Olen shows in her indispensable 2012 book Pound Foolish. Over the past two decades, what Olen calls the “personal finance industrial complex” has fooled Americans into such follies as leveraging their futures with deceptively pricey credit cards, dumping hard-earned savings into that casino called the stock market, and buying houses they can’t afford and too often can’t hold on

In doing so, the industry has made personal finance into something that seems impossibly complex—what the hell is a variable annuity?—and then presented gurus who simplify it along lines convenient for itself. All of that is nonsense, Olen shows. After an interviewing her about what he sees as the “financial industry’s most basic dilemma,” that the “best advice fits on a 3×5 index card and is available for free at the library,” University of Chicago social scientist Harold Pollack actually scribbled out that card. Check it out—it’s mostly about saving as much as possible and avoiding the fees of Wall Street charlatans. If those simple principles could be drummed into the heads of high school students, imagine the misery that could be avoided. And what better forum for it than new-wave home ec? After all, the home ec curricula of yore included lessons on household finance.

A revived curriculum could be broader than just food and money, Graham notes. “Even sewing is gaining a certain relevance, as consumers grow increasingly wary of disposable garments made in unregulated factories overseas,” she writes. “An ambitious class could also include things like basic household plumbing or car repair.” I certainly could have used those skills (though auto mechanics have gotten so complex that I think “How to choose a reliable car you can afford—or get by without one altogether” might be a better theme.)

The main obstacle between where we are now and home ec nirvana is funding, as Graham notes. Public school systems are so strapped that they’re already slashing equally worthy classes like art, music, and PE. But producing generation upon generation of people who don’t know how to feed themselves healthily or manage their finances is generating massive, cascading societal costs—and the pennies we pinch by not revitalizing home ec seem like a classic false economy, much like those boxed cakes the food industry was already peddling by 1957.