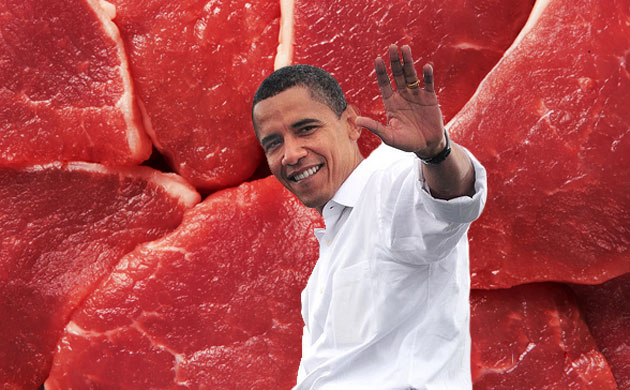 When Barack Obama won the presidency in November 2008, taking on the meat industry surely ranked somewhere behind managing the financial crisis and wrangling two wars on his list of priorities.

Still, he had explicitly promised to crack down on some of Big Meat’s excesses. In his campaign literature targeted at rural voters, he deplored “anticompetitive behavior” and “market consolidation” by big meatpackers, and vowed to “strengthen anti-monopoly laws” and “make sure that farm programs are helping family farmers, as opposed to large, vertically integrated corporate agribusiness.” He also insisted his administration would  “strictly monitor and regulate pollution” from factory-scale animal farms, backed by “fines for those who violate tough air and water quality standards.”

Five years and another election later, “how’s that hopey-changy thing working” (to quote Sarah Palin) when it comes to challenging the meat industry’s power? The Pew Commission on Industrial Farm Animal Production’s landmark report, released months before the presidential election in 2008, provides a good framework for examining Obama’s record. Led by a distinguished set of public-health, agriculture, and animal-welfare experts, the Pew Report delivered a blunt assessment of the health and environmental effects of factory meat production—and a set of policy recommendations for cleaning it up. And just last week, the Center for a Liveable Future at Johns Hopkins University (which worked with Pew on the original report) came out with an updated assessment of how things have gone over the past five years—a period that roughly coincides with Obama’s presidency.

Unfortunately, Big Meat continues to enjoy a rather friendly regulatory environment nearly a half-decade into Obama’s presidency, the report shows. Drawn (mostly) from CLF”s update, here are five ways the Obama Administration has kowtowed to the meat industry.

The GAO concluded that on factory farms, the EPA “does not have the information that it needs to effectively regulate these operations.”

1. Factory farms don’t have to register with the EPA. Remember the tough talk about how the administration would “strictly monitor and regulate pollution” from concentrated animal feedlot operations (CAFOs)? Turns out, if you run one of these gargantuan operations—which accumulate vast cesspools of manure that regularly pollute water and air—you’re under no obligation to inform the Environmental Protection Agency of your existence, which makes it hard to monitor and regulate your pollution. In a 2008 report, the Government Accountability Office concluded that, because of this information void, the EPA “does not have the information that it needs to effectively regulate these operations.”

Under pressure from a lawsuit by environmental groups back in 2010, Obama’s EPA proposed new rules that would have remedied the situation by requiring CAFOs to file basic information on their operations with the agency.  Then, in 2012, the EPA unceremoniously withdrew the proposed rules, CLF reports. So now we’re back to where we were in 2008. Meanwhile, new peer-reviewed research has found that that the closer you live to a large hog operation, the likelier you are to be infected with a dangerous antibacterial-resistant pathogen called methicillin-resistant Staphylococcus aureus, or (MRSA).

2) Factory farms are exempt from the most important pollution laws. MRSA isn’t the only threat faced by people who live near factory animal farms. As this 2011 paper by North Carolina researchers shows, the foul odors emitted by these operations likely cause a host of problems ranging from eye irritation to difficulty breathing. CAFOs concentrate animal waste and emit ammonia, particulate matter, hydrogen sulfide, and volatile organic compounds into the air.

In a craven move just before leaving office in early 2009, President George Bush exempted CAFOs from having to report hazardous air emissions under the Comprehensive Environmental Response, Compensation and Liability Act (CERCLA), also known as Superfund—an exemption that remains in place.

The Obama EPA has not taken back that gift to Big Meat. The holdup, as Tarah Heinzen, an attorney with the Environmental Integrity Project, explained to me, is that the EPA says it doesn’t have a reliable way to gauge CAFOs’ air emissions (not surprising, given the dearth of data the agency has on CAFOs). The EPA’s attempts to get the data necessary to regulate air emissions has been vexed—and the dysfunction dates to the Bush II administration. In an industry-funded collaboration beginning in 2005, the EPA conducted air-quality monitoring at 15 livestock confinements and 9 manure lagoons across the country. When the EPA finally released data from the study in 2011, 11 of those 15 operations exceeded exceeded federal reporting thresholds for ammonia emissions, according to an analysis of it by Environmental Integrity Project. But when the EPA finally released its own analysis of the data, its own Science Advisory Board (SAB) found the EPA’s methodologies to be woefully inadequate—and essentially sent the agency back to the drawing board.

And so, under Obama, the EPA’s effort to create a system for measuring exactly what enters the air from CAFOs—much less protecting communities from it—has stalled indefinitely, the report finds.

3) Big Meat has only gotten bigger, unchecked by antitrust action. Not long after taking office in 2009, President Obama announced a series of public hearings, bringing together farmers with antitrust officials from the Justice Department, to talk through anticompetitive practices in the meat industry. After years of nearly unchecked consolidation—big meat packers combining with and/or buying up smaller meat packers, concentrating market power—this seemed like a radical move. Meanwhile, the 2008 farm bill required USDA to come up with a set of policies, known collectively as the GIPSA rule, designed to level the playing field between livestock farmers and the big meatpackers, which dominate the industry with their contracts. The effort that began promisingly; “Small Farmers See Promise In Obama’s Plans,” a 2009 NPR report declared.

What has Obama’s challenge to the industry’s market power amounted five years into his presidency? “[N]ear-total collapse,” CLF laments. The DOJ hearings resulted in a 24-page report and little else. The Obama USDA ended up watering down its initially strong GIPSA rule proposal—only to see it essentially gutted by Congress, CLF reports. Meanwhile, “consolidation in the meat industry has continued unabated worldwide,” Pew finds.

4) CAFOs continue to generate antibiotic-resistant pathogens. There’s no more depressing section of the CLF update than the one on the meat industry’s reliance on routine antibiotic use. Back in 2008, the commission recommended that the federal government “phase out and then ban the nontherapeutic use of antimicrobials” in livestock production. The rational was simple: when you feed tightly confined animals daily doses for antibiotics, microbes quickly evolve resistance to those antibiotics. And some of those microbes—like salmonella and certain forms of E. coli—can cause severe damage to people.

Antibiotics should be reserved for cases when animals are actually sick, not used to stimulate their growth or to try to prevent them from getting sick, Pew concluded.

Five years later, CLF reports, evidence has accumulated linking routine farm antibiotic use to human disease—everything from potentially deadly MRSA to urinary-tract infections. This year, the Centers for Disease Control bluntly acknowledged the problem. The Obama Administration’s response to the threat? Amid much fanfare in 2012, the Food and Drug Administration rolled out a voluntary approach—one that, even if the industry chooses to follow it, will likely be inadequate, because it contains a massive loophole, CLF reports (more details here). As a result, “meaningful change” to Big Meat’s antibiotics fixation is “unlikely in the near future.”

5) Obama’s USDA is pushing to speed up poultry slaughterhouses, workers be damned. Working conditions in slaughterhouses are beyond the scope of the Pew Commission’s original report, but no list of Obama’s sellouts to Big Meat is complete without a mention of the US Department of Agriculture’s proposed new plans for inspecting poultry line. They’re essentially a privatizer’s dream: Slash the number of USDA inspectors on the kill line, saving the government some money; hand much of the responsibility for inspection to the poultry packers themselves; allow them to substitute random testing and plenty of antimicrobial spray for the onerous task of inspecting every bird, which means the kill line can speed up, thus saving the industry loads of money.

All of which sounds great, unless you’re a worker about to find that your already-hazardous job just got more dangerous; or you’re a chicken eater, because, according to a Food and Water Watch analysis of USDA data on its pilot program for the new system, the new system lets some pretty foul stuff through.

Worker and food-safety advocates have pushed back hard against the new rules, but the USDA appears to be sticking to its guns. The department is in the process of finalizing the new plan, The Washington Post reported Tuesday.