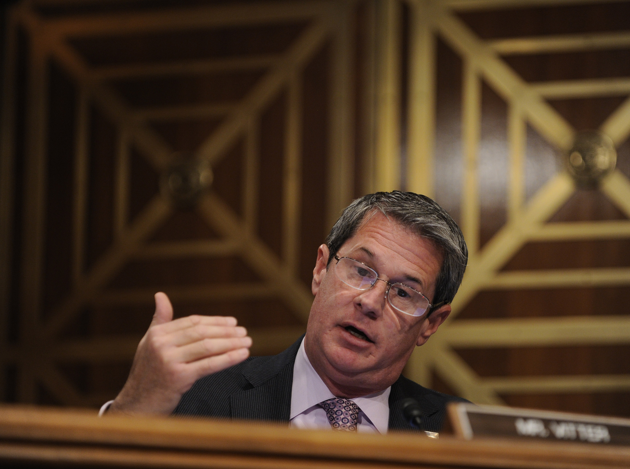 On Wednesday, Sen. David Vitter (R-La.) introduced a bill that would force recipients of food stamps to show a valid photo ID to buy food. Anti-hunger advocates say that because many poor people cannot afford to purchase government IDs, the requirement would make it harder for low-income Americans to eat.

Vitter says the bill is designed to cut down on fraud. “Using a photo ID is standard in many day-to-day transactions, he said upon introducing the bill. “My bill will restore some accountability to the program so it’s not ruined for people who use it appropriately.”

But it’s not that simple. Vitter’s bill would also prevent many Americans from using the nutrition aid they’re eligible for. “Many poor people do not have photo ID’s, and it costs money they do not have to get them,” Deborah Weinstein, executive director of the advocacy organization Coalition on Human Needs, told the Times-Picayune on Wednesday. “Senator Vitter’s proposal will be especially tough on elderly and poor people who do not have the documents needed to get their photo ID, and who will struggle even to get to the necessary offices. They will wind up going without food.”

This is just the latest assault in the long-running GOP war on the food stamp program, known as the Supplemental Nutrition Assistance Program (SNAP). Last year, Vitter drafted an amendment to the Senate farm bill—the five-year legislation that funds nutrition and agriculture programs—that would ban those convicted of certain violent crimes from ever getting food stamps. The amendment, which the Senate approved, would have “strongly racially discriminatory effects,” according to the non-partisan Center on Budget and Policy Priorities.

In 2013, House Republicans passed a version of the farm bill that would cut $40 billion from the food stamps program. The House farm bill also contains GOP-backed provisions that would impose new work requirements on food stamp recipients, and that would give states financial incentives to kick people out of the program.

The final version of the farm bill, which is a compromise between the Senate and the House versions, is reported to contain $9 billion in cuts to SNAP.