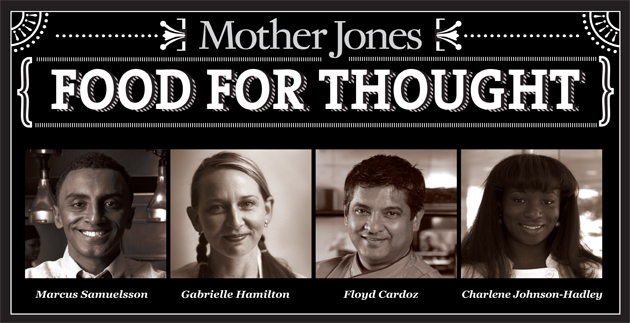 Last fall, I had the good fortune to attend the most dazzling culinary confab of my life.

Set at the dramatically beautiful Stone Barns Center for Food and Agriculture outside of New York City, the event included some of the globe’s most-decorated chefs: Spaniards Ferran Adrià and Joan Roca, France’s Michel Bras, Enrique Olvera of Mexico, Peru’s Gastón Acurio, and Brazil’s Alex Atala, along with US luminaries including Dan Barber, Daniel Patterson, and David Kinch. It also featured a mind-blowing discussion of plant breeding that has opened new vistas of reporting for me, the first stirrings of which are here and here.

But amid the glittering names, the provocative ideas, and the gorgeous food, an uncomfortable thought crossed my mind: Where were the women chefs? There were a handful, including New York City’s great April Bloomfield. And a good number of the plant breeders in attendance were women. But in terms of chefs, it was a bro-fest on the Hudson. Yet I could think of myriad women—Anita Lo, Alice Waters, Suzanne Goin, Traci Des Jardins, Gabrielle Hamilton, Amanda Cohen, Dominique Crenn, and more—who could have contributed significantly to the conversation. What was up?

“How come I’ve never been invited to one of these things? Is it that I have nothing to offer? … I want to be invited, and I want to have the opportunity to f-ing turn it down.” -Chef Gabrielle Hamilton

So I dug into the topic, and found that—like other high-prestige fields including investment banking and science—men, and particularly white men, continue to dominate the chef trade. (Story here.) But I also found that things are changing—women and people of color are claiming a place for themselves at the exclusive table of culinary prestige.

So my Mother Jones overlords and I are extremely excited to be hosting a panel discussion in New York City on March 3, where we’ll be assembling a few of the pioneers who are pushing this long-overdue change. The panel will convene at Ginny’s Supper Club, upstairs from Marcus Samuelsson’s instant-classic Harlem restaurant Red Rooster. It will include Marcus himself, a much-decorated chef and author of the highly praised memoir Yes, Chef; Gabrielle Hamilton, chef/proprietor of the East Village gem Prune and author of her own celebrated memoir, Blood, Bones, and Butter; Floyd Cardoz, chef at North End Grill in Battery Park City, former chef at the late and beloved new-Indian restaurant Tabla, and author of One Spice, Two Spice; and Charlene Johnson-Hadley, who worked her way up through Samuelsson’s Red Rooster kitchen and is now executive chef at his Lincoln Center outpost American Table Bar and Cafe.

I can promise a great conversation. Marcus rocked the previous NYC panel we staged back in 2012. As for Hamilton, despite her expert knife skills, she’s not one to mince words onstage. At a recent panel, she had this to say about big culinary confabs and their tendency to exclude women: “How come I’ve never been invited to one of these things? Is it that I have nothing to offer? … I want to be invited, and I want to have the opportunity to f-ing turn it down.”

Unlike most panels, ours will include only one white dude: me. And I hope to see you there. Space at this event is limited, and tickets are on sale now—details here.