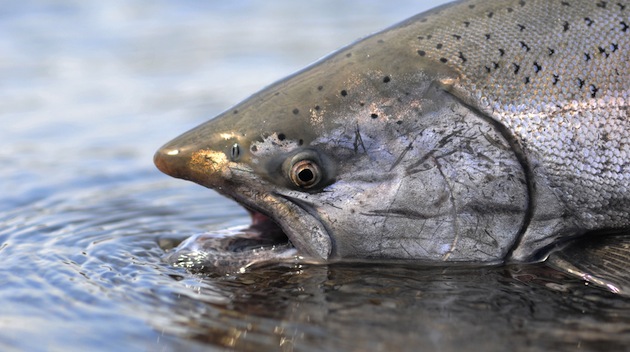 Like college sophomores philosophizing over bong hits late at night, the California North Coast’s booming marijuana farms languish in the smoky haze of paradox. On the one hand, they’re hyperregulated—that is to say, illegal (with the exception of farms licensed to grow for the medical trade). On the other hand, being illegal, they’re essentially not regulated at all, as my colleague Josh Harkinson showed in a recent piece.

A rogue grower tending a plot on a California state park isn’t worried about running afoul of state fish-and-wildlife authorities for illegally diverting a stream for irrigation. Instead, he’s scrambling to avoid being busted on federal drug charges—and will thus grab any resource necessary to churn out a fast and plentiful pot harvest.

And with California’s drought settling in for a long, hot summer, that’s bad news for ecosystems that rely on the state’s increasingly scarce surface waters—including the once-prolific Northern California salmon run. A recent article in the Mendocino County Press Democrat shows just how dire things have gotten in the state’s pot-farm-heavy “Emerald Triangle” (Mendocino, Humboldt, and Trinity counties).

A pot plant consumes six gallons of water every day.

The piece looks at a forthcoming study from the California Fish and Wildlife Department on three key Emerald Triangle watersheds. Using satellite imagery, the researchers found that pot cultivation had skyrocketed in the areas since 2009, rising between 75 percent and 100 percent. The three watersheds contain an average of 30,000 pot plants each, they found. (Here’s a nifty map). And they’re thirsty. According to the Press Democrat, “Researchers estimate each plant consumes 6 gallons of water a day. At that rate, the plants were siphoning off 180,000 gallons of water per day in each watershed—all together more than 160 Olympic-sized swimming pools over the average 150-day growing cycle for outdoor plants.”

Mind you, that’s just in the three watersheds the researchers looked at. According to the Press Democrat, there are more than 1 million pot plants in Mendocino alone—not counting legal ones licensed for the medical market.

Already, the region’s salmon tributaries are under severe pressure—as many as 24 went dry last year, the Press Democrat reports. And even without the drought, there just isn’t enough water available to keep the pot crop humming and the salmon moving along, state Fish and Wildlife Senior Environmental Scientist Scott Bauer told the paper.

And water diversions aren’t the only vice indulged in by large-scale pot growers. Last year, the North Coast Regional Water Quality Control Board listed a few others, including land-grading and dam-making that leads to stream-clogging erosion; wanton use of pesticides—most egregiously, wildlife-killing rat poison; and “discarding of trash and haphazard management of human waste.”

Of course, like any other crop, pot could be grown in ecologically responsible ways. For example, “if growers collected all their water during the rainy season and stored it in permitted tanks or ponds—like many other farmers—marijuana’s water consumption would not be such an issue,” one environmental watchdog told the Press Democrat. And in dry years like this one, at least some pot fields could be fallowed, leaving more water for wildlife.

But since pot farming is illegal, growers have little incentive to act as land stewards. Indeed, they tend to sneak onto—and trash—state and federal parkland to plant their illicit crop. If pot farms were legal, growers could be held accountable for their environmental footprint. As one activist told Harkinson for his Mother Jones story, “It is not the growers who are a disease. They are just a symptom. The real disease is the failed drug war.”

Of course, legal agriculture isn’t a paragon of environmental responsibility, and criminal pot farms aren’t the only operations wreaking water havoc in California. As I wrote recently, the state’s ag-heavy Central Valley is currently in the midst of sucking dry its fossil water resources, driven largely by a boom in tree nut production and a near-complete lack of regulation of groundwater pumping. The situation has gotten so dire that even big farming interests, which have for decades fought back any pumping regulations, are openly considering the possible need for smarter water rules.

But that debate can’t even begin among pot growers until they can no longer hide in the shadows cast by the drug war.