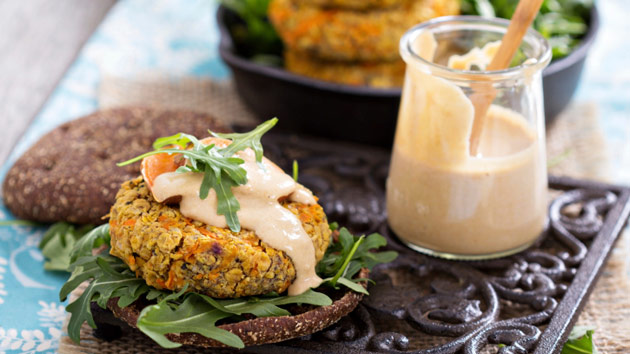 Treating yourself to vegan burgers with sweet potato and chickpeas isn't just a delicious indulgence; it could help save the planet.Thinkstock

The meat industry is one of the top contributors to climate change, directly and indirectly producing about 14.5 percent of the world’s anthropogenic greenhouse gas emissions, and global meat consumption is on the rise. People generally like eating meat—when poor people start making more money, they almost invariably start buying more meat. As the population grows and eats more animal products, the consequences for climate change, pollution, and land use could be catastrophic.

Attempts to reduce meat consumption usually focus on baby steps—Meatless Monday and “vegan before 6,” passable fake chicken, and in vitro burgers. If the world is going to eat less meat, it’s going to have to be coaxed and cajoled into doing it, according to conventional wisdom.

But what if the convincing were the easy part? Suppose everyone in the world voluntarily stopped eating meat, en masse. I know it’s not actually going to happen. But the best-case scenario from a climate perspective would be if all 7 billion of us woke up one day and realized that PETA was right all along. If this collective change of spirit came to pass, like Peter Singer‘s dearest fantasy come true, what would the ramifications be?

At least one research team has run the numbers on what global veganism would mean for the planet. In 2009 researchers from the Netherlands Environmental Assessment Agency published their projections of the greenhouse gas consequences if humanity came to eat less meat, no meat, or no animal products at all. The researchers predicted that universal veganism would reduce agriculture-related carbon emissions by 17 percent, methane emissions by 24 percent, and nitrous oxide emissions by 21 percent by 2050. Universal vegetarianism would result in similarly impressive reductions in greenhouse gas emissions. What’s more, the Dutch researchers found that worldwide vegetarianism or veganism would achieve these gains at a much lower cost than a purely energy-focused intervention involving carbon taxes and renewable energy technology. The upshot: Universal eschewal of meat wouldn’t single-handedly stave off global warming, but it would go a long way toward mitigating climate change.

The Dutch researchers didn’t take into account what else might happen if everyone gave up meat. “In this scenario study we have ignored possible socio-economic implications such as the effect of health changes on GDP and population numbers,” wrote Elke Stehfest and her colleagues. “We have not analyzed the agro-economic consequences of the dietary changes and its implications; such consequences might not only involve transition costs, but also impacts on land prices. The costs that are associated with this transition might obviously offset some of the gains discussed here.”

People would band together to form communes, squat on the former pasture land, and adopt a lifestyle of free love.

Indeed. If the world actually did collectively go vegetarian or vegan over the course of a decade or two, it’s reasonable to think the economy would tank. According to “Livestock’s Long Shadow,” the influential 2006 U.N. report about meat’s devastating environmental effects, livestock production accounts for 1.4 percent of the world’s total GDP. The production and sale of animal products account for 1.3 billion people’s jobs, and 987 million of those people are poor. If demand for meat were to disappear overnight, those people’s livelihoods would disappear, and they would have to find new ways of making money. Now, some of them—like the industrial farmers who grow the corn that currently goes to feed animals on factory farms—would be in a position to adapt by shifting to in-demand plant-based food production. Others, namely the “huge number of people involved in livestock for lack of an alternative, particularly in Africa and Asia,” would probably be out of luck. (Things would be better for the global poor involved in the livestock trade if everyone continued to consume other animal products, such as eggs, milk, and wool, than if everyone decided to go vegan.) As the economy adjusted to the sudden lack of demand for meat products, we would expect to see widespread suffering and social unrest.

A second major ramification of global vegetarianism would be expanses of new land available. Currently, grazing land for ruminants—cows and their kin—accounts for a staggering 26 percent of the world’s ice-free land surface. The Dutch scientists predict that 2.7 billion hectares (about 10.4 million square miles) of that grazing land would be freed up by global vegetarianism, along with 100 million hectares (about 386,000 square miles) of land that’s currently used to grow crops for livestock. Not all of this land would be suitable for humans, but surely it stands to reason that this sudden influx of new territory would make land much cheaper on the whole.

A third major ramification of global vegetarianism would be that the risk of antibiotic-resistant infections would plummet. Currently, the routine use of antibiotics in animal farming to promote weight gain and prevent illness in unsanitary conditions is a major contributor to antibiotic resistance. Last year the Centers for Disease Control and Prevention announced that at least 2 million Americans fall ill from antibiotic-resistant pathogens every year and declared that “much of antibiotic use in animals is unnecessary and inappropriate and makes everyone less safe.” The overprescription of antibiotics for humans plays a big role in antibiotic resistance, but eradicating the factory farms from which many antibiotic-resistant bacteria emerge would make it more likely that we could continue to count on antibiotics to cure serious illnesses. (For a sense of what a “post-antibiotics future” would look like, read Maryn McKenna’s amazing article on the topic for Medium and her story about a possible solution for chicken farming in Slate.)

So what would be the result, in an all-vegetarian world, of the combination of widespread unemployment and economic disruption, millions of square miles of available land, and a lowered risk of antibiotic-resistant gonorrhea? I can only conclude that people would band together to form communes in order to escape capitalism’s ruthlessness, squat on the former pasture land, and adopt a lifestyle of free love.

But if the result of a worldwide shift to a plant-based diet sounds like a right-winger’s worst nightmare, it’s worth pointing out that continuing to eat as much meat as we currently do promises to result in a left-winger’s worst nightmare: In a world of untrammeled global warming, where disastrous weather events are routine, global conflicts will increase, only the wealthy will thrive, and the poor will suffer.

Let’s try a middle path. We’re not all going to become vegetarians, but most of us can stop giving our money to factory farms—the biggest and worst offenders, from a pollution and public health perspective. We can eat less meat than we currently do, especially meat from methane-releasing ruminants (cattle, sheep, goats, etc.). Just because a sudden global conversion to vegetarianism would have jarring effects doesn’t mean we can’t gradually reduce our consumption of meat, giving the market time to adjust. We not only can; we must. After all, with the world’s population slated to grow to 9 billion by 2050, we’ll be needing to take some of the 25 percent of the world’s land area back from the cows.