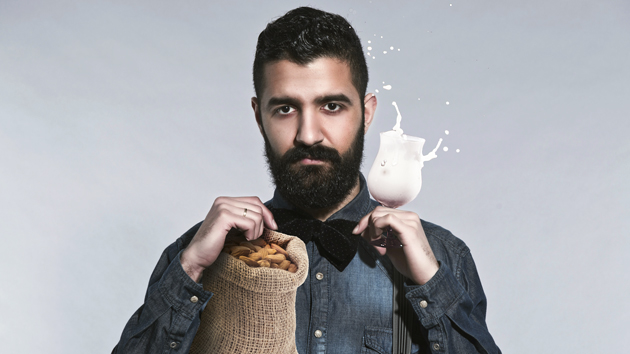 When I penned my little opus about almond milk last week, I really didn’t intend to insult anyone’s intelligence, provocative headline aside. What I really wanted to do was encourage people to think about what they’re buying when they buy this hot-selling product. My editors chose the title and I went along, because they know more than me about what makes people click. And people clicked! I’m pretty sure that “Lay Off the Almond Milk, You Ignorant Hipsters” is my most-read piece ever at Mother Jones.

It takes a gallon of water to grow a single almond. How does an almond’s water footprint stack up to other foods’?

Reactions mostly hovered in a range between mild annoyance and blind rage. One guy dropped by the Facebook page of the farm I helped found, Maverick Farms, to inform me that he planned to keep drinking almond milk—and spilling it, even. To drive his point home, he even looked up the farm’s phone number and repeated his pledge on the answering machine. Thanks for the update!

The oddest response came from Gawker’s Hamilton Nolan, who took the opportunity to school me in the art of the “food troll”:

Still not convinced? Nolan adds the coup de grace: “If I puked up almond milk it probably wouldn’t even taste that bad relative to other kinds of puke.”

On a protein basis, almond milk looks like a disaster: it takes 23 gallons of water to produce a gram of almond milk protein.

Right. Meanwhile, several people thundered that since I dare question the value of almond milk, I must be a tool for Big Dairy. “Were you paid off by the Dairy Farmers of America to write that piece?” one wag wondered on Twitter, adding, helpfully ” PS I’m no hipster and I love my Almond Milk!”

Actually, my piece did not purport to judge almond milk against the standards of dairy milk and find it wanting. “I get why people are switching away from dairy milk, I wrote, since “industrial-scale dairy production is a pretty nasty business.” I did cop to drinking a bit of kefir, a fermented milk product. But my intention wasn’t to promote Big Dairy, but just to point out that almond milk is nutritionally pretty vapid compared to other products. An eight-ounce serving of Helios brand organic kefir contains 16 grams of protein, vs. 1 gram per serving in most almond milk brands. That’s a remarkable difference. But of course, people consume things for all sorts of good reasons, not just protein content.

Even though kefir costs more than $4 per quart vs. about $2 for almond milk, it starts to look like quite a bargain on a protein basis.

Almond milk’s dilute nature lies at the heart of the critique made by Slate’s Maria Dolan, the most thoughtful one I’ve seen of the piece. My basic complaint against almond milk is that it’s a watered-down product: you take something that’s quite nutrient-dense and deluge it with water, essentially selling people a few almonds and a lot of water.

I’m thinking about it in the wrong way, counters Dolan. “Is drowning them in water to create almond milk really a bad thing from an environmental perspective?” she asks. “Just as making meat a garnish, not the centerpiece of your meal, thins the environmental impact of eating beef, so consuming almonds sparingly—by diluting them into milk, for instance—reduces their ecological impact.”

But I’m not sure that almond milk works to moderate people’s almond consumption. California’s rapid, and ecologically troubling, expansion of almond production is largely driven by booming exports, mainly to Asia. But US consumption is booming too. According to the Almond Board of California, the US market consumed 394 million pounds of almonds from the 2007-’08 harvest and 605 million pounds in 2012-’13. That’s a 50 percent jump in five years. And as I noted in my post, almond milk sales are surging at an even faster clip. It seems to me that the almond milk craze, whatever else it is, reflects a clever food industry strategy to sell yet more almonds, not a way for consumers to reduce their environmental impact.

The Almond Board also reports that California now provides 84 percent of the globe’s almonds. Given the state’s severe water constraints, and that current levels of production already require 60 percent of managed US honeybees for pollination, often to disastrous effect, we may all have to ease up—not just on the almond milk, but also on almonds themselves. Hell, even ignorant hipsters like me love almonds.