Over the past decade, the number of farmers markets nationwide has approximately doubled, and the community-supported agriculture model of farming, where people buy shares in the harvest of a nearby farms, has probably grown even faster. Has this explosion of local produce consumption improved Americans’ diets? A couple of new studies paint a disturbing picture.

The first one, from a team that includes the eminent Harvard pubic health researcher Walter Willett, looked at dietary habits reported by more than 29,000 adults through the National Health and Nutrition Examination Survey (NHANES) from 1999 through 2010. The more fruits (excluding juice), vegetables (excluding potatoes), fish, whole grains, nuts, and legumes a respondent reported, the higher their score. Meanwhile, foods like sugar-sweetened beverages, meat, and added salt led to lower scores. As for alcohol, in a nod to the benefits of some-but-not-too-much consumption, moderate drinkers drew high scores, heavy drinkers scored low, and nondrinkers scored neutral.

Overall, the report delivered good news. The bottom line of the below chart reflects a steady but moderate improvement in diets between 1999 and 2010. 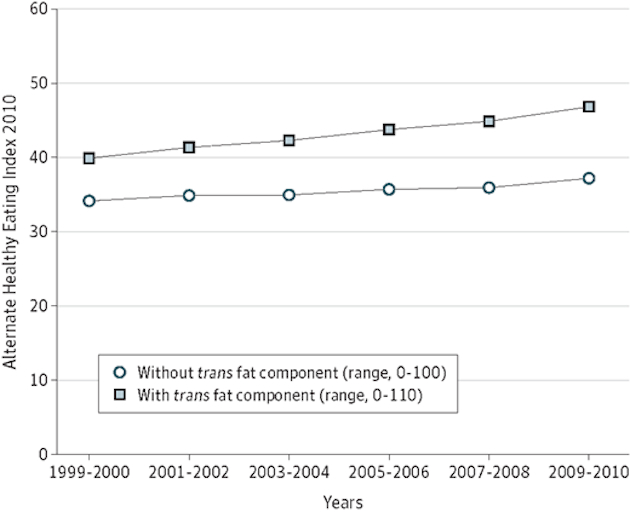 From “Trends in Dietary Quality Among Adults in the United States, 1999 Through 2010,” by Willett et al.

This next chart shows that we’re eating modestly more fruit, vegetables, and whole grains, and less meat and sugary drinks (lower consumption of the latter two corresponds to higher scores). For me, it’s tempting to think that the explosion of farmers markets has helped boost fruit and veg consumption. I’d also like to think that they help steer consumers away from routine consumption of cheap feedlot meat in favor of less-frequent consumption of more-expensive (and nutritious) pastured meat, sales of which are rising fast even as overall meat consumption declines. 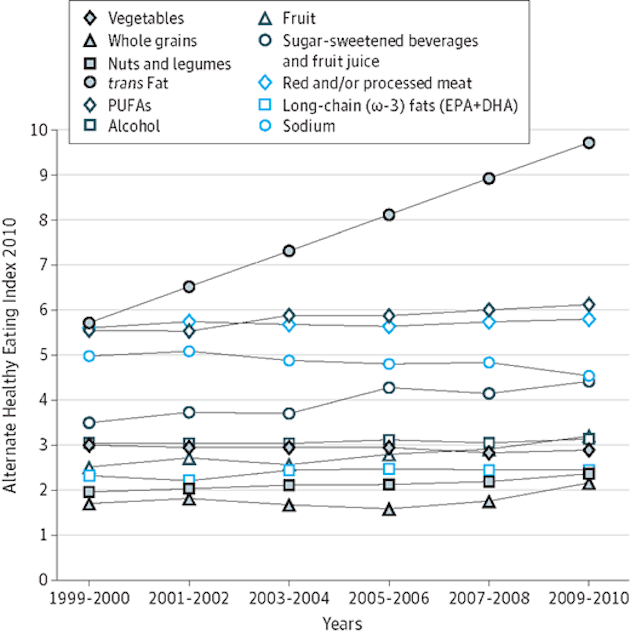 From “Trends in Dietary Quality Among Adults in the United States, 1999 Through 2010,” by Willett, et al.

Now, the researchers hasten to point out that despite the upswing, “overall dietary quality remains poor”—that is, the US diet is getting better, but it still pretty much sucks. But the real bad news is that people with high socioeconomic status (“SES,” measured as a combination of education level and income) drew much higher scores than people with low, and the gap increased over the course of the decade. And while the study found racial differences in dietary choices—non-Hispanic blacks made less-healthy choices than whites—they vanished when the researchers adjusted results for socioeconomic status. That is to say, well-to-do black people made roughly the same choices as well-to-do white people. 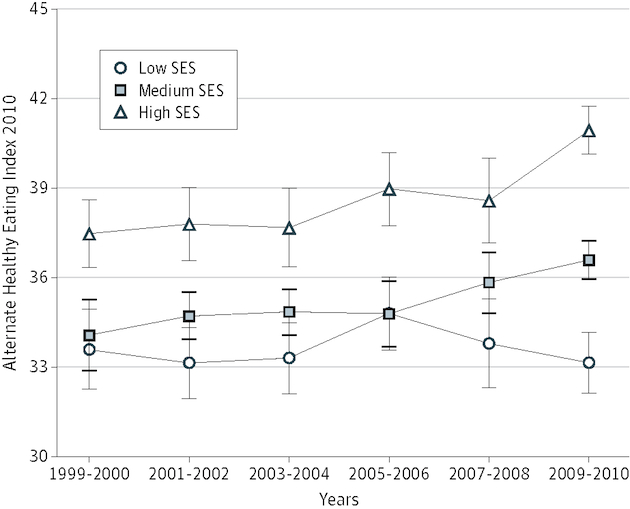 From “Trends in Dietary Quality Among Adults in the United States, 1999 Through 2010,” by Willett et al.

So the rich have not only gotten richer over the past decade—a phenomenon documented in the French economist Thomas Picketty’s recent bestseller Capital in the 21st Century, and also in Mother Jones‘ famous inequality charts—but they’ve also managed to improve their chances of living a healthy life by making better dietary choices. Good for them. But it’s worth analyzing why poor people don’t eat better. The traditional explanation is moral failure: The poor eat worse because they make poor choices. The reality is more complicated.

First of all, incomes have stagnated. Overall real median incomes today stand at 1989 levels, as this September US Federal Reserve report shows. And real median incomes declined 5 percent between 2010 and 2013, the report shows, even as income levels at the top expanded. That means that the “recovery” of the past three years hasn’t felt like much of one for millions of families.

Meanwhile, the portion of families whose income levels are so low that they can’t afford a steady supply of food spiked during the Great Recession, and remains stubbornly high, a new report from the US Department of Agriculture shows. The USDA defines “food insecurity” as “limited or uncertain availability of nutritionally adequate and safe foods or limited or uncertain ability to acquire acceptable foods in socially acceptable ways.” And it defines households with “very low” food insecurity as ones in which “one or more people were hungry at times during the year because they could not afford enough food.”

By those definitions, 14.3 percent of US households were food insecure in 2013, the most recent year for data, and 5.6 percent had “very low” food security. As for kids, 1 in 10 US households includes children who face food insecurity. Here’s a chart showing an overall upward trend since 2004.

According to the USDA, food-secure households spent 30 percent more on food than their food-insecure peers in 2013, and that includes expenditures from the Supplemental Nutrition Assistance Program (SNAP), formerly known as food stamps. It’s hard to think about making “healthy choices,” when the need to avoid hunger becomes urgent. On a per-calorie basis, junk food is still much cheaper than the healthy stuff that’s highly valued in the Harvard study. People don’t eat more food when they gain income, but they do tend to pay up for better food.

All of which underscores my long-held suspicion that we can’t reform the food system along more healthy lines until we reform the economic system—that is, create one that pays decent wages. In the end, the alternative food movement that has given us a large and growing base of farmers markets won’t be enough. The real driver of dietary change might turn out to be the burgeoning living wage movement—lately, embodied in the push by fast-food workers to raise their poverty-level incomes.