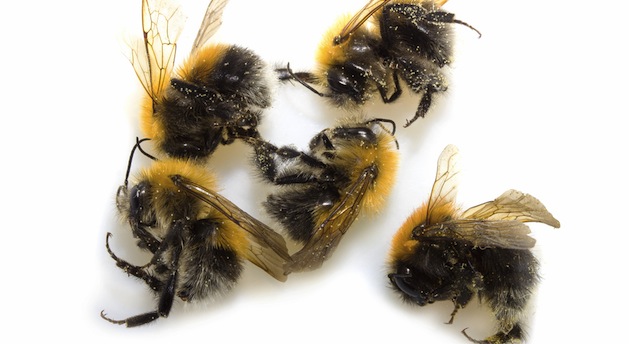 Was it all for nought? Note: bumblebees, pictured here, have also been shown to be harmed by neonics. <a href="http://flickr.com/link-to-source-image">KZWW</a>/Shutterstock

So, there’s this widely used class of pesticides known as neonicotinoids, marketed by chemical giants Bayer and Syngenta, that have emerged as a prime suspect in honeybee collapse, and may also be harming birds and water-borne critters. But at least they provide benefits to farmers, right?

Well, not soybean farmers, according to a blunt economic assessment released Thursday by the Environmental Protection Agency (PDF). Conclusion: “There are no clear or consistent economic benefits of neonicotinoid seed treatments in soybeans.”

The report goes on: “This analysis provides evidence that US soybean growers derive limited to no benefit from neonicotinoid seed treatments in most instances.”

Hmmm. But at least they’re better for farmers than no pesticide at all?

Nope: “Published data indicate that most usage of neonicotinoid seed treatments does not protect soybean yield any better than doing no pest control.”

One poll found that 45 percent of respondents reported finding non-treated seeds “difficult to obtain” or “not available.”

The EPA notes that in recent years, US farmers have been planting on average 76 million acres of soybeans each season. Of those acres, an average 31 percent are planted in seeds treated with neonics—that is, farmers buy treated seeds, which suffuse the soybean plants with the chemical as they grow. So that’s about 24 million acres of neonic-treated seeds—an area equal in size to the state of Indiana. Why would farmers pay up for a seed treatment that doesn’t do them any good, yet may be doing considerable harm to pollinators and birds? The EPA report has insights: “data from researchers and extension experts … indicate that some growers currently have some difficulty obtaining untreated seed.” The report points to one small poll that found 45 percent of respondents reported finding non-treated seeds “difficult to obtain” or “not available.”

Only one US crop is planted more abundantly than soybeans: corn, which typically covers around 90 million acres. According to Purdue entomologist Christian Krupke, “virtually all” of it is from neonic-treated seeds. That’s a land mass just 10 percent smaller than California. You have to wonder what bang those farmers are getting for their buck. I have a query into the EPA to see whether it has plans to conduct a similar assessment for corn. Meanwhile, this March 2014 Center for Food Safety research report, which was reviewed by Krupke and Jonathan Lundgren, a research entomologist at the US Department of Agriculture, found that the bee-killing pesticides offer at best limited benefits to corn farmers, too.