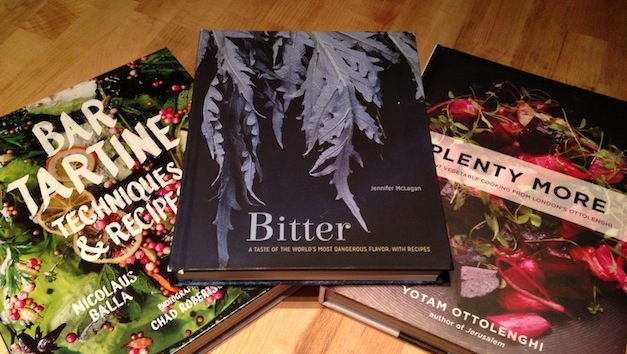 Another year, another spate of brilliant cookbooks. Here are the ones that made the biggest impression on me, in no particular order. 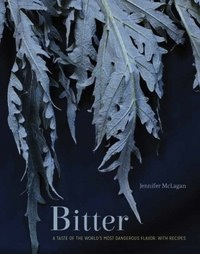 Bitter: A Taste of the World’s Most Dangerous Flavor, with Recipes, by Jennifer McLagan. In 2005, nearly a decade before “bone broth” emerged as a craze, McLagan came out with Bones, a delicious defense of a culinary resource people normally discard. Three years later, when people like me were still mostly shunning the lard jar, she produced the equally excellent Fat, which she called an “appreciation of the misunderstood ingredient.” McLagan, perhaps the most idiosyncratic and underrated cookbook author of our time, has now trained her powers on the stuff that makes you grimace the first time it hits your palate: radicchio, dandelion greens, hops, brassicas, chicory, citrus zest, coffee, etc. “Without bitterness we lose a way to balance sweetness,” she instructs. “Food without bitterness lacks depth and complexity.” Bitter brims with luminous mini-essays on the science and philosophy of taste, and delivers dozens of straight-ahead recipes that teach us to tame and celebrate the most challenging of the five basic flavors. 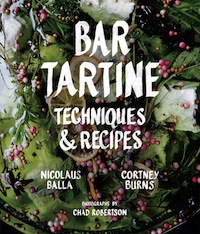 Bar Tartine: Techniques & Recipes, by Nick Balla and Cortney Burns. Based on a single meal several years ago, I’ve always assumed San Francisco’s Bar Tartine—sister to the justly venerated Tartine Bakery—specialized in simple bistro food. So I wasn’t overly excited when this substantial, beautifully produced tome arrived. But rather than deliver yet more versions of steak frites or coq au vin, the book reads like a manifesto written by radical gourmet homesteaders—one of the weirdest and most compelling cookbooks I’ve picked up in years. I got lost in the rabbit warrens of the opening “projects kitchen” section, where the authors lay out in detail all the stuff they make from scratch. “Our dairy program began humbly—with yogurt, sour cream, and kefir—and evolved to include all the products we currently use: blue cheese, pepper Jack, gouda, triple creams, feta, and fresh cheeses such as mozzarella, goat cheese, and farmers cheese,” the authors declare. Whoa. Ever wondered how to make your own kefir butter? Balla and Burns have you covered. I had never heard of “black garlic” before. Turns out, “holding garlic at 130 F for two to three weeks renders the cloves as black as tar.” Is that a good thing? “All of the characteristic sharpness disappears and is replaced with a molasses-like sweetness and an aroma reminiscent of licorice.” Then there’s the spice mixes. Forget, say, homemade curry powder. Think “charred eggplant spice,” a powder that “tastes like the pure flavor of earth and smoke” (other elements: charred, dehydrated chile peppers, huitlachoche—a corn fungus—and green onions.) Surprisingly simple (but never obvious) recipes follow the opening section’s wild innovations. I predict this book will be seducing and flummoxing me for years. Also, I’ve got to get myself back to Bar Tartine. 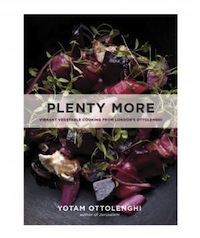 Plenty More: Vibrant Vegetable Cooking from London’s Ottolenghi, by Yotam Ottolenghi. Have we reached peak Ottolenghi? That was my question when I cracked the latest from the ubiquitous London chef, whose classics Plenty and Jerusalem seem to grace the shelves of most everyone I know, and won a spot in my 2012 best-of list. Known for his colorful, vibrant, vegetable-centered Mediterranean fare, the London-based, Israeli-born chef has been profiled in The New Yorker and interviewed on every foodie podcast. Does he have anything more to say? Hell, yes. Plenty More ventures farther afield from the author’s native Mediterranean region than his other works, copping techniques and ingredients from Thailand, Iran, India, and more. It draws you in with the delectable photography, and keeps you hooked with irresistible combinations: oranges and dates; beets with avocado and peas; leeks with goat cheese and currants; and so on. Ottolenghi isn’t a vegetarian, but he’s a wizard of vegetables, and a master at conjuring up hearty meals by combining them with grains and legumes.

Great gift for: Anyone who thinks vegetarian food is boring; anyone who likes to cook and eat.
Killer dish: Pea and mint croquettes.
Dish I’m dying to try: Fried umpa (an Indian semolina porridge) with poached eggs

• Despite the ongoing gluten-free fad, bread is having its day, as are books on baking. No home baker will want to miss In Search of the Perfect Loaf, in which the food politics writer and editor Sam Fromartz visits the epicenters of the global baking renaissance—Paris, Berlin, San Francisco, etc.—talking to its main characters and committing an epic and appealing nerd-out (with recipes) in service of home-cooked leavened dough. In Josey Baker Bread, San Francisco’s most celebrated young baker (yes, his name and vocation are identical) shows us how the pros do it.

• San Francisco’s The Slanted Door is a fancy restaurant that applies Vietnamese techniques and condiments to Northern California’s bounty. The Slanted Door, by chef-owner Charles Phan, is a surprisingly unfussy guide to working the restaurant’s magic at home.

• For the drinkers on your list, American Spirit is a spirited guide to what author James Rodewald calls the nascent “craft distilling revolution.” At the center of Rodwald’s book is a scandal. Because of loose labeling laws, most of the “artisanal” liquor on the market involves clever businesspeople “rebottling something that had been made at a larger distiller and calling it their own.” Rodewald profiles the (still relatively few) mavericks who actually are producing their own hooch—and teases out the considerable challenges of making great whiskey and other spirits on a small scale in an industry dominated by liquor giants and false marketing.

• After reading Rodewald, you’ll want to sip something stiff. Death & Co.—a sumptuous cocktail manual from the instant-legend East Village speakeasy of the same name—delivers dozens upon dozens of ideas for taking the edge off in high style. I can’t imagine a more comprehensive snapshot of the mixology craze.