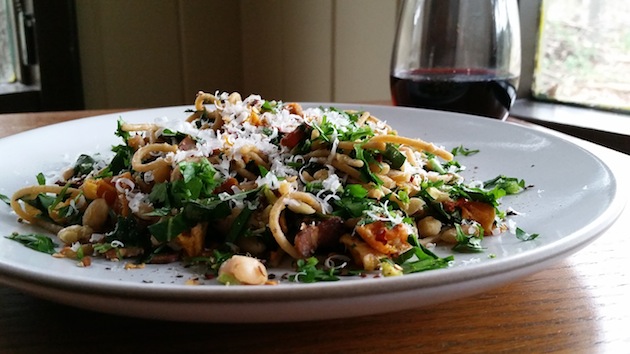 Pasta makes a great showcase for a season’s bounty—and not just in spring, despite the famed dish spaghetti primavera. I recently found myself in possession of some excellent butternut squash and collard greens from Austin’s Boggy Creek Farm, as well as gorgeous bacon from the throwback butcher shop Salt and Time. So, sweet (squash), pungent (collards), smoky/umami (bacon): elements of a great dish. To round it out, I decided to add white beans to the mix, using a method I recently picked up from the Los Angeles Times‘ Russ Parsons: Without any soaking, you cook the beans in a covered pot in an oven heated to 350 degrees F. Within two hours, I had perfectly tender, flavorful beans to bolster my pasta. (You can also just open a can, of course.) Grate a little Parmesan cheese and open a bottle of sturdy red wine, and you’ve got a dinner satisfying enough to overwhelm the winter blues.

Vegetarians can forgo the bacon and cook the collard greens in olive oil along with a rehydrated and chopped-up chipotle pepper, maintaining the smoke while adding a blast of heat.

Preheat the oven to 400 degrees F. Dump the squash cubes onto a baking sheet and give them a few glugs of olive oil, a good pinch of salt, and a lashing of black pepper. Using your hands, toss them to coat them evenly with oil, and then arrange the cubes in a single layer. Bake them, turning once or twice, until they are tender and beginning to brown, about 40 minutes or so.

Meanwhile, put a heavy-bottomed skillet over medium heat and add the bacon. Cook it, stirring often, until it is brown and crisp. Remove the bacon from the skillet with a slotted soon, setting it aside. With the bacon fat still in the skillet, add the garlic. Cook it for a few seconds, stirring often, and add the chopped collards. Using a spatula or tongs, toss them well, coating them with fat and garlic. Add a pinch of salt and a dash of water. Turn heat low and cover the skillet, and let the collards cook, stirring occasionally, until they are tender.

When the squash and collards are both well underway, cook the pasta using the low-water method. Reserve about a cup of the cooking liquid before draining the pasta.

In a large bowl, combine the squash, collard greens, beans, and the cup of pasta cooking liquid. Dump the hot pasta over, and gently combine everything using a tongs or two big spoons. Add the parsley, a pinch of chili flakes, and several grinds of pepper, and taste for salt, correcting if necessary. Pass the Parmesan and a grater at the table.