The world is using more antibiotics than ever before—and showing no signs of stopping. A new analysis published in the Proceedings of the National Academy of Science predicts that worldwide consumption of the drugs will grow 67 percent by 2030. Over the same period of time, in Brazil, Russia, India, China, and South Africa, the authors expect that antibiotic use will double.

The reason for the dramatic increase in antibiotic use, say the authors, mostly has to do with the planet’s ever-increasing appetite for meat. Since the 1970s, meat producers have been dosing livestock with regular, low doses of antibiotics. For reasons not entirely understood, this regimen helps animals grow bigger. In the United States, 80 percent of all antibiotics already go to livestock, and the practice is becoming the norm the world over. This map shows the current global antibiotic consumption in livestock (in milligrams per 10 square kilometer pixels):

Map courtesy of Proceedings of the National Academy of Science

As the middle class in the developing world grows, demand for meat—and use of the antibiotics to grow that meat cheaply and quickly—is expected to rise as well.

To get a sense of how quickly our global appetite for meat is growing, take a look at China. There, livestock producers are buying record amounts of corn and soy to feed a growing number of animals: 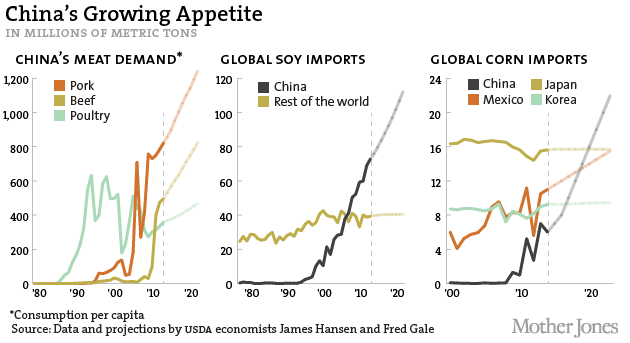 As antibiotic use skyrockets, experts expect that germs will evolve to resist them. That’s scary, considering that some of the same drugs we use on livestock are also our best defense against infections in humans. And suberbugs, several recent studies have shown, can and do jump from animals to people. In fact, another recent study predicted that antibiotic resistant infections will kill 10 million people a year by 2050.

There’s also evidence that antibiotics might soon stop working the way that meat producers want them to: A recent analysis concluded that the drugs are no longer making pigs bigger.

The good news: Despite loose federal regulations around antibiotic use on farms, American consumers are beginning to favor meat grown without drugs. And manufacturers are taking notice: Earlier this month, McDonald’s pledged to serve only chicken raised without antibiotics, and Costco quickly followed suit.