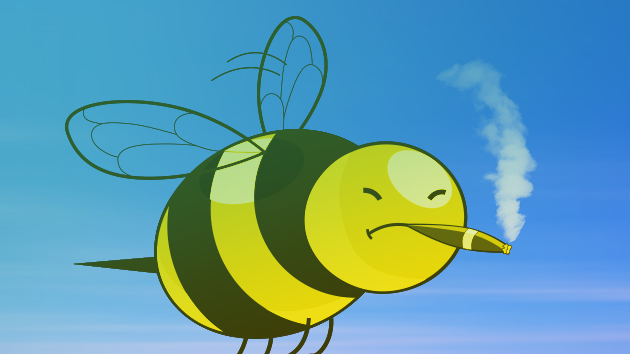 If a ubiquitous class of pesticides called neonicotinoids harms bees and other pollinators—as many scientists think they do—why don’t those buzzing insects just avoid pollen and nectar that contains them?

That’s the question posed by a new study published in Nature by a team of UK researchers. Champions of these chemicals, the authors note, often argue that bees can simply choose not to forage on neonic-laced plants—an entomological twist, I guess, on the personal-responsibility creed often employed by the food industry to defer blame for the harmful effects of junk food.

Far from avoiding neonics, foraging honeybees and bumblebees tend to prefer food laced with it.

What the research team found is remarkable: Far from avoiding neonics, foraging honeybees and bumblebees tend to prefer food laced with it—even though it causes them harm. To test how pollinators react to traces of neonics, the team created controlled environments over 24 hours for both bumblebees and honeybees and gave them two food choices: a straight sugar solution or a sugar solution laced with neonics at levels found in farm-field nectar.

According to the researchers, bees make food choices based on “gustatory neurons in hair-like sensilla” in their mouths. Potential food that’s toxic and/or non-nourishing normally triggers spikes in “bitter”-sensing neurons, alerting the bee to stop eating and move on top something else. The neonic-laced sugar water didn’t generate that reaction for either the bumblebees or honey bees, and so they consumed it freely—and tended to take in more of it than the neonic-free solution.

Why the preference? Here’s how Geraldine Wright, the study’s lead author and a professor at the Institute of Neuroscience at Newcastle University, put it in the press release accompanying the study (ScienceDaily): “Neonicotinoids target the same mechanisms in the bee brain that are affected by nicotine in the human brain.” In other words, while neonics don’t register as toxins, the do give bees the same buzz (so to speak) that people get from a cigarette. Thus the poisons “may act like a drug to make foods containing these substances more rewarding,” Wright added. (Neonics are synthetic versions of of nicotine, and thus chemically similar.

And just as human smokers court all manner of health trouble, the neonic-loving creatures of the study ate less than control groups that didn’t have access to the fun stuff. Cutting calories may sound great for a 21st century American, but it’s not good for beehives relying on well-fed foragers.

Just as human smokers court all manner of health trouble, the neonic-loving creatures of the study ate less than control groups that didn’t have access to the fun stuff.

Because bees evidently seek out neonics, the authors argue, strategies to limit their exposure by planting pesticide-free nectar and pollen sources along roadsides and whatnot—a key element of President Obama’s “Federal Strategy to Promote the Health of Honey Bees and Other Pollinators”—might not by enough. “Instead,” they write, “long-term changes to policy that include reducing their use may be the only certain means of halting pollinator population decline.”

Another recent Nature study, this one by Swedish researchers, provides yet more reason for concern. The team tracked how wild bee populations and honeybee hives fared in 16 fields planted with rapeseed (canola)—half of which had been sewn with neonic-treated seeds, half of which hadn’t. The result: Populations of two kinds of wild bees—bumblebees and the solitary bees—dropped in the treated fields compared to the control ones. They found greatly diminished reproductive success in solitary bees in the treated fields. And bumblebee hives in treated fields showed slower growth and produced fewer queens than their control counterparts—both signs of diminished health.

As for honeybees, the insecticide seed treatment “had no significant influence on honeybee colony strength,” the authors report. That finding is consistent with previous studies suggesting that “honeybees are better at detoxifying after neonicotinoid exposure compared to bumblebees,” they write. But they note that their research took place over a short time—several weeks in summer when canola plants flower—and the “lack of short-term effects does not preclude the existence of long-term effects” on honeybees. And their conclusion is hardly comforting: Neonics “pose a substantial risk to wild bees in agricultural landscapes, and the contribution of pesticides to the global decline of wild bees may have been underestimated.”

Responding to similar research, the European Commission placed a moratorium on most neonic use back in 2013. But here in the United States, the chemicals remain ubiquitous. This spring, US farmers will likely plant 174 million acres of corn and soybeans—a combined swath of land about equal to the state of Texas. The majority of it will likely be with seeds that have been treated with neonics, which are then taken up by the crops and present in plant tissue, nectar, and pollen, ready to poison any creatures that munch (except humans—neonics aren’t  considered toxic to us).

As the chart below chart—taken from a recent paper by Penn State entomologists Margaret Douglas and John Tooker—shows, US neonic use has exploded since treated seeds first hit the market in 1994. That may mean lots of pleasant neural sensations for bees, if the UK study has it right; but it should make any species that depends on pollination for sustenance—like us—think twice. 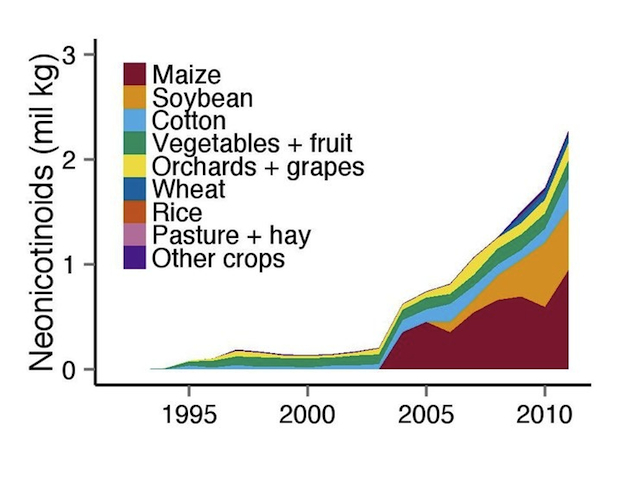 From: Previous Article Next Article From: “Large-Scale Deployment of Seed Treatments Has Driven Rapid Increase in Use of Neonicotinoid Insecticides and Preemptive Pest Management in U.S. Field Crops,” Douglas and Tooker, Environmental Science & Technology.”